Skip to content
You are here
Home > Columnist Archives > Trust: The Essence Of Easter

As I greeted the small, timid faces of my first-graders on their first day of school, I was captivated by a boy who crawled in at cheetah speed and took refuge under a nearby table. Curiously, I bent down and peered into his darkened cave. His retreating dark eyes were full of fear as he said, “Leave me alone!”

So, I did. After all, I had 20 other children coming in who needed my attention, and I was sure he would come out of hiding when the day’s activities began. But, he didn’t. Periodically, I would stop, stoop and smile; but the boy’s glare reminded me that he wasn’t ready to come out of hiding.

Finally, when the other children were settled and occupied with an assignment, I stooped and inched my way under the small table, and sat down. The boy’s back was against the wall, his knees against his chest, and his arms locked around his legs. Intimidated by my presence, he moved as far away from me as possible without leaving the security of his shelter. “You must be Tomart,” I said. “I’m so glad you’re in my class.”

His response was quick and sure. “No you’re not!” he snapped.

“Would you like to come out now and have some fun with us?” I continued. He shook his head furiously. “We will be having lunch soon, and after lunch we will go outside to play,” I explained.

His eyes brightened with a sudden warmth. “I want to play,” he said.

“I like to play too,” I said. He stared in disbelief.

I was very uncomfortable in Tomart’s cave. Yet, to bring him out of his newly acclaimed refuge, I knew I had to enter his “world,” show him a way out, and assure him that I would be there for him. Crawling under the table that day with Tomart reminded me of what God has done for us. Did He not stoop lower than the angels and become one of us? Did He not subject Himself to His own creation by coming into our world? “Yet what is man that thou art mindful of him? or the son of man, that thou visitest him (Hebrews 2:6)?” Why did God crawl into our darkened, sinful cave and ask us to come out? When we refused His plea, why did He continue to beckon us?

“It’s going to be alright,” I whispered as I gently touched Tomart’s propped-up knee. “Trust me.” I crawled out of Tomart’s warm, dark hiding place and gave my attention to the other children. After a short while, I saw Tomart’s head pop out from under the table. I showed him his deask and he cautiously sat down as his penetrating eyes met the stares of his classmates.

I knew that in order for me to be able to teach Tomart, I had to develop a trustful relationship with him. Our Savior strives to establish a trusting relationship with us. He crawled into flesh and came into our uncomfortable, sinful world and allowed His beaten, unrobed body to hang between heaven and hell in an open demonstration that He had given all. The birth, death, and resurrection of our Lord proved that we could trust Him and Him alone. We can not trust man (Jeremiah 17:5), friends (Micah 7:5), ourselves (II Corinthians 1:9), or even our own hearts (Prov. 28:26), like we can trust Jesus.

Trust is a vital part of any relationship that is meaningful. Yet, trust is not granted; it is developed. With time, Tomart came to trust me and I was able to teach him. Several years later, I visited the school where I had taught Tomart. While hurriedly walking through a learning center, I heard someone shout my name. I scanned the group to find a familiar face, and there he was, running toward me with outstretched arms and a smile as wide as Texas.

“Tomart!” I squealed, as his long arms wrapped around me. His embrace spoke of gratitude and most importantly, trust.

Perhaps when America’s founding fathers stamped “IN GOD WE TRUST” across our currency, they knew that the success of our nation depended on citizens that would trust in God. Yet, for many in our society today, a trust in God has been replaced with a trust in the coin. We should remind ourselves that we cannot trust the false security of our world.

Since this Easter marks my 25th spiritual birthday, I have been reflecting on the faithfulness of a perfect Redeemer. He has been my shield, my provider, my refuge, my healer and my Savior. He truly has directed my path.

As we crawl out from under the “table” and echo the words of the Psalmist, “…in thee do I trust: cause me to know the way wherein I should walk …” (Psalm 143:8), I believe we will see afresh our resurrected Savior standing between the shadow of a blood-stained cross and the glow of an empty tomb, reassuring us: “Trust Me!” After all, God knows those that trust in Him (Nahum 1:7), for trust is the foundation of faith.

We Have A Good number of people receiving the Holy Ghost each year, but very few seem to stick. What are we doing wrong? 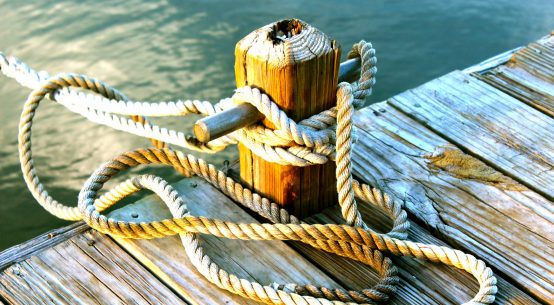