Pastor Tom Copple glances at a book on his shelf, written by somebody many have considered a secular visionary: “Lee Iacocca said in his biography that if you want to see 10 years ahead in America, look at California today. This area of the country, Iacocca said,  portrays for us “the America of tomorrow.”

In particular, California boasts a great diversity of nationalities and a powerful immigrant influence. It’s also a very prosperous part of the country, and it’s one where eastern religions are booming. If this is the America of tomorrow, then the church of tomorrow has to develop a greater vision to reach these people.” Indeed, Santa Ana’s Spirit & Truth Worship Center one to great lengths to become an inclusive church ministering to all different lifestyles.

They have apparently achieved considerable success: At the church’s last count, they had 15 different nationalities represented in their congregation. This is at least part of the reason behind the church’s growth from 60 to 200 since the 40-year-old Brother Copple assumed the pastorate in 1992. In Santa Ana, it seems that Tomorrow’s Church has arrived a few years early.

The making of a Tomorrow Pastor actually starts in the past. Brother Copple was raised in Centralia, Illinois, as a fourth generation Apostolic. His grandfather was Timothy Urshan, the brother of A.D. Urshan. His mother immigrated to the United States from the Middle East, during her youth, and lived with Brother and Sister N.A. Urshan, who was pastoring in Indianapolis. Sister Copple died when Tom Copple was still a child, and he was subsequently raised by his father. His uncle, Jonathan Urshan, served as his primary spiritual influence, since the Copples were attending his church in Centralia.

“Missions literally runs in my blood,” said Copple. “My grandfather was a missionary and his brother was a missionary. Consequently, I have always had a love for other nationalities.” It’s a love which would later serve Copple well during his pastorate in Orange County.

Copple received the Holy Ghost when he was 12. At age 18, he felt a call into the ministry and went immediately to Jackson (MS) College of Ministries and graduated in 1980. Following graduation, he served as youth minister and associate pastor for seven years at a church in DeRidder, LA. During this time, he married Sara Starr; the couple then evangelized for five years. In the autumn of 1992, he was invited to try out for the Santa Ana church by the ailing pastor, which he did. The congregation, on the former pastor’s recommendation, voted in the Copples, who began their pastorate in October.

A vision that God gave Copple years before coming to Santa Ana has guided his ministry since: “I knew when I was 19 what God wanted to do with my life, because of this vision. In the vision during a prayer meeting, God showed me a multinational church, with all nationalities, worshiping God together. I actually heard the sound of the praise; it was a powerful experience for me. After that, at night, I would frequently dream about Southern California. Consequently, I had felt for some time that God would lead me to Southern California, where I would lead a multinational church. And that’s what we have here today, with all races and cultures praising God together.”

It’s not just in the diverse congregation that Spirit & Truth Worship Center represents the Church of Tomorrow. It is also on the cutting edge of becoming a regional, rather than merely a community, church. And with the proliferation of “mega churches,” this is a trend that is sure to make more of an impact on the church world.

“We live in a huge seedbed of megachurches. Our church is within four miles of Crystal Cathedral, which has about 12,000 members. Chuck Swindoll’s former church is right up the road, and the fastest-growing church in the nation, Rick Warren’s, is 20 minutes from me. Also, Calvary Chapel is in Santa Ana, just three miles from our church. So people are driving past these huge megachurches to come to our church.” That’s fortunate, since Spirit & Truth is one of only five UPCI churches in the entire county of three million people.

But what causes 200 people to traverse the miles and bypass these other, better-known churches for the Spirit & Truth Worship Center? Copple says that in Southern California, a focus on excellence is the key.

“I had a person tell me once, -`If you won’t be intimidated by the wealth and decadence of this area, and if you have a good product, you will find people want what you offer.’ I’ve found this to be true. This is a high-income area. Orange County has been voted in many years as one of the most desirable places to live in America. It is also one of the most expensive places to live. Still, it’s a highly desirable place to live, with a near-perfect climate.

“People here look for excellence, and so excellence has become our ultimate pursuit at our church. One of my key phrases is, `Excellence honors God.’ I’ve developed a culture of leadership in the church who operate under that philosophy: ‘How can we do this in a more excellent way?”

Copple relies heavily on that culture of leadership to help with the church’s tasks. He said that a church that reaches or surpasses the 200 mark must develop a different mentality than the smaller church. “At that point,” he said, “you have to change from a shepherd paradigm to a rancher paradigm. That is, you don’t try to take care of everybody’s problems yourself; you get people to help you. I have several people in key leadership positions, and I now pastor them. They in turn actually pastor the people of the church.”

“Seventy-nine percent of our total adult members are involved in at least one ministry of the church,” said Copple, “so they have become a valuable resource.” To promote involvement, the church has an annual job fair, held in place of their regular midweek service. “We set it up like a convention, with booths representing every person a survey to determine their talents, personality type, and where their burden lies. So at this job fair, people roam about the booths and see where they want to work.”

While Spirit & Truth Worship Center has tried most of the traditional outreach methods, Copple outlines a half-dozen that have contributed most positively to growth at the Santa Ana church. For instance, there is home Bible study, telephone evangelism, and what they call “Home Friendship Groups.”

“There are 31 cities total in this area, and our vision has always been to have one strong mother church and then to plant local churches in these cities. However, many of these cities will not allow you to put a standard church within their city limits, because they don’t want to lose their tax base; they make too much money off of real estate. So in order to get into those cities, we have to operate through home friendship groups, where people meet in individual homes for Bible study and fellowship. We feel like this is a completely Biblical model. In the book of Acts, the early church used both temple worship and home worship, and that’s exactly what we do.”

Other programs that Copple cites as effective for them are their children’s “Super Church” program and Harvest Sundays. “This is a monthly Sunday evangelistic service that we have focusing specifically on unchurched people.” Also important: The church’s “WAR” department.”

“WAR is an acronym for ‘Warriors Advancing Revival.’ It’s a special prayer and intercession ministry that offers spiritual support for every other ministry in the church.”

Spirit & Truth’s history during the past decade has been one of breaking many barriers. First, they broke racial barriers. Then they broke the 100 barrier that, for so long, seemed insurmountable:

“One of the biggest obstacles we had to overcome when we first came here was the mindset that said the church could not surpass 100. It had been under 100 for 32 years, but after continuous motivation, the church came to see it was possible, and of course, we finally broke the barrier. Our friendship groups were a key part of that growth. I spoke at a ‘Church Growth 2000’ conference on ‘Breaking the 100 Barrier.’ At that meeting, I told the people to remember that an organism does not grow by having its individual cells get bigger; it grows by multiplying the cells. And that’s been a large part of our growth: growing the `cells.'”

Meanwhile, more barriers await the church in the future. There is the challenge of paying off their current facility; of acquiring a new facility (since they’ve nearly filled the current one); and others. They no longer intimidate either the congregation or the pastor, however. They welcome the challenge. Today’s challenges, they have learned, are tomorrow’s victories. For a “Tomorrow Church,” barriers were made to broken. 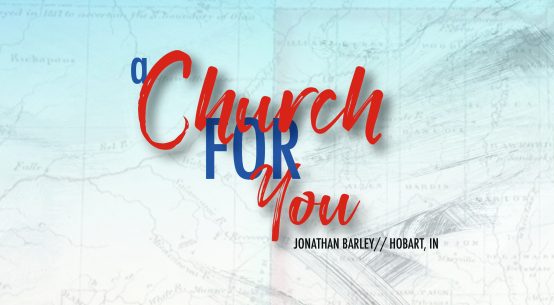