“At New Life Fellowship in Terre Haute, Indiana, there are two words that embody what we do,” said Pastor Jeff Harpole. “Those two words are intentional and deliberate. We envision it before it happens.” In the past 14 months, this powerful growing church has baptized 141 precious souls, and 103 of them have received the Holy Ghost.

Raised in a pastor’s home, Bro. Harpole developed an intense love for people and a passion for the ministry of love and compassion. Those who enter the doors of New Life Fellowship immediately encounter smiling enthusiastic saints who mirror the love and compassion of their pastor and his lovely wife, Tami. They have 3 sons: Roman (11), Reagan, (8), Nico (5) and one daughter, Alexandra (7).

Pastor Harpole explained, “We use the three P’s at New Life Fellowship: programs, personnel and properties. We embellish all three of these in every department of our church, from our hostesses and greeters to the golf carts which transport our visitors. We feel that everything from our trained staff to our church properties should be inviting and should speak to our guests. We never want to wonder how it happened. We understand the ‘what’ and the ‘how,’ but we are mostly concerned about the ‘why.’ Our beautiful coffee shop doesn’t just serve coffee, but we are concerned about serving smiles and creating relationships there with our guests.”

Pastor Harpole’s extraordinary vision of ministry focuses on relationships in every aspect. “Before Jesus called His disciples, He related to them in their occupation of fishing,” he said. “Although the most important principle is doctrine, we have to be about relationships and approaching people through relationships, because retention is the key to church growth. At New Life, we use one vision and singleness of purpose.

“I want to get back to a New Testament Bible church. The early church had two venues of ministry: 1) they were daily in the temple and 2) they were house to house, breaking bread. They didn’t just go to church. In Acts 6, as the church grew, others were trained for administration. I grew up in a pastor’s home, and many pastors were conflicted with administrative duties. It is important that we let the ministry perform the ministry. We need both ministry and administration in order to succeed.”

Pastor Harpole said, “If I am to maximize my time, then I must develop leaders. At New Life Fellowship, we don’t use words like ‘releasing people,’ but we use words like ‘equipping people.’”

The departments and ministries of New Life are many. Among them are Music Ministry, Kidz, Hospitality, Elevate Drama, Student, Singles, Young Marrieds, College & Career, and a Senior Life Group. Other ministries include Bible Quizzing, Small Groups and a Hispanic Ministry. “Our goal is to develop 50 groups in our Small Group ministry,” said Pastor Harpole. “Our Vacation Bible School had 200 kids, and on Parents’ Day at our Little Life Daycare program, 440 non-churched parents and relatives attended.”

“If you organize, people have anticipation, and anticipation brings participation,” explained Pastor Harpole. “We have a staff meeting every Tuesday and a director’s meeting every month. I also meet with directors individually each month, and directors meet with their staff each month. All staff members hand in reports to their directors, and directors hand in monthly growth reports to the pastor each month. Their calendar becomes their weekly bible, and all have job descriptions. We use a book titled The Ministry Development, have intense planning sessions on a weekly and monthly basis, and work the calendar.”

About 60 percent of the New Life members are very active in some form of ministry, according to Pastor Harpole. He personally teaches several Bible studies on a weekly basis and authored a Bible study called the Tabletop Bible Study.

New Life Fellowship dedicates 30 days each year to prayer and fasting. At that time, they commit to giving 300 Bible studies to friends and family. This year, they are planning the Block 300 outreach by hanging 3,000-plus door hangers in the city. Their goal is to reach out to thousands of souls.

“Our special miracles were two babies,” said Pastor Harpole. “One baby’s parents had never come to church and knew nothing about God. When baby Hadley was born, her intestines weren’t formed. The 8-day-old baby, destined to die, was placed on sugar water. We were asked to come pray for the baby. Pleading the blood of Jesus, we prayed for Hadley, and within 1/2 hour, she was healed.

“Another miracle occurred with a baby born to the sister of a bank teller at our local bank. Baby Elsie had been in the hospital four months with a blood disease and had been placed on dialysis. We were called to pray, and the baby was completely healed. All of the bank tellers now attend our church, and we have baptized three of them.”

“Self sacrifice is the basis of the ministry,” said Pastor Harpole. “The Prayer of Jabez sold millions of copies, there is no book called The Prayer of Gethsemane. Yet, that is where we must begin. Accountability to prayer, personal stewardship, and the study of the Word is vital in preserving integrity.”

The focus of Pastor Harpole’s ministry is not limited to any one culture. He notes the rule of the sower: “Sow indiscriminately, and sow as much seed as you can. By trying to reach a certain group, you are limiting yourself.”

Pastor Harpole said the church’s new facility is Phase I and will become the Family Life Center. It has a seating capacity, including the platform, of 700. “This facility includes nine classrooms (which we are already outgrowing), a commercial kitchen, and coffee shop,” he said. “The facility’s unique feature is the combination of music media and a technologically advanced media system. The church property consists of 14 acres on Highway 40. It was valued at over $500,000, but the Lord helped us purchase it for $250,000. We plan to build a new sanctuary in front of our present facility that will seat 1,500 to 1,800. The current attendance at New Life Fellowship is approximately 500. There were 50 people when I assumed the pastorate of the church in October of 1999.”

Pastor Harpole grew up in Troy, Missouri and was raised in church. He received the Holy Ghost at eight years old and felt his call to ministry at 14. He was active in Bible Quizzing in his youth and began his ministry by preaching his first sermon at 17. His educational background included Missouri Baptist University, with a B.S. in Business and IBC with a Masters in Theology. He traveled with the Carouthers music group and helped to write the song “Mercy Seat” with Steve Richardson and Mark Carouthers.

Pastor Harpole was deeply influenced by many great people of God in his life, but none greater than his own mother and father, who pastored in Missouri for many years. He is greatly influenced by Bro. Paul Mooney, and spent five years attending Calvary Tabernacle in Indianapolis. A major turning point in his life was in 1994 when Bro. David Trammel helped him go to France. He has a great respect and honor for his former pastor, Bro. James Stark, with whom he assisted for five years.

While evangelizing, Bro. Harpole felt that God was changing his direction. When Bro. Mooney introduced him and Sis. Harpole to the church that later became known as New Life Fellowship, they fell in love with the people. The church had multiple pastors while it was at the old location. Pastor Harpole noted how thankful he is for the new facility, “The old sanctuary lights didn’t work, the sound system buzzed, the pews were old and dark, the roof leaked, and the windows housed a ladybug farm.

“At the first service, we just smiled at everyone and immediately began casting a vision. Later, when the board members took us to dinner, I noticed the land the church now sits on, and discussed the potential of purchasing that land.”

In those early years, his outreach concept was simply this: “Jesus is always the customer. It is always about Him. Preach Jesus and Him crucified, and if you can get Jesus in His proper place, everything else falls into place.”

Asked what he does in his leisure time, Pastor Harpole replied, “I have four children, so the answer is family time.” Included in that family time, of course, would be the pet boxer, Georgian Bailey. His favorite author is C.S. Lewis, and he is in the process of writing a book of his own about ministry transition, titled Changing Faces.

Building On A Rich Heritage 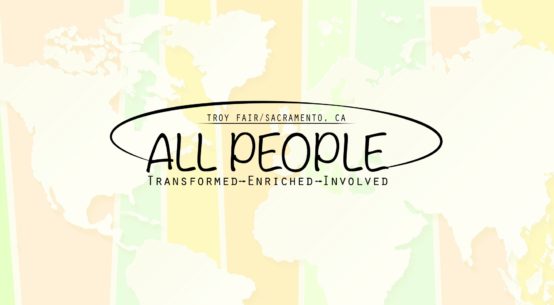