William Felt, Union City, CA — I am not an expert on the subject of casting out demons and frankly have not given it much thought as to why we aren’t seeing it as much today. Perhaps mankind is doing a good enough job without their help. Without naming names, I can think of a time when a young girl was praying at our altar and as we prayed with her she started acting very strange. We started calling on the name of the Lord, and she acted up even more – that was the key that let us know she was demon possessed. We kept praying for her, and she was delivered. For God to deliver a person from a demon is no harder than to deliver a person from alcohol. It has been my experience that a person has to want to be delivered. This said, I also believe that working under the gifts of the Spirit can assist us in taking control over such powers.

Bruce J. Bartel, West Kelowna, BC, Canada — There are a lot of misperceptions when dealing with the demonized. That, along with unfamiliarity and concern for being misunderstood or “labeled,” causes most to just shy away from the subject. However, I have had experience in casting out demons. Assisting in deliverance can be varied depending upon the individual’s understanding and will. Regarding deliverance, “My people are destroyed for lack of knowledge…” Hosea 4:6. It is imperative to (1) know your place and authority in Jesus, (2) discern what stronghold you are dealing with – be it mental, physical or spiritual, and (3) work with the individual as to their will in regarding the stronghold – as you cannot cross the will of man – a demon cannot do what we do not consent to (consciously or subconsciously). In this regard, repentance and/or forgiveness are the focal points. Deliverance is simple and easy IF preparation is done correctly.

Glenn T. Howard Jr., San Antonio, TX — It is my opinion that there are several reasons we don’t see more casting out of demons today: First, true “demon possession” occurs more in undeveloped or third world countries than in developed countries such as the U.S. and Europe. In the developed countries, people are greatly demon deceived, but not necessarily demon possessed. Second, unlike the infinite supply of the Holy Ghost, there are just so many demons, and with the population of the earth more than 10 times what it was in the days of Jesus there are only so many places they can go. Thirdly, it is my conviction that the effectiveness of “casting out demons” is significantly determined by the degree of personal commitment to the disciplines such as fasting and intensive prayer in order to induce personal sensitivity and enhanced power of the Spirit of God. Fourth, once a demon has been cast out, the person who had it must commit himself or herself to obey the gospel of Acts and live for God. If they don’t, they are putting themselves in the position of being re-invaded by demons.

Charlie Scully, Morehead, KY — Let me share an experience that occurred when I was a young child, about seven years old. A man came into church and kept being disruptive; suddenly he jumped up and ran at our pastor with the intent to kill. A deep voice began to speak from the man’s chest as he spit and cussed. A Sunday school teacher took the kids onto the platform where we sat, held hands, and prayed as our pastor cast the demons out of the man. After he was delivered, we found that he had been in the Satanist movement, burned Bibles, and had been sent by the spirits that night to kill our pastor.

My advice for a young pastor should he encounter a person needing deliverance from demons? 1. Be submitted to God (James 4:7). 2. Ask the individual if they want and are ready to be delivered, if their answer is “no” then you either persuade them through love (I John 1:8) or command them to leave the premises. 3. If the answer is “yes”, then have someone gather the children and take them somewhere safe to pray; you never know what the unclean spirits are going to say or do, so always get any kids away. 4. Be firm and maintain control of the conversation; you have the power (Acts 1:8), and greater is He that is in you (I John 4:4). 5. Persistently command the devils to come out “in Jesus name” (Mark 16:17). 6. Continually encourage the one seeking the deliverance — “Jesus is here to deliver you!”

Isaac Soria, Alameda, CA — You must first ascertain whether or not the person wants deliverance. Hard-core Satanists and sorcerers don’t want deliverance. Many get possessed on purpose and/or work with their spirits for supernatural powers. Then, stay prayed up and full of faith. The power to command devils, rebuke them, and cast them out is all based upon faith. Your faith has to be strong. You have to believe they are possessed and that you have the authority to cast them out. Also, use the gift of discernment. The discerning of spirits is probably the most common gift most people have in the church. Yet most don’t realize they have it. You have to do what Paul said, “But strong meat belongeth to them that are of full age, even those who by reason of use have their senses exercised to discern both good and evil” (Hebrews 5:14). You have to exercise your senses to discern what spirit they have, whether it’s simply someone with a purely physical mental disorder or something natural (like drugs, neurological problems, etc.) or if it’s a real spirit involved. Then you have to discern whether it’s demonic oppression or actual possession. If you really have discernment, you can tell a lot by looking in their eyes. Jesus said, “The light of the body is the eye: therefore when thine eye is single, thy whole body also is full of light; but when thine eye is evil, thy body also is full of darkness” (Luke 11:34).

S. Carter, Staten Island, NY — I personally believe that one of the reasons for demonic behavior is to disrupt the moving of God’s Spirit as God’s people worship. When there is strong leadership in the pulpit and a scriptural knowledge among the congregation, there is less demonic demonstration. When it occurs, prayer and faith in God’s deliverance soon overrides the powers of the enemy. It is very important to take the situation very seriously and concentrate on the power of Jesus Christ. The spirits are subject to Jesus’ power and through faith in His power and name demons will flee.

I heard the sound of a dog barking while sitting in a worship service. Looking around, I found a young lady that was obviously under a spiritual attack and giving out this sound. The pastor stood and directed everyone to begin to call on the name of Jesus for deliverance; as we prayed that same evil spirit went out of her into another young person who was idly sitting a few pews away. Prayer was once again administered to her for deliverance. We must pray with the authority that God has given us over every evil spirit and practice. If possible, remove the person to another room so as to not stop a service in progress, have others with you for this need, and command the evil spirit to leave. Instruct the possessed individual to call on Jesus for deliverance.

Ken Gurley, Pearland, TX — Both angelic and demonic activity was intense at the Lord’s first coming and will also be prevalent in the last days. One case I’ve experienced involved a person who was being especially boisterous and increasingly belligerent in a church service. The person’s behavior ran counter to what the Spirit was doing in the service and the more the Spirit moved, the more contrary the person’s behavior became. As the church worshipped, a few ministers joined with me to approach and pray for the man. He confessed his need of deliverance and we claimed his liberty through the blood, Spirit and name of Jesus. He was marvelously delivered and serves the Lord to this present time.

Demons don’t need to be sought; they will reveal themselves when the Gospel is preached and Apostolic power is demonstrated. Since carnality, spiritual wounds and personality idiosyncrasies are often confused with demonic activity, we should pray for the discerning of spirits to perceive the source of the problem and act accordingly. Finally, to the degree possible, the prayer for deliverance should simply be part and parcel of an Apostolic church service — not singled out for special attention above prayer for the sick or laying on of hands for the Holy Spirit. In all things, elevate Jesus and not the enemy.

Kurtis Burton, Nashville, TN — In the New Testament at least 14 times demons are recorded being cast out of people by Jesus and the Apostles. There are reports of people being delivered today. We hear about this more overseas than stateside. I believe today’s Pentecostal services are more conducive to time restraints, music programs that entertain and positive speaking. God help us, but we need power in our pulpits and anointing in our altars. I can recall a revival I was in as an evangelist praying with a lady who after I prayed and laid hands on her she fell down rolling on the ground speaking gibberish with her eyes rolling around in the back of her head. Immediately the pastor knew exactly what was happening, knelt down beside her and began rebuking the devil in Jesus name. In mere moments the woman was speaking in tongues calling on the name of the Lord. Her testimony that night was that as a girl her family was heavily involved in black magic and witchcraft.

My advice in a tense atmosphere would be to take immediate control of the circumstances and let that demon(s) know that you are totally in charge. Don’t be intimidated, plead the blood and cast out that spirit in Jesus name! We who are spiritual are to restore and bring deliverance to each and every captive. Mark 16:17 confirms to us, “And these signs shall follow them that believe; In my name shall they cast out devils.” We who are born again have power over the devil. 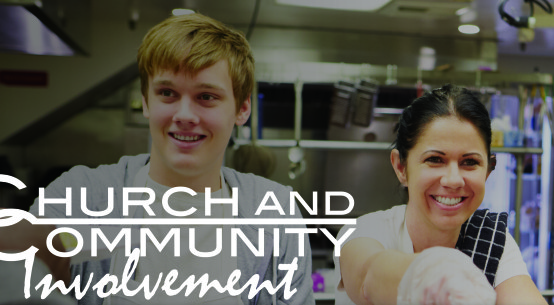