Skip to content
You are here
Home > In This Issue > Feature > That All May Come – Pastor Rick L. Stoops – Augusta, Maine “That all may come” is certainly the focus of the First United Pentecostal Church in Augusta, Maine. Pastor Rick L. Stoops and his wife, Shari, have pastored the church since 1982 with that specific focus. They have three sons: Eric (38), Shane (36), Zachary (20) and one daughter, Sararuth (30).

The Stoops planted a church in 1976 in Waterville, Maine and in 1982 were asked to pastor the First United Pentecostal Church of Augusta when the pastor, Bro. Willhoite, and his wife became missionaries to Wales, England, UK.

“A revival pastor must keep his hands in the harvest to stay on the cutting edge,” said Bro. Stoops. “He needs to teach at least one or more home Bible studies per week. I teach four to five. A revival pastor needs sufficient time in prayer and study to bring Holy Ghost-anointed messages from God’s Word. This reduces time spent in counseling. God can do more in five minutes of powerful Holy Ghost, laser-accurate preaching and teaching than multiple hours of counsel.”

Ministries of the church include Home Bible Studies, Bus Ministry, and an Easter Passion Play that is advertised to the community. “The church strives for top quality worship, and we saturate the area, once a year, with a bulk direct mailing to all within a 30-minute drive of the church,” said Bro. Stoops. “A non-Apostolic church grows for the same reason a business grows: high quality of friendly service, good music, nice facilities, prime location, an organized approach, an articulate presentation of the Word of God, and excellent youth and children’s programs. All of these are important, but above all else, an Apostolic church needs to please God. Joshua and Caleb gave insight into this when they said: ‘If the Lord delight in us, then he will bring us into this land and give it to us; a land which floweth with milk and honey’ (Numbers 14:8). Many times guests will feel the Spirit and anointing of God from the opening song of an Apostolic church that is walking within its covenant.

“A growing church needs to target people of influence in the community who will influence many others to turn to Christ, as well as the down and out. There is precedence in the Bible for targeting people of influence. Joseph targeted Potiphar, the keeper of the prison, the King’s baker and butler, and ultimately Pharaoh himself. This produced a revival that literally saved the children of Israel from extinction. Hadassah witnessed to the Persian Emperor, became Queen Esther, and saved her people from annihilation. A maiden witnessed to the wife of the captain of the Syrian army, and Naaman was miraculously healed. Philip was led by the Spirit to witness to the Treasurer of Queen Candace of Ethiopia, and great revival followed that has continued to this day. Too many Pentecostals are intimidated by the professionals in their community and only feel comfortable witnessing to the poor and destitute. We also need to witness to our doctors, lawyers, politicians and business people. No one should go to hell simply because he is a hard worker and successful in business. We reproduce the clientele we target. A church that targets only the down and out will struggle, because like begets like. A hunter does not shoot at a rabbit and kill a moose. He hits what he targets.” Bro. Stoops noted that since they began targeting people of influence, the Governor and First Lady of the State of Maine, members of the Governor’s cabinet, and several state senators and representatives have attended. One Maine state representative is a member of the church, and they have won three doctors, several business owners, nurses, a high school band director to the Lord, and many others have converted to the faith.

Departments and ministries of First United Pentecostal Church include Greeters, Ushers, Music, Elders, Sunday School, Youth, Internet, Men, Ladies and a Knitting group that makes prayer shawls for people who are sick as well as for wives of state or city leaders who visit the church. The elders anoint the prayer shawls with oil, and they are given away.

“A good percentage of our people are in some type of ministry, and a large percentage are involved in evangelism. A growing church must continually have its eyes upon the fields, or it will cease to grow and begin to have conflicts. I have made it a point to teach the benefits of involvement in the Kingdom. The happiest Christians are involved Christians.” Several years ago, a pastor took Bro. Stoops to tour a large church in his city. Bro. Stoops was amazed to find that although the church had little Biblical truth, many had come there and had received notable miracles and healings. He said, “Crutches were on the walls as silent testimony to God’s healing power. I went to the Lord in prayer, feeling troubled that too many Apostolic people were going without much needed miracles, while people who did not know the truth were receiving miracles. God showed me that His healing power is given as a result of faith. He will honor faith wherever He finds it. You can be strong in doctrine and weak in faith. We need both! God began to deal with my heart about being an ambassador of Christ. I was reminded that an ambassador is appointed to do what his sovereign would, if he were present. “God confirms the word of his servant and performs the counsel of his messengers” (Isaiah 44:26).

Bro. Stoops realized he had been waiting for God to do the miracle, while God had been waiting for him to speak so he could confirm and perform. He explained, “The Apostle Peter told the lame man, ‘Such as I have give I thee.’ Jesus said, ‘Whatsoever you bind on earth shall be bound in Heaven. As the Father hath sent me, so send I thee. Say to yonder mountain − be thou removed.’ Many more miracles will happen if we, as His ambassadors, leave our comfort zone and speak the word of faith. Since receiving this revelation, I have seen crossed eyes uncross, color blindness healed, a deaf ear healed, a leg grow, cancers healed, backs healed, chronic pain healed, the dead raised, and a woman who had not stood for ten years stand instantly as the result of a one sentence command, ‘Be healed in the name of Jesus!’ One significant miracle can propel a church into great revival!”

Pastor Stoops said he is entirely dependent upon being led by the Lord. “And I appreciate the benefits of belonging to the greatest ministerial fellowship in the world,” he said. “The UPCI has put me in contact with the greatest preachers and influencers of our times.

“Growing churches preach to sinners. It is non-productive at best and destructive at worst for the preacher to preach to saints and ignore the guests. Preach the power of the blood to wash, the power of the Holy Ghost to fill, and deliverance of the captives. You will get what you preach.”

“Our sanctuary seats 550,” said Bro. Stoops. “But it is not unusual to have 1,200 on Easter weekend in four services. We have had 60 filled with the Holy Ghost since January of this year, and we recently purchased acreage next to our sanctuary for future growth. In 1984, we were just entering a building program when I went to General Conference. During the Foreign Missions service, I felt impressed by the Lord to take on every missionary as partners. I argued with the Lord that we were launching a building program, but the Lord persisted. When we arrived home, a preacher friend called, asking if we were planning to build a new building. He had found enough beams for a 60′ x 120′ structure. They were valued at $40,000, and we purchased them for $3,500.”

In 1938, 17 years before Bro. Stoops was born, his father, Resal Stoops, took his wife and her family to Bro. Charles Rigdon’s church in Whitehall, IL. “My father had no knowledge of truth, but he had heard about the baptism of the Holy Ghost and wanted to receive this gift,” said Bro. Stoops. “As a result of that single invitation, there are at least 17 Apostolic preachers in our family today. Other converts of that revival were my aunt, Sis. Nilah Rutledge Mean, whose convert was a nun named Sis. Charlotte. Under their ministry, two of our General Board members, Bro. T.F. Tenney and Bro. Mike Conn, were converted. There are literally thousands in the Kingdom because of one single invitation.”

Bro. Stoops was born in Granite City, Illinois and grew up in Caseyville, Illinois. He attended a church pastored by Bro. Everett Lowery as a small child. “I received the Holy Ghost at age 9,” he said. “My mother, Rev. Edith Stoops, my sister, Pastor Sharon Springer Walston, and Rev. Audrey Feigl started a home mission church in Caseyville. I preached my first revival at age 16, became a licensed minister at 17, and started my first church at 21. One of the converts from my outreach at Collinsville High School was Bro. Harold Williams, who later became pastor of the United Pentecostal Church in Maryville, Illiniois. I attended Gateway College of Evangelism from 1973-1976, where Bro. W.C. Parkey, Bro. Paul Dugas, Bro. Jacob Nelson and others helped shape and mold my ministry. My mother was always involved in the work of God and was the greatest influence in my childhood. My wife, Shari, is my most loyal supporter and the best pastor’s wife a man could ever want.

“What many people probably don’t know about me is that I am a pilot and have a Cessna 172 that I use to travel all over our district. I can be just about anywhere in two hours, and Maine’s scenery of rocky coastlines, rolling mountains, forests and picturesque waterways is more fully enjoyed from the sky.” Revival Inside and Out 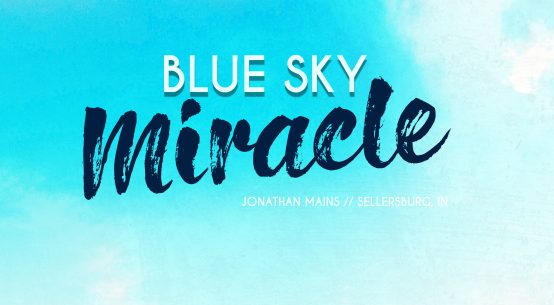