“As a deer panteth after the water brook, my soul, O God, panteth for thee” (Psalm 42:1). There was something in the heart of the Psalmist that wasn’t content to simply exist. There was a passion in his heart for the presence of God. Oh for a church, for a ministry that would desire something more than just going to church, just going through the motions, but for a people in this generation that would make up their mind: “Give me a passion, O God, for Your presence!”

The greatest dilemma of the church is not buildings; it’s not programs; it’s not even good church. The greatest dilemma of the church is prayerlessness. The church at large is very anemic. There is life, but little life-sustaining force that can help us to overcome sin and live in a state of commitment, to love our brother, to hunger for revival. The church is anemic in the area of prayer. Busyness, carelessness, materialism, and all sorts of other excuses, but no real reasons, filter through our minds and tell us we don’t have time to pray. But I declare we don’t have time NOT to pray. If there ever was a world that needed a praying church, the church needs to pray right now.

Ultimately, the reason for the lack of prayer is spiritual lethargy and laziness. Leonard Ravenhill writes in his book, Why Revival Tarries, in chapter two: “Prayer grasps eternity. No man is greater than his prayer life. The pastor who is not praying, is playing. The people who are not praying, are straying. The pulpit can be a shop window to display one’s talents; the prayer closet allows no showing off. Poverty stricken as the church is today in many things, she is most stricken here in the place of prayer.

“We have many organizers, but few agonizers; many players and payers, but few pray-ers; many singers, few clingers; many pastors, few wrestlers; many fears, few tears; much fashion, little passion; many interferers, few intercessors; many writers, but few fighters. Failing here, we fail everywhere.”

True revival doesn’t come from methods; it doesn’t come because a certain preacher or speaker comes by. True revival comes through God in prayer. You remember those days when we didn’t leave until everybody who came to the altar prayed through and received what they came for. But we can hardly wait to get our coats on and make it to the local restaurant now to fellowship.

The enemy has stolen rich, lengthened, powerful, war-raging, hell-dousing prayer from under our noses. We’re not a people of prayer. We’ve become dependent on our talent. We’ve become dependent on our messages, on our flesh, on our evangelism for church growth. We preach about Azusa, yet we don’t pray like Azusa. We pray about the day of Pentecost, but we forget the long hours of prayer it took for the Pentecostal baptism to fall. We preach about revivals of yesteryear but we don’t pray like yesteryear, and we wonder why we’re not having the revivals of yesteryear. G. T. Haywood, James Kilgore, and many more would stand as a witness to that. Many of us now expect from preaching what God said He’ll only give us as a result of prayer. We’ve become flesh-centered.

“If my people, which are called by my name, shall humble themselves, and pray” (He didn’t say ‘sing,’ or ‘preach,’ or ‘worship;’ He said PRAY), “and seek my face, and turn from their wicked ways; then will I hear from heaven, and will forgive their sin, and will heal their land” (II Chronicles 7:14).

You want God’s attention? Here, I’ve got it for you in the next verse: “Now mine eyes shall be open, and mine ears ATTENT unto the prayer that is made in this place.” There’s no other way to get the attention of God. There’s no other way to be able to hear from God until you are willing to humble yourself in the presence of God, and ask Him to wash you, and cleanse you, from the top of your head to the soles of your feet. And as He does that, there will be an ushering in of the glory of God in your life that will transform you.

In Matthew 5:44, Jesus said, “But I say unto you, Love your enemies, bless them that curse you, do good to them that hate you, and pray for them which despitefully use you, and persecute you.” Quit making excuses why you don’t pray! Quit telling folks about all the ways you’ve been done wrong. It doesn’t make any difference! Lay it all at the feet of Jesus. Let the Lord take care of everyone who has persecuted you, stood against you so you “can’t get in the presence of the Lord” because you’ve “been done wrong,” because you’ve “been hurt.” You can’t quit praying! Get in a prayer room somewhere and get ahold of God. Get a secret burden!

“But thou, when thou prayest, enter into thy closet, and when thou hast shut thy door, pray to thy Father which is in secret; and thy Father which seeth in secret shall reward thee openly” (Matthew 6:6). Herein is the “secret burden.” It follows a progression: enter, shut, pray and receive.

The secret of Jesus’ power was the secret place of prayer. Mark 1:35 records, “And in the morning, rising up a great while before day, he went out, and departed into a solitary place, and there prayed.” Mark 6:46: “And when he had sent them away, he departed into a mountain to pray.” “It came to pass in those days, that he went out into a mountain to pray, and continued all night in prayer to God” (Luke 6:12). That’s God, manifest in the flesh, and He knew He had to get somewhere and pray. Who are we to think that somehow we’re going to survive this experience that we’re in without prayer? We’ve got to get somewhere and pray. The world’s depending on it!

Two things happen to bring men to a secret place of prayer: a secret sin and a secret burden. To pray apart and to pray alone is one of the most valuable experiences of our walk with God. If there is no secret prayer, there can be no effective prayer. It is the life-blood of the saint.

“When you pray, go into the closet.” Retreat to prayer! Go to a place where no eyes will see you and no ears may hear you. When you shut the door on the world and kneel in private prayer, something happens in the world of the spirit: your values are adjusted. The benefits suddenly become clearer. What had been overlooked in a public place now becomes of heightened value. There’s a love for those around us. There’s an appreciation for the things we often take for granted. The value system of the world suddenly becomes so fleeting. The value system of God suddenly absorbs us, and the value of prayer, the Word of God, the blessings of the Spirit, and the place of fellowship is worth more than gold.

Perspectives are brought into a clearer focus. Fears and anxieties of life are suddenly put to rest. Small misfortunes can be seen as something that are honing our spirit into what God desires. The overwhelming disappointments no longer give power to depression. The weariness that wilts our energy loses its effect. The maddening, all-important pursuits suddenly take a back seat to God’s plan.

James Kilgore tells of pastoring his first church. It seemed that everything he tried went wrong. They had some huge problems that seemed to have no resolution. Finally after trying everything, he decided to go and find a place to pray: in the attic of the church. He climbed into the attic and started to pray. As the sun began to scorch the outside, the temperature began to climb inside. Bro. Kilgore said he prayed on and on. After three hours of praying in that hot attic he came down, his clothes literally dripping, but it was in those hours of prayer that God turned the church around on a path toward revival.

It’s extremely difficult and at best doubtful that man will be able to confess his sins in the public arena of prayer. But when we’re alone in prayer, when the door of the closet is shut, we come into His presence, close the world out and close God in, and we can tell Him anything.

There’s an old Arabic fable that tells the story of a great rock in the ocean that would literally draw ships into it. Once the ship hit this rock, it would be dashed into pieces, casting the crew and its load into the murky depths. If a man has been magnetized by a certain sin, he’ll be destroyed by it. But if that man turns himself toward prayer, he will not carry gun powder toward some rock and see sparks flying. If that man turns to prayer in the secret place, he’ll not take his precious goods toward the reefs. If that man will turn to prayer, the Lord will lead him safely through. That is the power of secret prayer.

Bro Danny St Clair serves as presiding bishop of the Pentecostals of Anderson in Anderson, IN. He also serves as the Indiana District Superintendent of the Assemblies of the Lord Jesus Christ.

A Vision: A Fresh Look 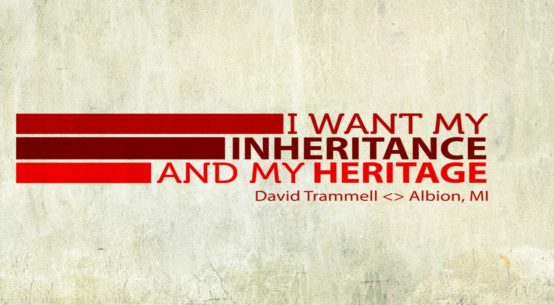