Some of the many things that define God’s character are, among other things, the vast ocean of His love, His absolute truthfulness, hatred of evil, steadfast loyalty, and a strong sense of justice. These characteristics are a direct result of His holiness. Because He is holy we can be assured that every deed and every work of God is “true and righteous altogether.”

High-ranking angels who surround God’s throne cover their faces and their feet while in His presence. They do not cry “mighty, mighty, mighty” or “awesome, awesome, awesome,” but they continually cry “holy, holy, holy is the Lord.” Isaiah heard these words and saw that they were spoken with such force and veracity that the “posts of the door” were “moved at the voice of him that cried, and the house was filled with smoke.”

The Nature of God

This adoration of the Seraphim and the words of their song strongly indicate that holiness is an intrinsic part of the nature of God. That is, it is the basis for all His other characteristics and is the most powerful component in God’s persona. It is the most prominent attribute that makes God who He is. Furthermore, because of His holiness, God made it a requirement that we separate from sin if we want a lasting relationship with Him. We are commanded to make straight paths for our feet and to follow peace with all men, and holiness, without which no man shall see the Lord. Both inward and outward holiness are intended to be the result of the salvation process in God’s people.

The absolute purity of God and His steadfast refusal to compromise that purity is similar to certain natural tendencies in humans to despise filth and vermin. Cleanliness and purity are natural characteristics of human nature (and people who are not given to cleanliness are considered inferior). People’s awareness of the danger of infection and disease is a mark of intelligence that reflects the nature of God. Thus, human revulsion for filth and uncleanness causes him to separate from it and be diligent in many areas. Man’s understanding of germs causes him to avoid uncleanness because of self-preservation. This is a reflection of God’s nature in us, and it can help us understand a little about God’s holiness and why He chose to remain separate from evil. Yet, man in his fallen state does not see the need to avoid spiritual defilement.

Fallen man is unaware of how sin adversely affects the human mind and heart. Man’s natural tendency to commit sin proves detrimental to his existence, and he is unable to extract himself from that cycle of self-destruction. Human history is littered with evidence that something is missing in the human psyche. According to the Bible, this lack is the result of refusing to be connected with God, which requires a separation from all sin.

Failure to realize the need for holiness causes much misunderstanding. Until we understand God’s holiness, His actions will be a great mystery and sometimes a stumbling block to our love for Him. However, the more we discover about God the more we can see how infinitely good He is and how His intentions and motives are always right, for they are based upon the absolute purity of His character. “Every good gift and every perfect gift is from above, and cometh down from the Father of lights, with whom is no variableness, neither shadow of turning.”

The holiness of God is the reason He refuses to have fellowship with sinful humanity, and yet it was His love that springs from His holiness that drew Him to earth to save sinful humanity. Adam’s sin made it necessary that he be expelled from God’s presence, yet the holiness of God breached that wall and man was given a plan of salvation that allowed him to have fellowship with God. The same holiness that created the wall eventually demanded that the wall be torn down. This would be similar to what the songwriter said, “Twas grace that taught my heart to fear, and grace my fears relieved.” God’s holiness both complicates our relationship with Him and then reconciles us to Him.

His Word is True Because of His Holiness

Until Satan introduced the first lie in the Garden of Eden, falsehood was a foreign idea to the Creation. The lies of Satan are not “good” and function as a malignancy in an otherwise healthy environment. They are designed to replace God’s Creation with an inferior creation and a substitute god. Satan’s desire to engineer a different creation that was based on falsehood and deceit can be seen in this fallen world that is filled with falsehood. It is therefore evident that the Luciferian revolt that affected both heaven and earth was an attempt to remake the Creation. This substitute creation was based on an attempt to make evil look good and good look evil, “that put darkness for light, and light for darkness.”

Since the order and balance of God’s Creation is the result of the ultimate Mathematician who formed the laws of nature on true mathematical equations, God would not allow His “good” universe to be compromised. He has decreed that death and destruction would be the inevitable end of every part of Satan’s rebellion. He has decreed that Satan and all who follow him will be cast into “outer darkness” and swallowed by the black hole of hell. This will take place to prevent the universe from becoming the domain of the “father” of lies. It has been subjected to the “bondage of corruption” and when it is purged, it will someday be reconciled back to its original condition and put under the dominion of the “last Adam,” the resurrected Christ. The resurrected Christ is the “firstborn” of this new Creation because He was given a new kind of “life.” This new life cannot be overcome by death, for it is in the process of swallowing death “in victory.” This new life was given to His followers’ inner man when they obeyed the plan of salvation and will be given to their outer man at the first resurrection.

From Scripture we know that the worlds were spoken into existence at the command of God. They were “framed by the word of God,” and upheld “by the word of his power.” Therefore, anything that attempts to make God’s Word untrue is a threat to that part of the creation that believes the lie. To be saved we must be begotten “with the word of truth” and be made conformable to the image of Christ. “For he spake, and it was done; he commanded, and it stood fast.”

When God Came Near

Finally, after 1,500 more years, God came nearer than anyone could imagine. He came in the “likeness of sinful flesh.” However, the “man Christ Jesus” was not sinful; He was a flawless, sinless, perfect human being and “everything about him represents God exactly.” God came as an ordinary man. Yet, this union of deity and humanity allowed God to closely interact with fallen creatures and affect corrupt and fallen mortals. The humanity of Christ was a medium that allowed God to dwell in the midst of lost humanity and in so doing, He gave a glimpse of a better way for man to live. God graciously revealed Himself to a horribly corrupt world.

“And the Word was made flesh, and dwelt among us, (and we beheld his glory, the glory as of the only begotten of the Father,) full of grace and truth.”

The Incarnation was an act of the highest order that only a divine being could design. Its eloquence and beauty demonstrated the excellent handiwork of a holy and awesome God. “God was manifest in the flesh,” and He “so loved the world, that he gave his only begotten Son,” and “though he was rich, yet for your sakes he became poor, that ye through his poverty might be rich.” It is described in lofty language in the Bible, yet that language falls far short of the full description, for even the “world itself could not contain the books that should be written.”

The Incarnation was a compassionate act of mercy and grace to reach lost humanity by a pure and holy God. The influence of that act has drastically altered the course of human history and in the end will answer every argument and stop every mouth. It will become clear to everyone that God is without rival and can be believed in every situation. Furthermore, His holiness will be more clearly seen in eternity. Every “knee” will bow and every mouth will “confess” that He is Lord. The influence of the Incarnation, and what it accomplished, will influence the Creation forever. “That in the ages to come he might show the exceeding riches of his grace in his kindness toward us through Christ Jesus.”

Bro. Mike Conn has pastored in Topeka, Kansas for 39 years. Also, he has served as District Superintendent of Kansas since 2007. 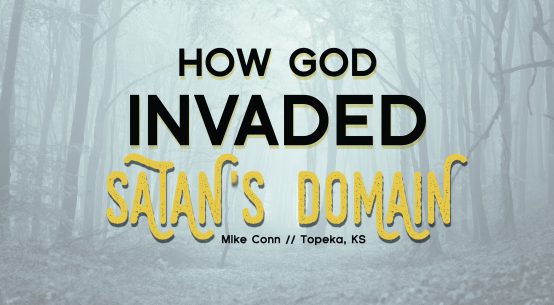