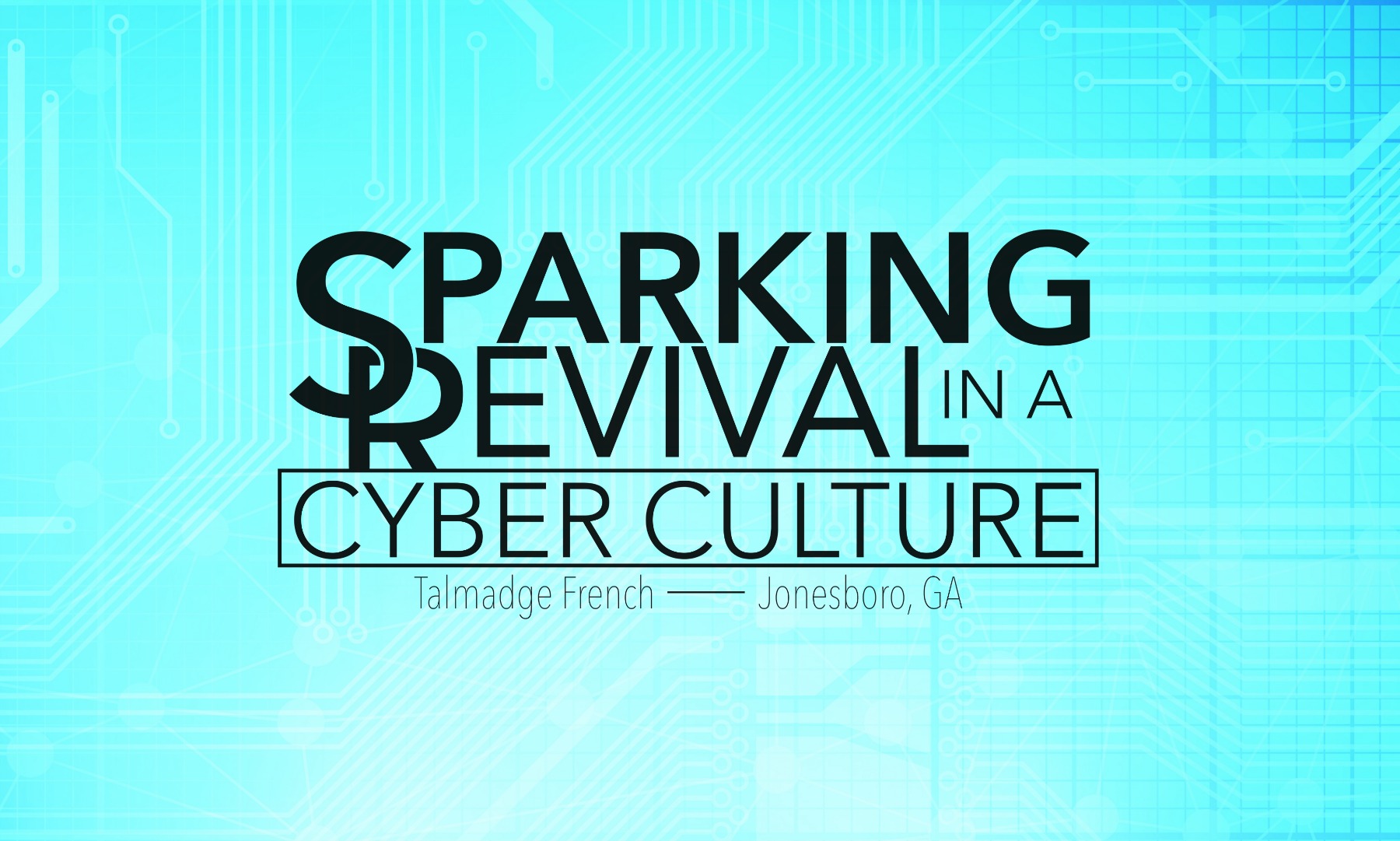 Strategically placed on a major highway that leads into the heart of Atlanta, Apostolic Tabernacle serves as a foundation of truth for a diverse culture. “Every day about a half a million people pass by our church,” stated Pastor Talmadge French. “It is almost shocking the thousands of visitors we get.” In addition, the cyber traffic generated each week from the church website and podcast is growing rapidly, already ranging to the hundreds of thousands of visitors. Bro. French, 60, and his wonderful wife, Rebecca, recognize that God is ready to do great things in Jonesboro, Ga. and are preparing for an abundant harvest. The Frenches have three sons: Ryan, assistant pastor, Jonathan, and Nathan, music director. Bro. French has served on the Illinois District Board, as well as published books including: Our God is One, his master’s thesis, and doctoral thesis, Early Interracial Oneness Pentecostalism.

“I think the real key to revival is preaching and teaching,” said Bro. French. “And when there is a focus on outreach and evangelism, folks start getting the Holy Ghost and saints get excited about that. It also helps that Atlanta has a very positive outlook toward Pentecostals.” Pastor French describes his church as a very worshipful people, giving others a sense of hope that they are about to receive what they need. They emphasize having a wide range of ethnicities and support 62 missionaries on a monthly basis. Pastor French believes keeping track of and organizing Bible studies is important. Revival must start by preaching and teaching with excitement, and people accepting and believing the message.

It is a high priority for Apostolic Tabernacle to start expanding their online ministry due to the growing number of individuals utilizing the Internet. “Our number one attraction is that we are online,” said Bro. French. “We have a website and a podcast where there are hundreds of thousands of followers. With this and a publishing ministry, people hear and they come.” The church website and podcast (www.aptabupc.com) along with Apostolic Voice (www.ryanafrench) reach into over 18 countries. This has become a fundamental part in the growth and localized awareness for their church. Visitors regularly attend from the community who have listened to the services for months before deciding to step into service. High-definition video recording is the next goal in this ministry.

Apostolic Tabernacle has 18 different areas of ministry, which includes being the head of the Georgia prison ministry, which is led by a minister in their church, Bro. Tee McGee. Everybody is trained to be an evangelist: to fast, pray, and be a part. Every few weeks they make thousands of business cards and distribute them throughout the community. “We want to make our presence known,” said Pastor French. “Even the very newest members will do that. The church is exciting and if you like it, others will like it too. I have always felt that our movement needs to emphasize that we have a great product. Get people out to see it and have something there for them. That will cause your church to grow.” Often they target children with special events throughout the year to encourage members to get their family and friends’ kids involved.

Sunday mornings before service, the department heads of all ministries meet and the coordinator for the Evangelism office gathers their reports. If there has been a Bible study or new visitor, they know about it and have it recorded. They set the entire year and organize with revival in mind in their annual planning session. The vision for 2017 is 3D: Discipleship, Dedication, and Dynamics. “I think we are reaching a point that further training is the next level. This growth happened so fast that a lot of the training tends to be on-the-job,” said Pastor French. They are launching several new ministries and initiatives this year to undergird this vision, such as altar working, baptism ministry, and Bible study training. About 36% of all members at Apostolic Tabernacle are active in ministry.

“The miraculous has to be expected,” said Pastor French. “It is part of faith in a church and as God moves, people see that God is doing it and are inspired. Our son, Ryan, had a heart condition as a baby and God touched him. Middle son, John, had cancer and God healed him.” One miracle that happened recently at Apostolic Tabernacle was the healing of former pastor, Bishop B.S. Cole, who at 87 years old fell and broke his neck and was not expected to live. He had surgery and God miraculously healed him. The church was strengthened and glorified God. Twice in the last six months, the church prayed specifically that God would talk to someone as they were driving by to come and the very next service someone would walk in and say they drove by and felt they needed to come.

One thing Apostolic Tabernacle strives to do is to reach for everyone the same. “The basis of Christian faith is that everybody, every human being, is valuable,” said Pastor French. “This includes the rich, the poor, no matter who they are ethnically. We reach for everyone the same and display that to our people. They need to see you loving people. Being available is very important, as well as putting yourself out there to meet and talk with people. Not in the office, but out in the church.” Fairly regularly, they schedule a “Meet the Pastor” day, where individuals can have a bite to eat and talk to the pastor for hours if they wish.

Defending the Bible is the subject Pastor French enjoys preaching about the most. Oneness is close behind, as he was a Trinitarian that came out of the Assemblies of God. But he loves preaching about the Bible and the power of the Word of God, which translates into dynamic worship. It is more than just giving facts about the Bible but talking about its power. “I emphasize a great deal that you have to live by the Bible, love the Bible, and obey the spirit,” said Bro. French. “If you want to know what to do, it is in the Bible. The Bible comes alive, and thousands of people that listen are affected.”

Because of Pastor French’s extensive educational background, including a B.A. in Ancient Language (Greek) from Wheaton College in Chicago, an M.A. in New Testament Theology, and a PhD from the University of Birmingham in England, the church does target intellectuals, such as university professors trying to understand the Apostolic message. He is regularly called in to meet and talk to Trinitarians about what they believe. When they hear or read his material, for the first time they understand Oneness.

Presently, Apostolic Tabernacle is housed in a 30,000 square foot building with a 500-seat auditorium. It is located on a major highway coming out of Atlanta with a large charismatic church across the street. The building had no prior uses and was built 20 years ago by Bishop B.S. Cole. It is about a $3 million building and paid for completely. All under one roof, it houses a full gym, sanctuary, 12 classrooms, a chapel, fellowship hall, and kitchen. Pastor French stated that, “We just recently purchased headsets for our new Spanish ministry and are running about 20-25. Many have gotten the Holy Ghost. It is the first really successful ethnic ministry that we have. They have their church service first with a Bible lesson in the chapel, then they join us for the main service. We advertise that and are having natural growth.” Apostolic Tabernacle’s average attendance is 235, which is a 165% growth from the last five years.

Bishop B. S. Cole started the church, which first met in four to five little buildings close by the church now. They merged with another Apostolic church in the 1990s and, in 2000, they used the property of the merged church to build the church. As pastor of Apostolic Tabernacle, Bro. French preached his first sermon on July 20, 2011 with about 85 attendees and stated that it was really a wonderful dynamic service. The early outreach methods were door knocking and Bible studies. Since then, 252 have been baptized and 267 have been filled with the Holy Ghost.

Pastor French grew up in Memphis, Ark. as a Trinitarian Pentecostal. He first received the Holy Ghost at 11 years old with no member of his family in church, except a Pentecostal grandmother that went back to the Azusa days. “The way I came into the Oneness movement was as a young college kid who asked a lot of questions. I started listening to Harvest Time radio and it peaked a lot of questions. I began to probe at why we do not do some things. I was a Latin language major at the time. Eventually, I began to look at it and became convinced that I needed to be baptized. This was before I had ever been to an Apostolic church.”

The first message Bro. French preached was on the rapture in Truman, Ark. at 17 years old. After that he knew he wanted to preach. “My pastor said that after I got baptized I should go to Bible school,” said Pastor French. “I went to ABI to learn to preach and really loved it. I knew I wasn’t Trinitarian but didn’t understand yet. I just wanted to make sure I wasn’t a heretic.” While at ABI (Apostolic Bible Institute), his ministry was greatly influenced by Bro. S. G. Norris, Bro. Robert Sabun, and Bro. N.A. Urshan.

Over the years, all of Pastor French’s family has come into the Apostolic church. He feels like the unique aspects of his youth with academic opportunities influenced his ministry greatly. “Not everybody goes and studies Greek and Hebrew when they are a kid. That affected my ministry and how I approach the Bible and ministry. Many people will probably never walk that road,” he said.

Pastor French is known to collect books and enjoys reading Francis Schaeffer works. In his free time he loves to study languages, read, and write. Because of his exciting, emotional, and intense teaching; many are surprised meeting him in person, as he is calm, quiet, and soft-spoken. His level of humility with a world-class education is refreshing and unique. Favorite preachers of his include: Wayne Huntley and Paul D. Mooney.