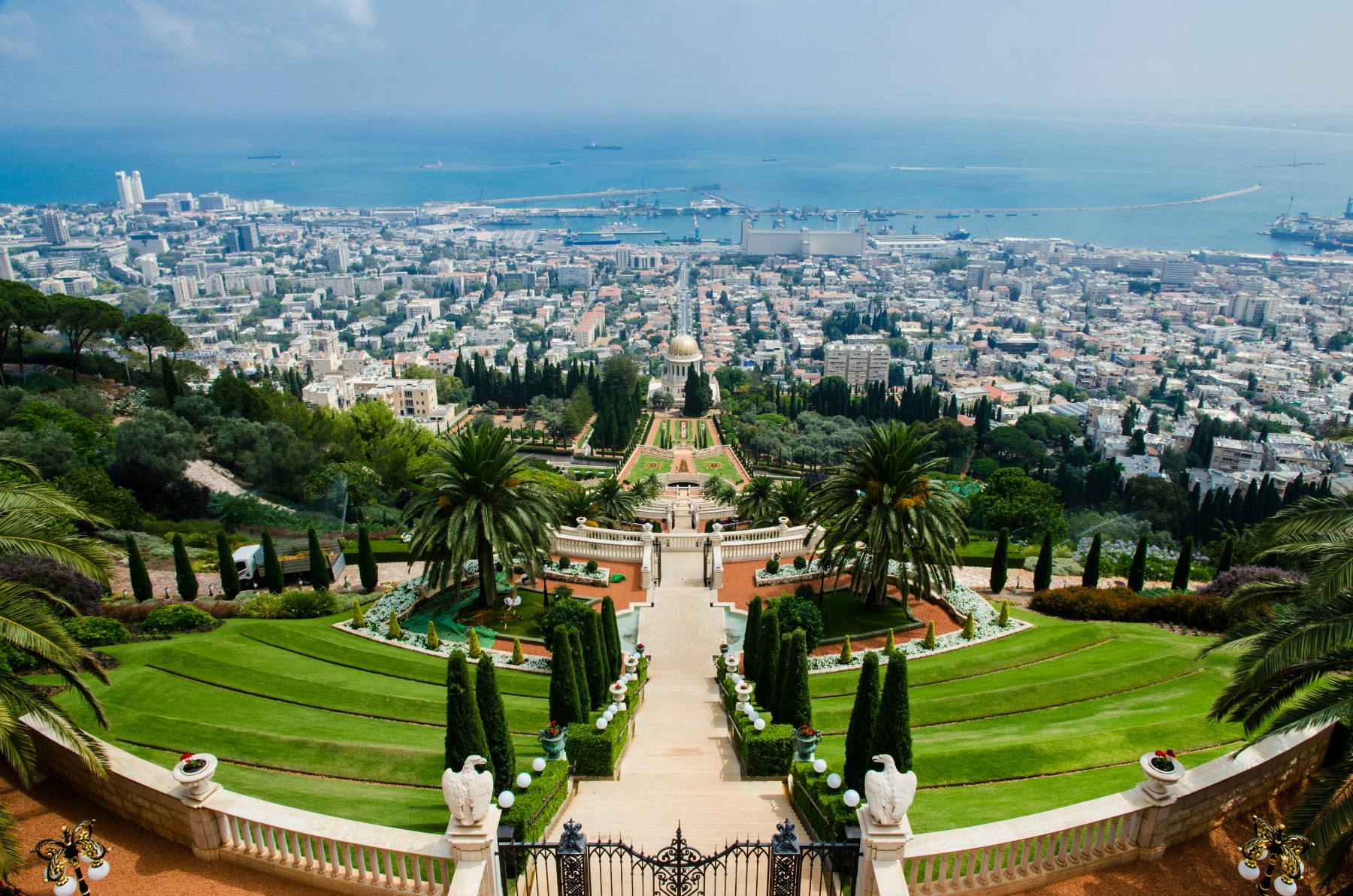 Four rabbis and a graduate of Indiana Bible College are sitting in a classroom together in Jerusalem. No, this is not the beginning of a joke. This is the continuation of a real life miracle — just another day in the life of Matt Yeater, a 2013 graduate of IBC.

Did I mention that Matt is blind? Or that within three years after finishing at IBC he earned a Master of Divinity at Anabaptist Mennonite Biblical Seminary (AMBS) in Elkhart, Indiana, where he collaborated on a nationally award-winning project of creating computer programs that can convert textbooks related to ancient Semitic languages and biblical Greek into Braille? That scholarly and technical achievement makes the study of biblical languages broadly available for the first time for blind scholars. In recognition of that work, Matt was part of a team that won the 2016 Dr. Jacob Bolotin Award of $20,000 from the National Federation of the Blind.

Last year, Matt visited with instructors at Harvard University where he has been invited to pursue a Ph.D. In the meantime, he was accepted at Bar-Ilan University in Jerusalem at the end of last year. Presently, Matt is in Israel working on another master’s degree in the study of modern Hebrew in preparation for his pursuit of a Ph.D. in Judaism and the Hebrew Bible.

It is that current scholarly endeavor that finds him these days sharing a classroom in Jerusalem with four rabbis, along with eight other students in his class who are studying to become rabbis. Matt is more than adequately staying up with his fellow Hebrew language students. Their study includes the Midrash or ancient commentary on the Hebrew scriptures. Not bad for a guy who, just a few years ago, had his first taste of Hebrew in a basic language class taught by IBC Instructor Jennifer Mast. During his master’s degree program, he began his concentrated study of biblical languages, and became proficient in reading and translating Hebrew, Aramaic and Greek. Later this summer in Elhart, Matt plans to begin his study of Latin and German, and eventually French, in order to read scholarly texts in those languages.

On that basis alone, this would be a remarkable story. What makes it truly miraculous is that Matt’s journey began in a life of drug addiction and prison time long before his life-changing encounter with Jesus Christ. He was raised in a home where both parents were bound by alcohol and drug addiction. His family followed that lifestyle from Idaho to Florida to northern Illinois. By the time he was nine years old, Matt was smoking cigarettes, by 12, marijuana. He was using methamphetamine and cocaine by the time he was 15 or 16. He was in prison from age 18 to 20 for multiple counts of burglary and theft. He was, he said, “a horrible, horrible kid. When I got locked up, I deserved it.” Soon after getting out of prison, he was back into selling illegal drugs, primarily meth. Before the year was out, he lost his eyesight when his home meth lab blew up in his face.

He was enrolled in schools for the blind but was kicked out for misbehavior. He married and had two children. By this time, he was living in Elkhart, when his life was about to go from very bad to even worse. He was taking care of his two children one evening while his wife was working. He placed his two-month-old daughter in the corner of an overstuffed living room chair, but when he attempted to sit down next to her, unable to see her, he accidentally sat on her leg, breaking it. Later, at the hospital, he was arrested for child abuse.

For months, he was in the Elkhart County Jail, awaiting trial. Because of his past criminal activity, he faced the real possibility of a 40-year prison sentence. “I never had any kind of relationship with God at all, but I just went into my cell, kneeled down by my bunk and said, ‘God, if this is not what you want to happen, don’t let it.’ That was it.” Nothing happened. In fact, the situation got worse. His attorney soon informed him that a plea bargain that would have reduced his sentence to 20 years had been withdrawn. The prosecutor’s office had determined there was no reason for leniency in Matt’s case. He became so depressed; he was determined to hang himself in his jail cell.

Then God did show up in the person of a ministry team from Life Tabernacle Church in Elkhart where Mark Johnson, Indiana District Secretary for the UPCI, is pastor. It was the first time any kind of jail ministry team had visited his cellblock, Matt said. Their only question was, “Does anybody here need to talk?” Matt did. For the first time, he no longer felt alone. More months went by as Matt awaited trial, but now he was spending his time listening to an audio Bible and attending Bible studies.

The real possibility of a 40-year jail sentence still loomed before him. “One night,” he said, “I turned my face to the wall, weeping. I was facing 40 years. ‘God, you know what happened,’” he prayed, knowing he had no intention of harming his infant daughter. “There was no one in that cell but me, but I heard clearly an audible voice say, ‘Get the medical records.’”

Matt called his wife and asked her to bring their daughter’s medical records. The records revealed that the charges did not correspond to the actual medical records. In time, his attorney was able to prove obstruction of justice and falsification of evidence. Charges were eventually dropped, and Matt was released.

“That clear, audible voice couldn’t have been anything but God,” Matt said, “and it set me free. I could look back and know, wow, God really did this for me. That really did happen. After that, it was a matter of getting out, going to church, and falling in love with the Word.”

Key people at Life Tabernacle Church took him in, and Matt soon experienced his personal Pentecost. It was not an easy road, by any means. Matt lost his wife and, for some time, custody of his children. With help and guidance from his church family and pastor, he grew in his walk with God, and in time, was accepted at Indiana Bible College, although his financial resources were far from certain. He graduated debt-free in 2013.

His pastor, Mark Johnson, agrees with Matt’s description of dwelling in the place of impossibilities. “He lives a life of faith,” he said of Matt. “He accomplishes more than most of us, in spite of his blindness.”

An Indianapolis city sidewalk near the IBC campus is testimony to that statement. When Matt arrived at IBC, there was no paved sidewalk along the block of city street from the men’s dormitory to the back gate of the campus, but Matt had managed to walk the unpaved route for over two years. One day he was confronted by a city official because of her concern for his safety on the uneven passage from the dorm to the campus. Matt was upset, since he had been making that trek for over two years without incident. He made his feelings known in the office of Rob Rodenbush, IBC’s executive vice-president.

Matt said Bro. Rodenbush told him, “If you need a sidewalk, get out and do something about it.” So he did. Matt worked directly with the governor’s office and city officials. He was the catalyst to push through a street improvement project costing several hundred thousand dollars and resulting in construction of a sidewalk along Carson Street from the entrance to the men’s dorm to the back gate of IBC.

“The drive that you saw in him,” Bro. Rodenbush said, “to never give up no matter what roadblocks or hurdles  — blindness or otherwise,” was an attribute of Matt not soon forgotten. “To not be bitter or feel self-pity was an amazing thing. He was always positive and upbeat. To me, that was always remarkable. He never used his blindness as a sympathy card. He had an amazing, positive attitude about life and spirituality.”

Besides weekly phone conversations with his pastor, Bro. Johnson, Matt stays in touch with mentors at IBC. He keeps regular contact with the Chairman of Urban Missions Studies, Jim Sleeva, and still enjoys theological discussions with the Dean of Biblical Studies, Bobby Killmon. During his years at IBC, Matt said, “Everybody helped me.  They gave me the opportunity to grow.”

Asked about his impressions of Matt’s time of study at IBC, Bro. Killmon said, “He was probably one of the most assertive students we have ever had. He was that way with truth, with knowing it and getting it for himself. He understood that Spirit and truth have to work together.” He recalled that Matt’s academic mentor in his master’s program in biblical languages told Matt, “Your story is incredible. You were nurtured by us, but now you’re studying with the leading experts in the world.” Matt is pushing ahead to obtain his second master’s degree in theology but already has his sights set on his long-term goal of earning a Ph.D. at Bar-Ilan University in Jerusalem.

One thing he has greatly appreciated about his present academic environment is that “there is more authentic, conservative, and honest (discussion) about the text and what it is actually saying.” His studies of the Hebrew Bible have been “very confirming of things that I was taught at IBC — very biblical and very conservative.”

In contrast, he said, “Israeli scholarship is very conservative, very biblically based, like their faithfulness to the Masoretic texts. Liturgically, it’s been the same for 3,000-plus years. They have other texts that are Aramaic that are separate texts, but they don’t use them liturgically. Even after the exile, there were some who went one way and others who went another, but when they came back together, it was the same text. They’ve been holding on to the Torah for 3,000 years. They have a huge respect for the Word of God. They hold it as sacred. If they didn’t change it, neither should we.”