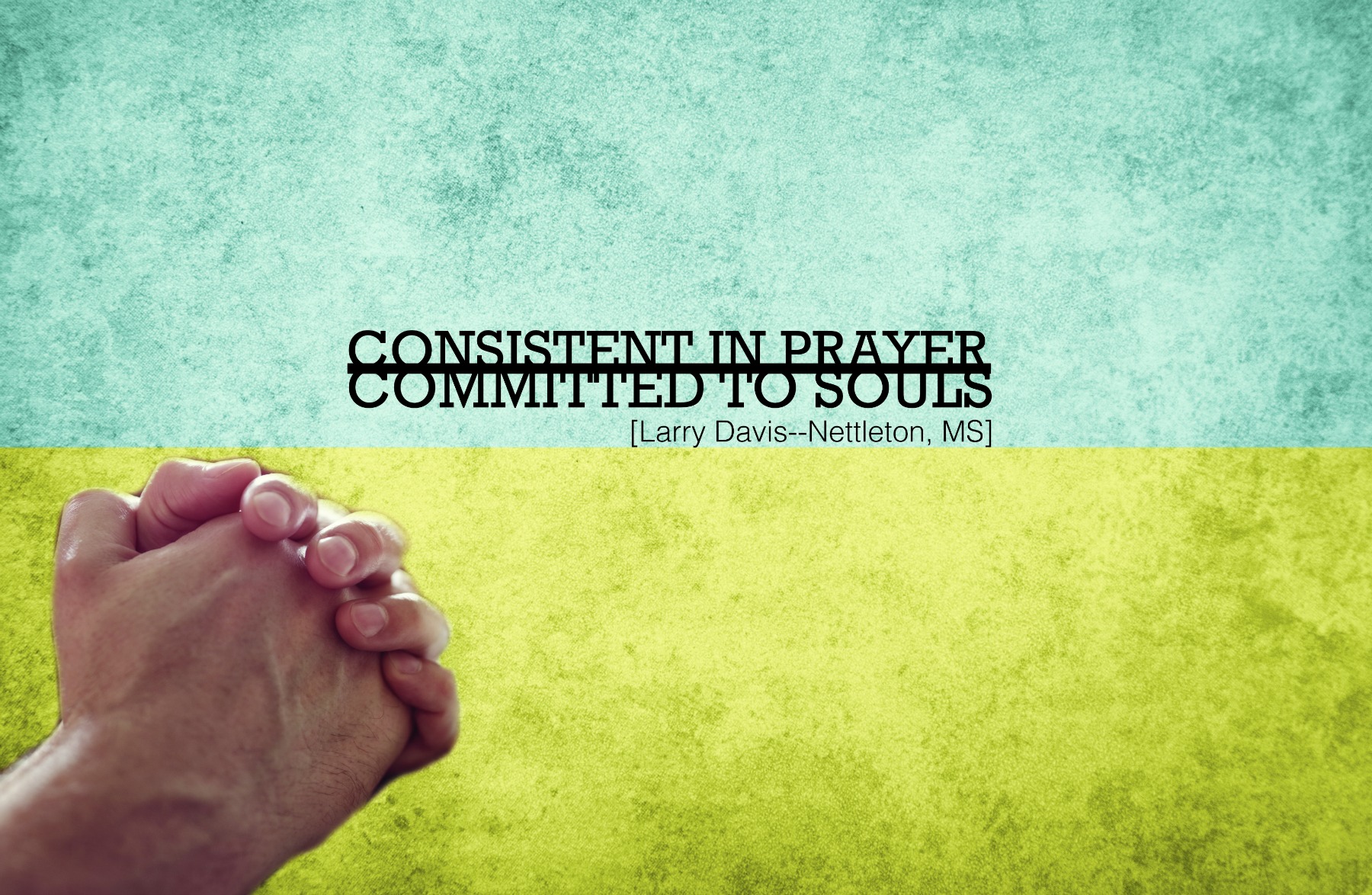 The most important key to having a growing church is “consistency of prayer life,” said Senior Pastor Larry Davis of Nettleton Pentecostal Church, the oldest active Pentecostal church in the UPC, located in Lee County in the city of Nettleton, Mississippi. “I preach to our people all the time about having a burden for souls and their families, basically the Great Commission.

“Priority number one is that it’s a church and number two is that it’s a family. Neither one of them can be neglected. Of course, a pastor must put priority on his own prayer life. I’ve seen a lot of people who try to work for God and win people, but if they don’t have a consistency in their prayer lives, it just falls apart for them.”

Pastor Davis said, “We have a very active Youth Ministry and regular visitation where we knock on doors. We teach home Bible studies and run a large bus ministry on Wednesday nights for our children’s ministries. Sometimes, we bring in as many as 100 kids. It’s not without difficulty when you get all the kids together.”

Nettleton Pentecostal Church also has a very active Ladies Ministry, Youth Department, Puppet Ministry and Children’s Ministry, besides a thriving Sunday school. Their Men’s Ministry has been active for over 50 years.

“We try to have one-on-one meetings with our department leaders, sometimes every week,” Pastor Davis explained. “Quarterly, my son, who is our associate pastor, meets with the leaders of the Sunday school, youth, and children’s ministries. We don’t have any written monthly reports, just word of mouth. A lot of times we’ll talk every week.

“We have a yearly planning meeting with all of our leaders at the beginning of each year. We plan our calendar out, and then we have another meeting around April with our department heads. We have big fundraisers that we do every year in April. All of our departments are active with that. We have a church-wide meeting concerning our big festival. That helps us in our building program.”

For further instruction of their leaders, “We have training in our Sunday school yearly meeting. Sometimes, we will have sectional meetings that we encourage our teachers and department heads to attend. I teach a lot from the pulpit concerning Sunday school, evangelism and soul winning.”

Pastor Davis’ philosophy of ministry is a deep love for souls. “You’ve got to have a love for souls,” he said. “Ministry is more than a job; it’s a calling. Every preacher should dedicate himself not just to living for God but to the love of others. The Lord said, ‘By this shall all men know ye are my disciples, if ye have love one to another.’ You’ve got to love people regardless of what they look like or how much education they have. It doesn’t matter whether they’re rich or poor, you’ve got to have love for them. Sometimes, you have to get your hands dirty. As the Scripture says, ‘… pulling them out of the fire; hating even the garment spotted by the flesh.’ So, it’s that love that you’ve got to have for people.

“I love preaching on the Godhead, the plan of salvation, and the power that God gives us. I guess my favorite Scripture on that would be Ephesians 3:20: ‘Now unto him that is able to do exceeding ab

undantly above all that we could ask or think, according to the power that worketh in us.’ We’ve got the power; we’ve just got to use it.”

The focus of Pastor Davis’ ministry includes a large black community. “We go quite a bit and bus those children in,” he said. “A lot of them don’t have a stable family environment. For some of them, their mother and father don’t live together. Some of them live with their aunt, uncle or a grandmother. We try to win everybody. We focus on the entire community, but we do bring in a lot of those children.”

Pastor Davis said he would love to have “at least 10 percent growth a year, not money tithes but people tithes. Our town is not very large. We have about 1,800 to 2,000 people. My desire is to keep 10 percent of the population in our church. So far this year in January, we’ve got about three new

members. I’m shooting for a higher goal, but that’s great for a small community. Last year, I think our Children’s Ministry baptized about 35.”

The average attendance for Nettleton Pentecostal Church is “probably around 150, counting our extensions. Last year we went from 135 to 160. It varied each Sunday. We have Sunday school on a Wednesday night. We count the Children’s Ministry and various preaching points, so now it’s probably 160-175.”

“One man had a brain tumor that already had paralyzed his legs,” explained Pastor Davis. “Now, through the help of God directing the doctors, there’s no more growth of the tumor and he’s very energetic in soul winning.

“One of our ladies was driving down the highway and a car veered into her lane. She testified that the only thing she had time to do was call upon the name of Jesus and the other car passed through her car without touching it. She looked out the mirror and saw the tail lights going the other way! That seems farfetched but not for God.”

Having been raised in church, the Pentecostal faith is all that Pastor Davis has known or believed. “My grandmother prophesied over me when I was two years old that I would be a minister and an artist,” he said. “All that came to pass. I’m an accomplished pianist. I preached my first message in the second grade. I got the Holy Ghost when I was 12 years old and accepted my calling.”

He attended Bible school in Texas, received his license at 15 and ordination at 17 with the Assemblies of the Lord Jesus Christ. A few years later, he was licensed and ordained with the UPC.

“I became assistant pastor when I was about 26 here in Nettleton and I’ve been here ever since. I was helping my father-in-law. When he started to retire, I became the pastor, and he became the senior pastor. I’ve been in Nettleton for 46 years.”

According to Pastor Davis, the Pentecostal movement in the Lee County area began in the summer of 1917 when Bro. E.L. Partee from Pontotoc County invited Bro. J.R. Higginbotham from Arkansas for a revival meeting. “The Pontotoc people who had embraced the Pentecostal faith came to Lee County to attend the funeral of Mr. J.R. Montgomery in the Union Community, and while there held a prayer meeting,” he said. “This prayer meeting was the source of the organized Pentecostal Church in Lee County and eventually at Nettleton. The believers moved from the Union Community and began services in the Eureka Community, east of Nettleton. In January of 1937, the land on Maple Street was leased for 20 years and the first church building, a frame structure, was constructed. In August of 1937, the church building burned, apparently from arson.

“Construction of a new church building began immediately. The new church was constructed with living quarters in back, and someone resided in the building for a number of years to prevent another church arson. In 1949, the church members purchased the plot of land they had leased, and in the 1950s, the brick church building was constructed. In 1960, a large educational annex was built. Ten years later, another annex was constructed to house additional classrooms, a baptistry, dressing rooms and an enlarged choir loft. In 1978, the sanctuary was renovated to add a balcony and a 30-foot addition to the front was added to enlarge the auditorium, add restrooms, and a large foyer. Additional Sunday school classes were added on each side. (http://www.superpages.com/bp/nettleton-ms/nettleton-pentecostal-church-L0009037541.htm).

“In 1999, a new auditorium and Family Center was built. This August, our church is going to celebrate 100 years. As far as we know, it’s the oldest active Pentecostal church in the UPC.”

Pastor Davis said one of the most important keys to a successful ministry is to keep your personal prayer life active. “If you’re not dedicated yourself, you can’t preach or teach others to be dedicated,” he said. “God comes first in our lives. The best philosophy to use is what Jesus said, ‘But seek ye first the kingdom of God, and his righteousness; and all these things shall be added unto you.’ We as humans want fine things, nice houses and good cars, but if you’ll put God first, the Lord will help that come to pass for you.”