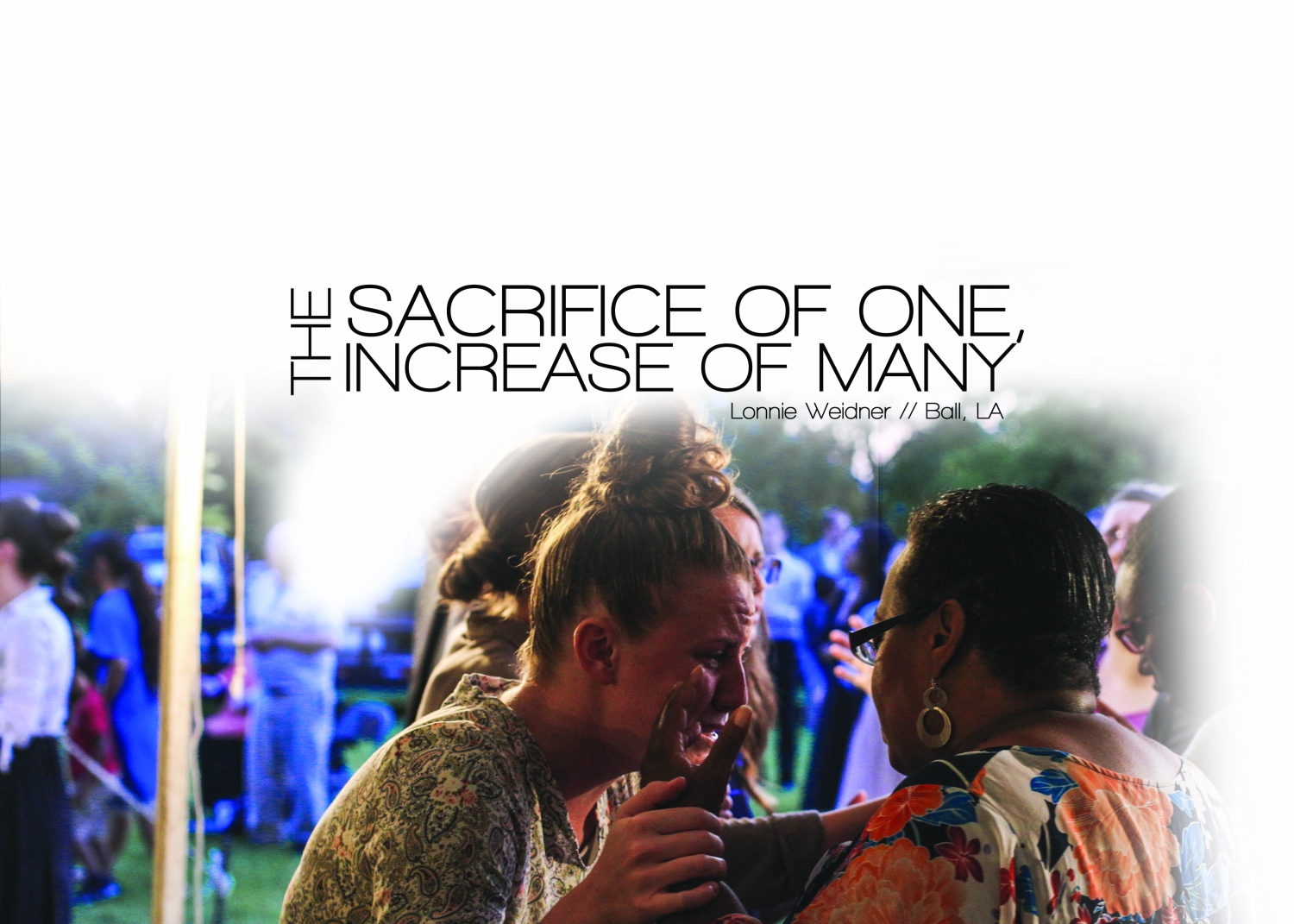 Seventy years ago, there was a piece of property on Livingston Road in Ball, La. It was near a World War II base camp that often housed up to 30,000 troops at any given time. The owner of this property was a gentleman of the Malone family who had determined to cut himself some timber to build a home. However, after cutting the timber, he began noticing the great number of men passing his property from the camp. Filled with compassion for them, he sacrificially said that he would rather build a chapel for them than have a home for himself. This chapel was built and used for over 50 years to preach the gospel of Jesus Christ. Today, you can find this church has grown and moved to a new location in Ball, Louisiana where Lonnie Weidner Jr. (50) and his wonderful wife, Jeana, pastor the Church of Pentecost. Pastor Weidner served five years as Sunday School Secretary for the state of Louisiana. He and his wife have three children: Brenton, Clark and Mason. During their time in Ball, they have seen a great increase and are preparing for an even greater harvest.

“In the last year we have really started moving toward the small group activities,” said Pastor Weidner. “First, we want to have a powerful Sunday morning worship service. And second, our desire is to connect new people to the church.” To keep the cohesion, this past year the Church of Pentecost launched seven basic groups: men, women, youth, prayer, addiction recovery, marriage and outreach. One of their greatest methods for growth and increasing attendance is guest follow-up. Working in both the church and in the business field until 37, Pastor Weidner states that they have followed a business model in some ways. For example, they strive to have office hours or time where they can just be in the office and stay focused and structured, not including important time spent in prayer and study.

Some of the ministries of the Church of Pentecost include Kingdom Kids and Blast for children, 24/7 for student ministry, Hyphen for college students, Younity for young marrieds, and a 50+ group. All ministries fall into three categories: creative, discipleship and outreach. Each department has a leader and a team that meets once a month for a couple of hours on Sunday with Pastor Weidner. Weekly, there are two emails sent out to these leaders and teams with a brief outlook of the next week’s events and programs. In addition to the Sunday monthly meetings, Pastor Weidner often meets with his ministry leader and outreach leader during the week to do more dreaming and talking about the future. Pastor Weidner states, “Tuesday is usually a long day for us, spending at least half of the morning in the office just really talking about how things are going and getting ideas in place to pass on to the other leaders.”

One particular ministry that is taking off at the moment is their homeless ministry. This started with one young lady who got connected to the homeless by making sandwiches and feeding them. She eventually gained their trust, and they allowed her to see another side of the homeless life. Now she is with them continually, seven days a week in touch with them and helping them get their needs taken care of. Pastor Weidner states, “It simply started organically with just one young lady getting personally involved and developing a burden.” This personal ministry has been taken under the umbrella of the church and many have come, received the Holy Ghost and been healed.

The Church of Pentecost has had many miracles take place throughout the years. A lady with an aggressive brain cancer did some treatment and came very near death but recovered miraculously. A year later she is in full remission and recovery and even some other health issues she had have disappeared. More recently, during a service with an evangelist, a homeless man who had not had feeling in his hands for years was prayed for, and the feeling returned completely.

Pastor Weidner was raised and spent 25 years at the Pentecostals of Alexandria (POA) before moving to Ball and has spent the last 25 years there. He recognizes that stability has been key to get them really planted in their area. As a preacher, Pastor Weidner has a heart for encouragement and families. He states, “People have such a heaviness with drug addiction and families torn about, and I can relate to that coming from a divorce home. It is important to keep families connected.”

Pastor Weidner has always strived to have a personal Bible study going on. He states, “I have found that while I enjoy my pulpit ministry, many times it is the one-on-one evangelism where change happens.” In this, he shows the importance of getting down to a more personal level of building a relationship to really establish new converts.

It was the early ‘90s when the Church of Pentecost began to look for a new place to build. The story goes that then-pastor Bro. Wheatly was driving and passed a piece of property. His wife said, “One day we will have a church here.” To which he replied, “I hope you have a lot of money.” She responded, “I know who does.” Shortly after, she passed away, and money that had been set aside for possible treatment became the down payment on the property she had claimed.

The current facility for the Church of Pentecost was built on this property and in 1999 they moved from the Malone Chapel into it. It is a 10,000 square foot metal building, with a few brick columns, that seats 280. At one end there is a fellowship hall and at the other end is a sanctuary. As they have continued to grow, they expanded their Sunday school and youth departments to three additional buildings.

For future growth plans they talked about several things. One idea they attempted but did not find success in was having multiple services. Currently, they are looking at the possibility of expanding and building with a vision of a 500-seat auditorium. They still have two and a half acres of land that are untouched and, with their growth of 5% per year, they will soon need it. Their current attendance is at around 240 with 60 already having received the Holy Ghost this year.

Nurtured up under both elder and younger Pastor Mangun at Pentecostals of Alexandria, Pastor Weidner received the Holy Ghost at 12 years old on September of 1979 at a children’s revival. His grandfather was the district secretary of Louisiana for 23 years and his grandmother, Clara Clark, was a soul winner for POA. Pastor Weidner states, “I definitely grew up in a ministerial- based home. Church was our thing and any extracurricular activities also revolved around the church.” Pastor Weidner graduated from a local high school and took some college hours before working in the business field and getting married at the young age of 19.

He first felt called into the ministry when his Grandfather Weidner passed away and states, “Bro. James Kilgore said some words to me at the funeral that started a fire inside me that I never forgot.” He began his ministry by teaching Sunday school and preached his first message at the age of 16 in a youth service at POA. When he and his wife moved from Alexandria to Ball, they became the youth leaders and everything organically grew from there until June of 2010 when he became the senior pastor of the Church of Pentecost. Those who have impacted his ministry the most are G.A. and Anthony Mangun, Lara Clark, and J. Roy and Opal Reever.

The Church of Pentecost originally opened as the Malone Chapel on September 14, 1941 with Ellis and Armor Malone as the early pioneers. Pastor Weidner describes the first sanctuary as “a two-story wood building, creaky and unlevel. Later a nice brick building was built in front of the Malone Chapel. You had to be careful with running the aisles because of the design of the bricks that jutted out at the sides of the aisles.” The chapel fit about 150 people and had a total of six classrooms. Their first leader was Betty Malone in 1942, followed by Milton Roberts in 1946, Louis Dunn in 1950, R.W. Coody in 1954, Bruce Owens in 1973, Wayne Law in 1976, then finally Carl Wheatly in 1980.

Pastor Weidner reflects that his first service was very different from his former church when he first visited in March of 1992. It seemed like a smaller and quieter world, especially to transition from 1,500 people to 100 people. Regarding their focus in ministry being at the Church of Pentecost, he states, “In the early years, our outreach was as a young family to attract other young couples similar to us. The church had reached an older age without many young couples, but soon our married class became a big attraction and we grew.”

In his free time, Pastor Weidner enjoys golfing and fishing. Having recently bought an RV to go camping, Pastor Weidner states, “My wife and I have gotten to that season in life that just sitting at a lake beside the RV sounds real good.” Fondly, he reminisces how their three boys have kept him very active through the years playing basketball on the goal in the driveway and snow skiing. His favorite preacher is Anthony Mangun and his favorite authors include John Bevere, Tom Rainer, David Bernard and John Maxwell. He and his wife have a two and a half pound poodle named Daisy who Pastor Weidner states is his wife’s dog, as she merely tolerates him and the rest of the guys.