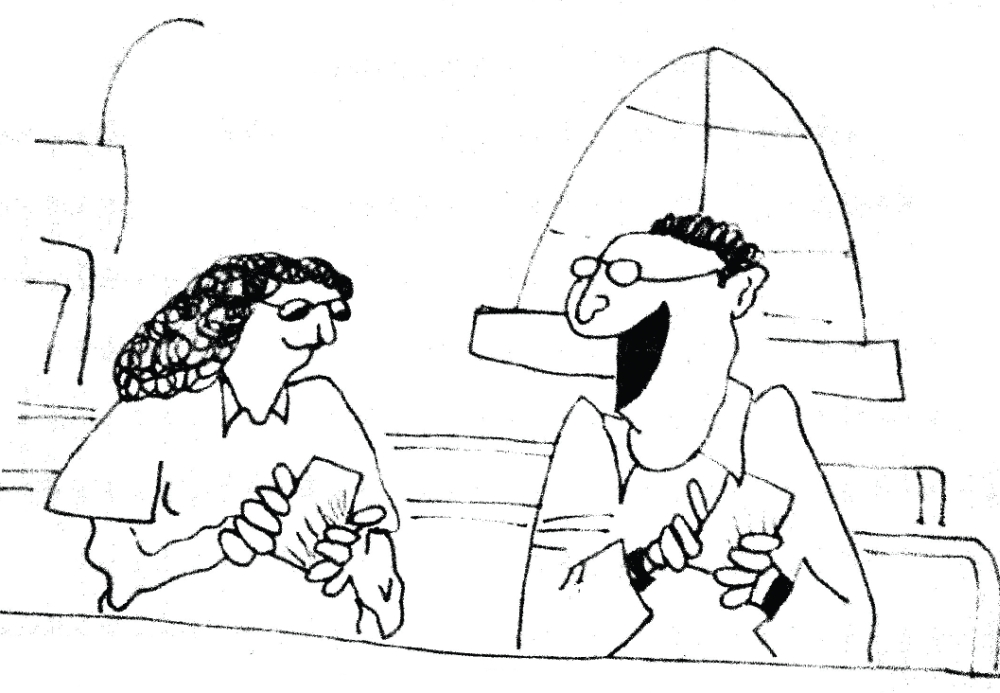 “If all your problems are behind you, you might be a school bus driver.”

2016: I will develop a realistic attitude about my weight.

It had been snowing in Iowa for hours when an announcement came over the university’s intercom: “Will the students who are parked on University Drive please move their cars so that we may begin plowing?”

Twenty minutes later there was another announcement: “Will the twelve hundred students who went to move 26 cars please return to class?”

“Pastor keeps talking about his ‘text.’ But for some reason I can’t find it in my text messages!”

Last Christmas, Grandpa was feeling his age and found that shopping for Christmas gifts had become too difficult. So he decided to send checks to everyone instead.

In each card he wrote, “Buy your own present!” and mailed them early.

He enjoyed the usual flurry of holiday festivities, and it was only after the holiday that he noticed that he had received very few cards in return.

Puzzled over this, he went into his study, intending to write a couple of his relatives and ask what had happened. It was then, as he cleared off his cluttered desk, that he got his answer. Under a stack of papers, he was horrified to find the gift checks that he had forgotten to enclose with the cards.

A guy goes into a fancy restaurant wearing a shirt open at the collar, but the maître d’ tells him he needs a necktie to get in.

The guy doesn’t have a necktie handy, so he goes out to his car and gets his jumper cables. He ties these around his neck, manages to fashion a fairly acceptable-looking knot, and lets the ends dangle free.

He goes back to the restaurant. The maître d’ looks him up and down and then says, “Well, okay, I guess you can come in. Just don’t start anything.”

“Yes, I did help out in the nursery today. How did you know?”

Thoughts For The Day…

“Just think, Mom. If I hadn’t put my marbles in the dryer, you wouldn’t have gotten a chance to witness to the repairman.”

News You Can Use – Outreach Programs