In this book of Proverbs, Solomon writes, for all of mankind to learn from all so many virtues such as graciousness and honor that have been valued throughout the ages of man. Sadly, we are seeing other things take the place of these virtues that has held society together like glue for so long. People today they don’t want to be virtuous. Many people today don’t want to be gracious and many people today have lost sight of what honor is all about If graciousness and honor are not lifted up within our society today they’re going to be thrown aside and we will be less of a people.

A.W. Tozer said ‘even Christians have fallen into the habit of accepting the noisiest and most notorious among us as the best and the brightest. If seeking approval and popularity and money is your thing, then you’ll want to follow somebody like the Kardashians. But I doubt you’ve seen much virtue in the Kardashians. We’ve all been upset because of of the things that have been spoken of by many of the people that ran for president of the United States. We’ve seen in many of them how the media has just pointed out so many things about them.

A gracious woman retaineth honor. Graciousness is defined as showing kindness, courtesy full of compassion, being merciful. God lifts up women many times The church doesn’t put women down, the church elevates women. The Bible elevates women to a place of honor and respect and esteem.The Bible says women are keepers or retainers of honor. Honor from the latin means the evaluation of a person’s trustworthiness, the individual’s integrity. Their character, the quality of honor signifies that they have done something or they are someone that is worthy of distinction and respect. An honorable person is someone that we all want to strive to be. We want there to be much honor in our world today, we want people to be lifted up and encouraged for being honorable. We want to look at people and say “there is someone whose life is worth modeling.” Their example is of honor and it is being lost in some segments of society because there is so much anti-honor that is being given.

Women you have a God calling. You are called of God to retain honor in our families, our communities, our nation, and our world. This woman that Solomon is writing of has not one in particular, but it’s a characteristic of all god-fearing women. This woman understands where her true strength comes from. She doesn’t have the pump iron to have influence, she doesn’t have to kickbox to have influence. She knows where her strength comes from. This woman understands honor therefore she’s gracious. This woman though she understands honor and because she has understood honor, she acts honorably. She expresses herself graciously, she’s kind, she’s considerate, she’s courteous, she’s full of compassion, she’s full of mercy. The day that we start looking at those things as being weak is the day we go down further as a society. The day we start minimizing compassion, mercy, courteousness and kindness is a day that we’ve lost what it means to be human kind made in the image of God. It takes a strong person to be full of compassion, it takes a strong person to be merciful, it takes a strong person to be forgiving. She understands honor therefore she’s gracious, and she’s honored for her graciousness. I’ll show you a woman that’s dishonorable. An ungracious woman is a dishonorable woman. You can’t trust her, don’t depend upon her, don’t go into business with her, don’t marry her. Men stay away from an ungracious woman. With honor she gains true influence.

Solomon says he’s enamored with this quality. He sees this awesome strength within her. A gracious woman retain authorities others have lost honor others have demeaned on her others have thrown it away. Here she is a gracious woman she has true influence she’s honored for her graciousness she teaches honor through her graciousness and she doesn’t lay aside graciousness once honor is retained. Have you ever noticed how some people change when certain things happen in their life? How some men or women change once they get a promotion or they change once they reach a certain age? They changed, graciousness to them was nothing but a tool to move up the ladder. Her public honor will be in direct proportion to her private graciousness. There’s a lot of people that will publicly put on a certain face, but privately there’s something different altogether. A woman that is appreciated for all the right reasons, that person is the same kind of person at home. They don’t take a mask off when they get through the doors of their home. Solomon said there’s this perfect balance- this equilibrium. The public honor is in direct proportion to their private graciousness.

Solomon saw of a gracious woman, it wasn’t his mother, but it was a wife of his father by the name of Abigail. Abigail was married to a man named Nabal and in 1 Samuel 25. David and his fighting men are living out under the stars for a time. Saul is still King. David is anointed to be the next king of Israel, but for the time being he’s having to be away from the palace and away from the city. As he is in the land of Carmel, David had his men continually encounter these bandits. The bandits were wanting to rob Nabal, who was a very wealthy man, but David didn’t want to see this kind of activity going on in the Land of Israel. David would fight them off. He protected Nabal even though he had really little respect for David. David and his men were low on supplies. David said “we’ve been protecting Nabal here for a long time, and we are serving his servants. I wonder if maybe if I just sent some of my men to Nabal and said ‘neighbor, this is the harvest time and we know we know that you are sharing your sheep and would you bring to us some sheep?’” In 1 Samuel 25:10-11 Nabal said “Who is this David, why should I be concerned about him? Why should I owe him anything?” The servants of Nabal went running to Abigail, she began to realize how horrible this situation was, but she begins to gather: flowers, breads, foods, and a whole pack full of donkeys. She begins to take that train of goods to David as fast as she could. David is ready to declare war against Nabal. She throws herself before this man that’s anointed king and she begins to speak very quietly, but very passionately to him. She intervenes and apologizes. She presents all this food to keep David from doing what would have been sinful. It wouldn’t have been God’s will for David to go charging into Nabal’s land and just kill him by the edge of the sword. It was the words of Abigail that melted the heart of David.

Pastor Cox (43) and his wife, Alyssa Cox, pastor at the First Apostolic Church in Steger. FAC has been established in the Chicago suburbs for 63 years. Together they have 4 children, Camden (14), Cadence (13), Carigan (11), and Caelson (7). They currently are the Section 10 NAM District Directors of Illinois and served as the Illinois Youth President and Youth Secre 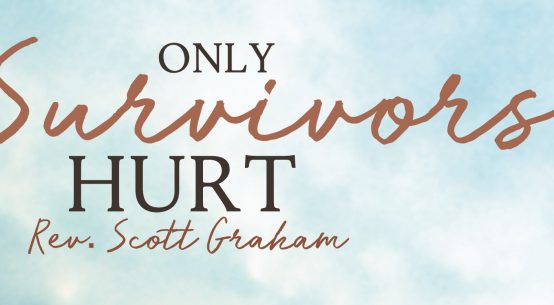 Only Survivors Hurt by Scott Graham