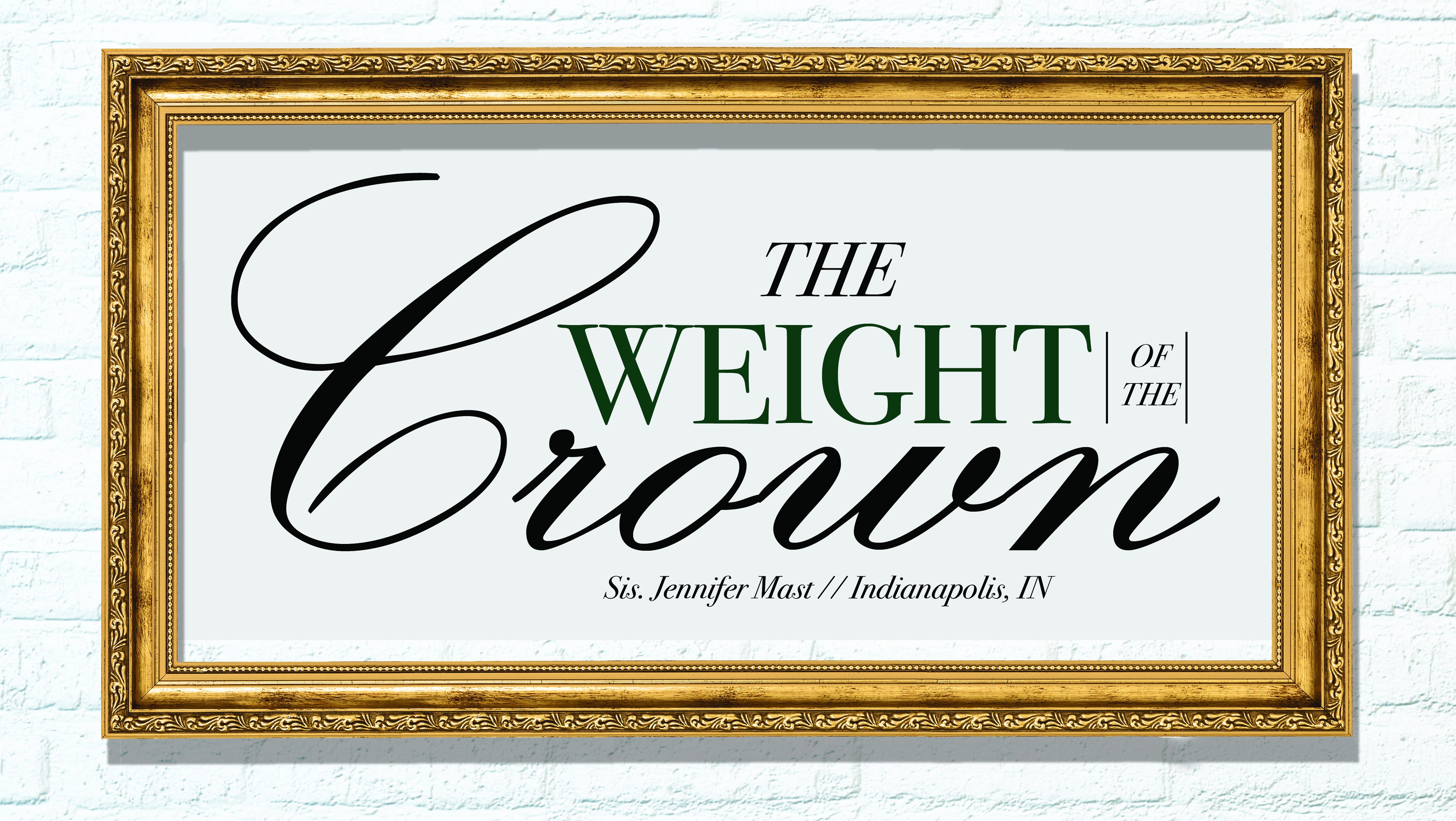 I Samuel 15:24-30 reveals a desperate Saul taking hold of the mantle of the prophet Samuel after he failed to kill the Amalekites and their livestock as God commanded. The verses depict the tragic severing of Saul from his calling and his God. The door shuts with a finality that reverberates through time. As the drama unfolds, it is apparent that Saul is so concerned with the approval of the crowd and his appearance as “the anointed one” that he fails to recognize the severity of what has taken place.

He pleads with Samuel to honor him before the people and offer up a sacrifice, so he appears upright in the eyes of the people. He is unaware he has signed the death certificate on his calling, and the kingship won’t be passed to his children. His action destroyed his relationship with his spiritual leadership and his God. As I read the Biblical account, I want to beg Saul to grab ahold of the man of God for another reason. Saul, you’ve made a major mistake; you’ve got to repent and make this right, because after this point there is no turning back.

The story of Saul causes a conflict of emotions. We often see him as the penultimate villain with the javelin ready to kill the hero, David. But, if we deny that elements of Saul’s personality reside in each of us, we do the story a disservice. Furthermore, it’s difficult to find God’s justice in the story. Was Saul merely a casualty caught in the crossfire of a rebellious people and a vengeful God? Why did God in His foreknowledge know the mistakes he would make, yet still put him into power? The heart of the story beckons us to take a closer look at Saul’s ascent into power and his subsequent descent.

The Man of the Hour

The people of Israel had rejected their God and His theocracy. God didn’t need Saul’s kingship to prove that no man could replace Him as king. To argue that Saul’s failure to effectively lead was due to an insurmountable moral deficiency is to suggest

God was incapable of preparing Saul for the task. But I believe the same God who called David, called Saul. God planned to equip Saul to become the man of the hour.

God tells His prophet in I Samuel 9:16 that he is supposed to “anoint a man…to save my people from the Philistines.” We see Saul as a man full of promise and potential. In verse two, the Bible describes him as a “choice young man…goodly…there was no young man goodlier.” He was tall and strong, a man who could take command.

We know that he responded initially with humility. “…Am I not a Benjamite of the smallest of my tribe?” Why would you call me? I’m nothing. We read that Saul prophesied with the prophets. The Bible says he was literally turned into another man.

Saul had everything he needed to become a king like David and to defeat the Philistines. In I Samuel 10:24, the people cry out, “God save the king.” Saul had the heart of the people, was approved by God, was humble and had the assurance and affirmation of the prophet. The anointing oil had been poured over his head. What more did you need, Saul?

Saul went from mountaintop to valley low within the blink of an eye. He went from winning battles for the Lord to positioning himself against Samuel and becoming the enemy of God. We see him commissioned to kill the Philistines but instead he is comfortable sitting on his empty throne, and he sends a young man out to do a king’s work. He chooses to set himself apart from the will and calling of God. His God-approved kingship is over in less than five chapters. His path chosen, his legacy set in stone.

To label this tragedy God’s design or a moral failure is to deny that Saul may reside in you and me. In I Samuel 10:9-23, Saul goes from prophesying with the prophets to hiding from God’s prophet. Did humility cause him to take cover “among the stuff” or could it be that for Saul it was just a small step from his place of hiding to his position on a tyrant’s throne? We must examine our own hearts, if Saul is to be expelled.

Perhaps Saul was not able to fight God’s enemies because he could not conquer the enemy within his own soul. Was he afraid he couldn’t measure up? Was he unwilling to yield himself to the only One able to move on his behalf? Would he be a man of God? Or would he merely occupy an empty throne, powerless to accomplish the will of God?

Ultimately, Saul’s view of God determined the trajectory of his reign. His definition of kingship didn’t extend beyond the golden crown that encircled his head; he thought the weight of the crown was his alone to bear. He took responsibility for maintaining the allegiance of the people, fought to defend his own authority, and sought to overcome his imperfections on his own. In the end, if he couldn’t convince himself of the reality of his calling, how could he convince the people, how could he convince God? His inability to come to terms with the reality that God had called him to be a king ensured he would forever hide from the call, and a king in hiding will always be either a tyrant or a timid, ineffective leader.

In ministry, when you try to bear the weight of the crown alone, you, like Saul, will imagine enemies at every turn and the calling will become yours, not God’s. You may minister, but you’ll be wholly ineffective. You may preach, but you will have no power in the pulpit. You may sing the solo, but you will not have the anointing. Like Saul, you are incapable of measuring up on your own. You cannot simply put on a garment of ministry and become what He’s called you to be.

Ministry is not a ticket to wield authority but a commitment to service and humility. It is a journey, not a destination. His call is life-transforming. Sometimes ministry requires you lay your all on the altar without any assurance He is going to breathe life into you again. It is suffering death before partaking in the glory of the resurrection. Moving forward in ministry is not as easy as just answering the call or feeling the anointing oil on your head. It is deciding to never turn back, and determining that there are battles worth fighting, and hills worth dying on. God does not promise ease in ministry. You cannot hold the crown on your own. If God has called you, He will equip you, but you must be willing to not only give Him your best but also your worst.

The Crown of the Anointing Oil

The anointing is the overflow of your relationship with God; it isn’t a spigot you turn on and off. Once you have felt His anointing oil, you are forever transformed. It is impossible to wipe away its marks on the soul.

Saul walked away from God, but the memory of the anointing oil being poured over his head drove him to search for Samuel with the witch of Endor. If you walk away from God, you will always seek a substitute for the anointing experienced in the presence of the King of Kings.

The God who anoints you wants all the broken pieces, the hidden pain, the perfectionist tendencies that seek to destroy, the personality quirks, and feelings of inadequacy.

He wants the pride you seek to hide and the feelings of worthlessness you fight to silence in the dead of night. He desires the mask of perfection that hides the cracks in your façade and the weighted crown you wear that bows your shoulders, driving you to the ground. He doesn’t just want your all; He demands it.

Give Him Your Best and Your Worst

You can’t make yourself good enough for God. He isn’t afraid of your struggles and weaknesses; He knows your heart completely. The only way you’ll escape the comforting shadow of your own weakness is if you recognize living victory to victory is just as dangerous as defeat. You cannot understand the power of a Healer until you have presented Him with your deepest pain. In fact, sometimes you have to grip the ragged edge of pain and allow your heart to bleed at the foot of Calvary, so that His blood can bring healing. Furthermore, you cannot trust God with your future if you do not trust Him with your past and present. You cannot understand the strength of God until you are willing to present your greatest weakness.

Saul was unwilling to give his insecurities and imperfections to God. The young man who hid behind the stuff, afraid to surrender, tried to survive and become king on his own terms. However, he wasn’t strong enough to wrestle with the weight of an earthly crown and because he never allowed God to define his worth and shape his character, he failed to be the king God anointed him to be.

God desires a relationship with you, and His anointing demands you come to Him in transparency and complete surrender. If you are willing to give Him your best and your worst, He can transform the weakness and pain you desire to keep hidden into your greatest strengths. He does not want you to wrestle with His call on your own; He will equip you. When you yield yourself to Him, He can repair all that is broken, and He will bear the weight of the crown.