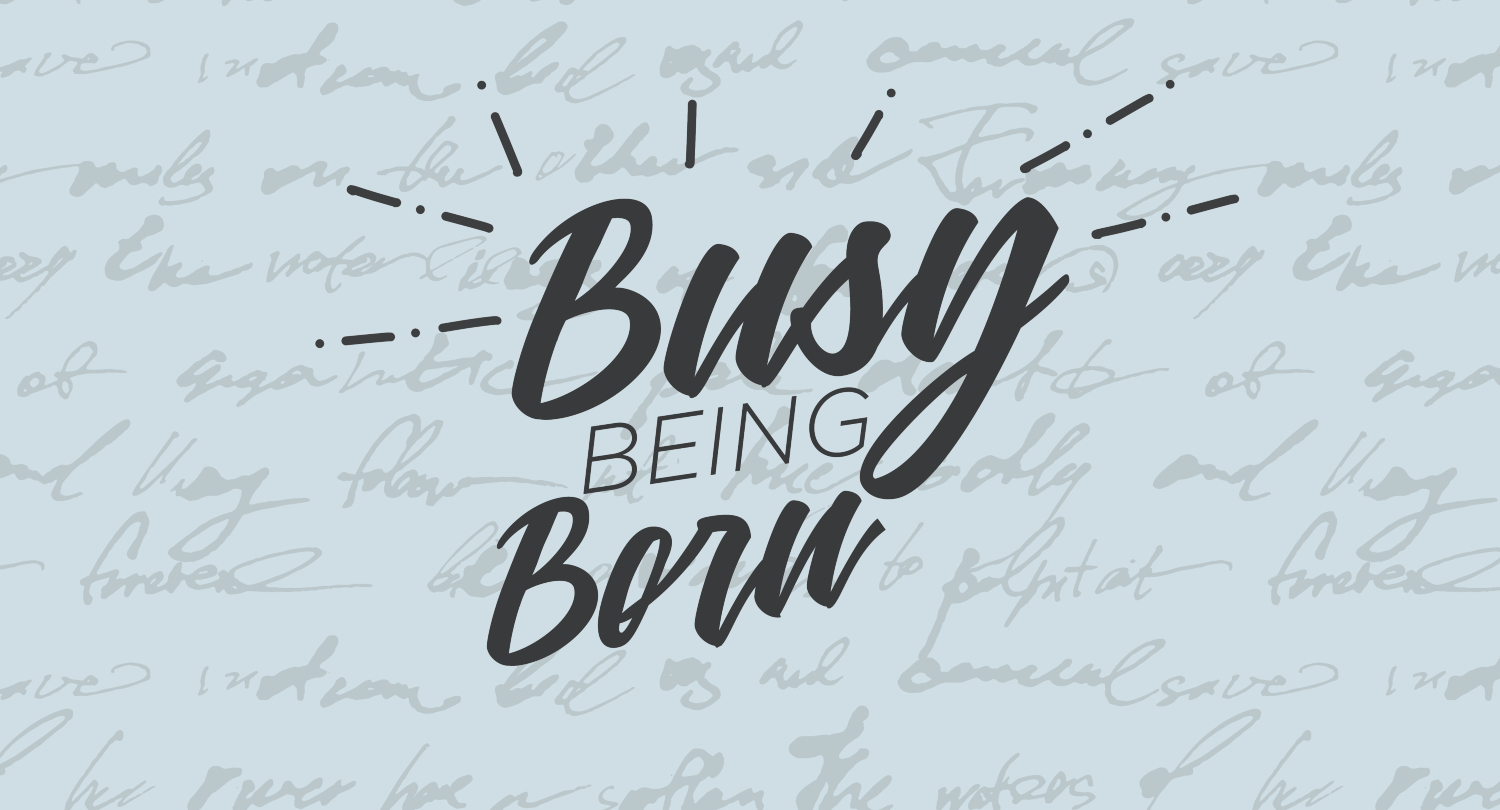 The Mindset of the Dying
There is a philosophy expressed in scripture, expounded on in Isaiah, denoting the hopelessness of Israel’s situation. Since they were going to be overtaken by Assyria at any time, they responded to the admonition of the Lord by saying, in Isaiah, And behold joy and gladness, slaying oxen, and killing sheep, eating flesh, and drinking wine: let us eat and drink; for tomorrow we shall die. Combined with statements by Solomon in Ecclesiastes and by the man who built bigger barns in Jesus’ parable, this evolved into the life philosophy, “Eat, drink, and be merry; for tomorrow we die.” This is the mindset of the dying. It has been said that man begins dying the day he is born. It seems that all of life is an exercise to prepare one for the reality of death. This is the mindset of the majority of human beings. Live for the moment, for the moment is all one has.

He Who is Not Busy Being Born is Busy Dying
People, in general, live in fear, one heartbeat from the end. Depression arises from the conflict of a soul that senses the eternal but is at war with a mind that is stuck on the temporal. My heart knows there is more, because Ecclesiastes 3:11 reveals that God has placed eternity in our hearts; but my mind refuses to acknowledge what it can’t see. As the youngest child of the family, I grew up listening to the music choice of my older siblings. It was the music of the original hippy generation. There was one singer who became known, perhaps against his will, as the voice of the generation. Bob Dylan’s philosophical music became the rebellious cry of an era, as he declared “The Times They Are A-changing.” From “Knockin’ on Heaven’s Door” to “Quin the Eskimo,” I grew up hearing my brother play his music, and ultimately became a fan myself. Something triggered my mind recently about one of his songs, so I looked up some of his works on YouTube. One song that I remembered was, “It’s Alright Ma, I’m Only Bleeding.” As I listened to his ranting, which is about the best description I know, he made a statement that hit me like the proverbial “ton of bricks.” He said, “He who is not busy being born is busy dying.” I backed it up and listened to that line several times. He who is not busy being born is busy dying. It has been said that poets, writers and people of the arts live in the fourth dimension. They feel a connection to a higher plane but struggle to define it. Consequently, they suffer a lot of depression from unanswered questions. They cannot just live, they must examine the meaning of life, and consequently the meaning of death. This statement by Dylan, in my opinion, is a masterpiece. He who is not busy being born is busy dying.

The Concepts of Birth
I opened this message by making a series of contrasting statements. Most people focus on the concepts of death. Life is a procession of deaths, life is a parade of goodbyes, life is an act of releasing, life is succession of sorrows. Life is a process of dying. It seems that the whole world is busy dying. But there is another way to look at life – the concepts of birth. Life is a procession of births. Life is parade of hellos, life is the act of embracing, life is a journey of hopes, life is a process of being born, and he who is not busy being born is busy dying. So, I had to stop and ask myself the question. Am I busy being born, or am I busy dying? This is not an easy question to honestly answer. I want to think that I am positive and a forward thinker, but the reality is that each day I live is one less day that I have to live. One comes to accept the fact that he has more past than future.

Our Time is Limited
Two times in my life the stark reality of death has hit me like a freight train: when I had a total physical breakdown at 37 years old and another serious health episode at the age of 58. When I was 37, I was convinced that I was living at the point of death. I recovered from that physically and emotionally. I was young and strong, and by God’s grace and the support of good people, I was able to overcome. My experience at age 58 was different. I was older. I was not as physically strong as before. And there is that reality of advancing age. Knowing the human lifespan, I realized even more that my time on earth is limited. When these thoughts pile up in a person’s mind, if he isn’t cautious, he will get busy dying.

The Resurrection
The reality is that life is a procession of deaths and life is a procession of births. John 12:24 declares, “Verily, verily, I say unto you, Except a corn of wheat fall into the ground and die, it abideth alone: but if it die, it bringeth forth much fruit.” In God’s design, death and birth go together. The act of dying is also the act of being born. The pain of death ushers one into the joy of birth. The parade of goodbyes becomes a parade of hellos. The act of releasing gives way to the act of embracing. A succession of sorrows gives birth to a journey of hopes. The process of dying is a process of being born. I Corinthians 15 is a masterpiece on the subject of resurrection. If there is no resurrection, we have no message, nothing to preach. If there is no resurrection, the whole gospel message is of no value, and Christ died in vain. Paul encapsulates the whole idea in 1 Corinthians 15:19, “If in this life only we have hope in Christ, we are of all men most miserable.” It sounds like a description of the life of those who are busy dying. The group Alabama projected the idea in a song, “All I’m really gonna’ do is live and die, But I’m in a hurry and don’t know why.” A good point to make is that people are in too big of a hurry, but it is really not accurate. Living and dying is not all I am going to do. There is a resurrection. What the world sees as death is really just a birth. Paul explains it in 1 Corinthians 15:42-44, “So also is the resurrection of the dead. It is sown in corruption; it is raised in incorruption: It is sown in dishonour; it is raised in glory: it is sown in weakness; it is raised in power: It is sown a natural body; it is raised a spiritual body.” There is a natural body, and there is a spiritual body.

Perpetual Life – Perpetual Birth
There are two ways to look at it. Life is a series of deaths, or life is a series of births. And, he who is not busy being born is busy dying. Peter used the phrase “being born again.” The term “born again” is used three times in scripture. In two instances it literally means to be born from above (John 3:3,7). But in this instance is means to beget again or to bring to birth again. It is then compared to the incorruptible seed of the Word of God. In other words, it is not a seed that perishes but that keeps recycling. In each death there is a birth. The grass and flowers of the field live and die, but the Word of God lives and lives. Perpetual life. Perpetual birth. I’m busy being born. The best is always ahead of the child of God. 1 Corinthians 2:9 tells us, “But as it is written, Eye hath not seen, nor ear heard, neither have entered into the heart of man, the things which God hath prepared for them that love him.”

Your View of Life
No matter where one is, or what one is facing, something is being born. One shouldn’t get too attached to that which is not eternal. If you do not let go of what is dying, you can never embrace what is being born. You may be feeling depressed and downhearted. You may be facing a life crisis for which you have no solution. You may have a broken heart. You may be busy dying. But God wants to turn your death into a birth. God wants to bring a victory out of your defeat. My mother was only 54 years old when my father died. They were both very faithful church members, but mom had a choice to make. What would she do with this death situation? She turned it into a birth situation and became a prayer warrior, a pastor’s jewel. When she died, three district superintendents and 38 preachers attended her funeral. She was just a little lady who lived out in the country in Louisiana, but she turned a death into a birth. She got busy being born, not busy dying. How do you want to view life? A succession of deaths or a succession of births? Are you busy being born, or are you busy dying?

Masking: How is The Church Dealing With It?