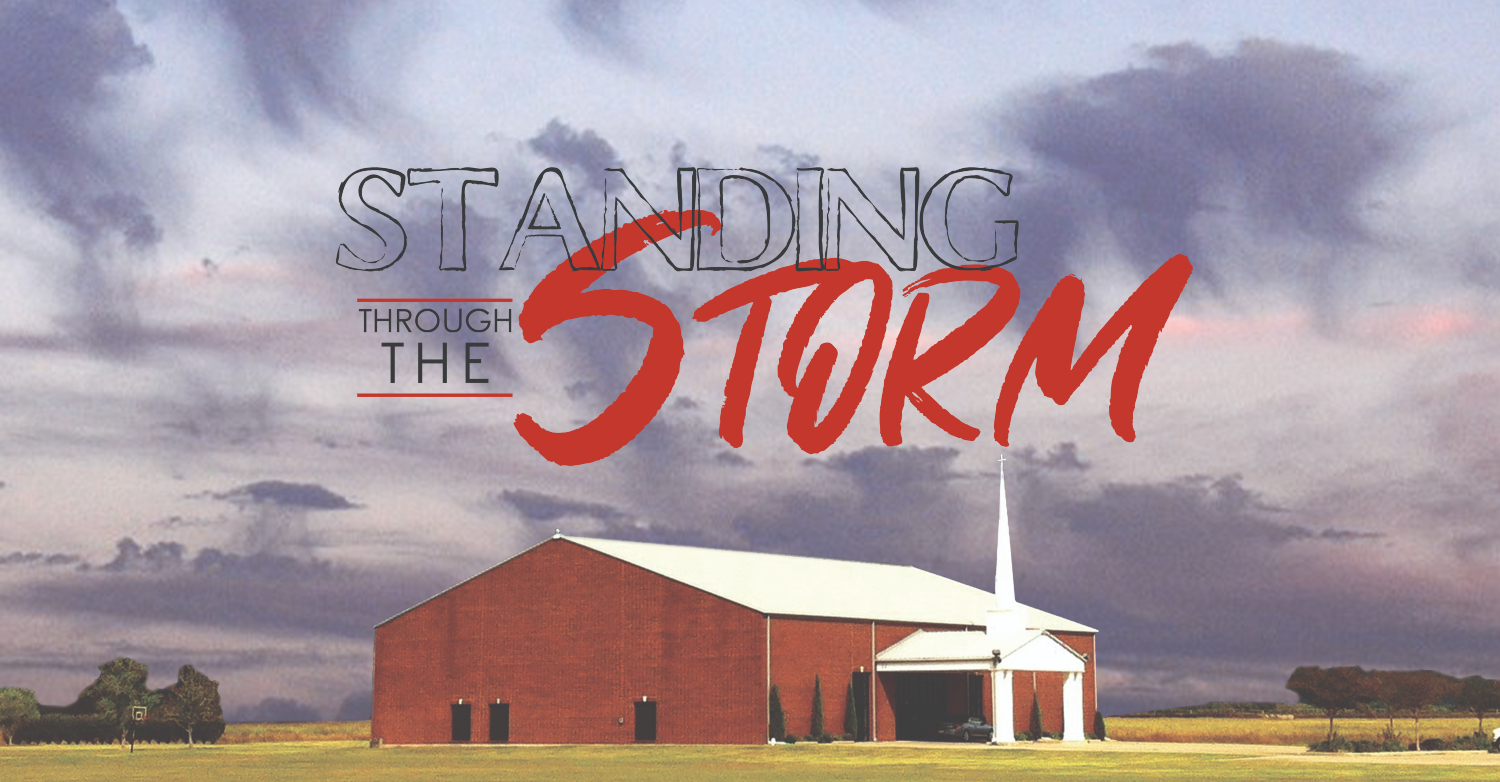 Standing Through the Storm

“Our area was forecast to be ground zero for Hurricane Harvey,” said Pastor Kevin Blake of the Apostolic Pentecostal Church of Bay City in Bay City, Texas. But as the huge storm rolled in and the skies opened up with a deluge of 40 inches of rain, God did something astounding before their eyes. Their church was spared!

Pastor Blake and his wife, Jeanine, have three married daughters (Tiffany, Laura and Lindsay) and five grandchildren, ages 2-7 years. He served 16 years in Global Missions under career appointment to Ghana, West Africa and the Northern Caribbean, including seven years as the Director of Faith Promise Ministries.

Pastor Blake believes the most important key to having a growing church is unity. He said, “We have elders who go as far back as Rev. Marvin Cole and Rev. Cleveland Becton. We focus a lot on honoring the past and preserving Apostolic heritage and try to communicate love for that heritage to our young people.

“I teach ministerial priorities in this sequence: 1) My soul . . . I must be saved, 2) My wife and our marriage, 3) Our children and grandchildren must be saved, 4) The ministry God has given us, 5) The church we minister to must be fed, 6) The individual members of the church must be loved, and 7) Our lifetime relationships and friendships must be kept strong.”

The Apostolic Pentecostal Church of Bay City has utilized many methods to increase attendance, including bus ministry, canvassing, etc. However, Pastor Blake believes the best method is still one-on-one witnessing, because no one else can influence those like the individual who knows them personally.

The church launched a Spanish daughter work a year ago that is growing, according to Pastor Blake. “We also have several small groups that meet regularly, such as Youth, Hyphen, Connect, Ladies Ministries, Marriage Ministries and Men’s groups,” he said. “Some of these groups meet twice monthly. What I try to do is have these groups create multiple opportunities for ministry at many different levels.” He stresses to his leaders that there are no throwaway services . . . every service must be an evangelistic opportunity.

The Apostolic Pentecostal Church has an ALS Sign Team, along with various other ministries. Sis. Blake is the Minister of Music and Choir Director, and their son-in-law, Joel, and their daughter, Tiffany (Blake) Williams (IBC alumni), serve as assistant pastor. The church has a Media Ministry, Jail Ministry and Nursing Home Ministry as well as teams for greeting, ushering, hospitality and cleaning.

Pastor Blake meets with all department leaders. He meets with the assistant pastor weekly and the church board two to four times a year. Department leaders have job descriptions, and the pastor holds regular planning sessions with them. All leaders and spouses are brought together each December for a planning session and workshop for the coming calendar year. “During this meeting, all new leaders are welcomed,” he explained, “and all job descriptions revisited. Reports from the leaders are given and a vision is cast for the coming year. We also have training and elective training, utilizing our own resources and those of Dr. David Bernard.”

The church currently has over 100 members involved in volunteer work and various ministries of the church.

“In 2017, our area was hit hard by Hurricane Harvey,” said Pastor Blake. “Bay City was forecast to be ground center of the storm that came in as a Category 4. We had 40 inches of rain, so flooding along the gulf coast here was intense, and some areas had 60 inches. At the peak of the flooding, however, the water came up to the middle of the thresholds of all of our exterior doors, but it never came into the building. Standing at our front door, we look up at the highway. The water crossed the highway but didn’t come into the building.”

Pastor Blake explained what he felt was the reason. “In the weeks prior to the storm, I dispatched carloads of people to each gate of the city. At every entry point to Bay City, we went to the city limit signs and prayed that the Lord would position angels and protect our city through the hurricane season, and I believe we saw God answer that prayer.”

He continued, “Before the storm, I preached on the ministry of angels. Later that afternoon, we walked outside and noticed our neighbors were out in the street looking up at the sky. We looked up to see a formation in the clouds that seemed to be more than just random clouds. We saw what appeared to be orderly ranks of angelic forms in a mile-wide ring around our neighborhood. They lingered overhead for nearly an hour, then lifted. We felt sure we had received confirmation that all of Heaven knew where we were.”

Pastor Blake said that for weeks, the saints of the Apostolic Pentecostal Church were scattered all over the country. Their church became a relief center. “I literally didn’t know where some of our people were,” he said. “But, several weeks later, all had returned safe, and it was a great testimony. And, in all of that, we baptized 53 that year and 50 received the Holy Ghost.”

Commenting on his personal ministry, Pastor Blake said, “In a nutshell, regarding my ministry, I understand that my ministry is not mine but the Lord’s.” He has always tried to be a faith-building preacher. “If faith is strong, fear and doubt are not,” he explained. “So that has always been a primary focus of our ministry.” He always endeavors to build confidence and a sense of continuity in young leaders, because his ambition in ministry is to hand over an intact Apostolic Pentecostal church to the next generation.

Apostolic Pentecostal Church of Bay City is blessed to have a nice facility and property of 10 acres with over 600 feet of highway frontage on Hwy. 35. In fact, the first thing people see when they come into Bay City on Hwy. 35 is the church. The building was built by Bro. Samuel Starks. The sanctuary seats 225 in the pews, and there are 11 classrooms, a large fellowship hall and a youth chapel that seats 50. When the Blakes came nine years ago, the attendance was 36. This year, the attendance has been 187 with 50 in the Spanish church, and the church is debt-free. Pastor Blake pastors the Spanish church as well, which meets most Sunday afternoons.

He described the process of acquiring the church property: “About 20 years ago, a small group of elders found this property, which was then just an overgrown patch of weeds. They purchased it for a reasonable price and began to clear it and build a church. The story was told how the elders gathered together and dug the first hole. They took off their caps, dug into their pockets and placed every cent they had in their pockets into that hole. It was less than $2 in change. They told the Lord He now had everything they owned, and they were trusting Him to do the rest. Today, the property is worth around two million dollars.”

The church is currently making plans for a new sanctuary that connects to the present building, and it will seat 500. The present facility will become a multi-purpose building. The average attendance has more than tripled in the past few years.

Bro. Blake was raised in the home of missionary parents, Rev. Larry and Sis. Ruth Blake. They started the first home missions church on the south side of Chicago in the ‘60s, then moved to Cutler, Ill. They were then appointed to Liberia in foreign missions where Bro. Blake spent his teenage years. He had received the Holy Ghost at the age of 10. The years in mission work greatly influenced his life, and he was called to the ministry in his early teens and began his ministry around the age of 22. In 1983, He graduated from Texas Bible College where he preached his first sermon.

After Bible school, Bro. Blake served as assistant pastor in Euless, Texas under Pastor John Benson for around four years. The Blakes then spent four years under appointment to West Africa. Arriving home, they took the church in Sparta, Ill., pastoring there for almost 10 years. They were then re-appointed back into missions as area coordinator in the North Caribbean. During the last seven years in missions, he served as Faith Promise Director, before coming to Bay City in October 2010.

His father and Bro. T.M. Jackson influenced his ministry the most, as well as Bro. Arless Glass, Bro. John Benson and Bro. K.V. Reeves.

Pastor Blake received a call late one night from the district superintendent, Bro. Ken Gurley, that a church near Houston needed a pastor. He told him, “While I was praying, your name came forcefully to my mind.” Bro. Blake agreed to pray about it, and they actually went to Bay City the next weekend. He said, “Before I knew anything about the church or had seen the city, I just felt in my spirit we were coming.” A short time later, they were elected 100 percent by the church. At the first service, held in September 2010, they baptized one. The average in attendance that first month was 36 people. The outreach method then was basically one-on-one. The church was previously pastored by Bro. Jonathan McClintock.

Pastor Blake enjoys fishing, hunting and photography in his leisure time. He enjoys reading books by Max Lucado. People would probably be surprised at how much he enjoys being in the wilderness. He likes to trade guns and cameras, and he loves spending time with his children and grandchildren.