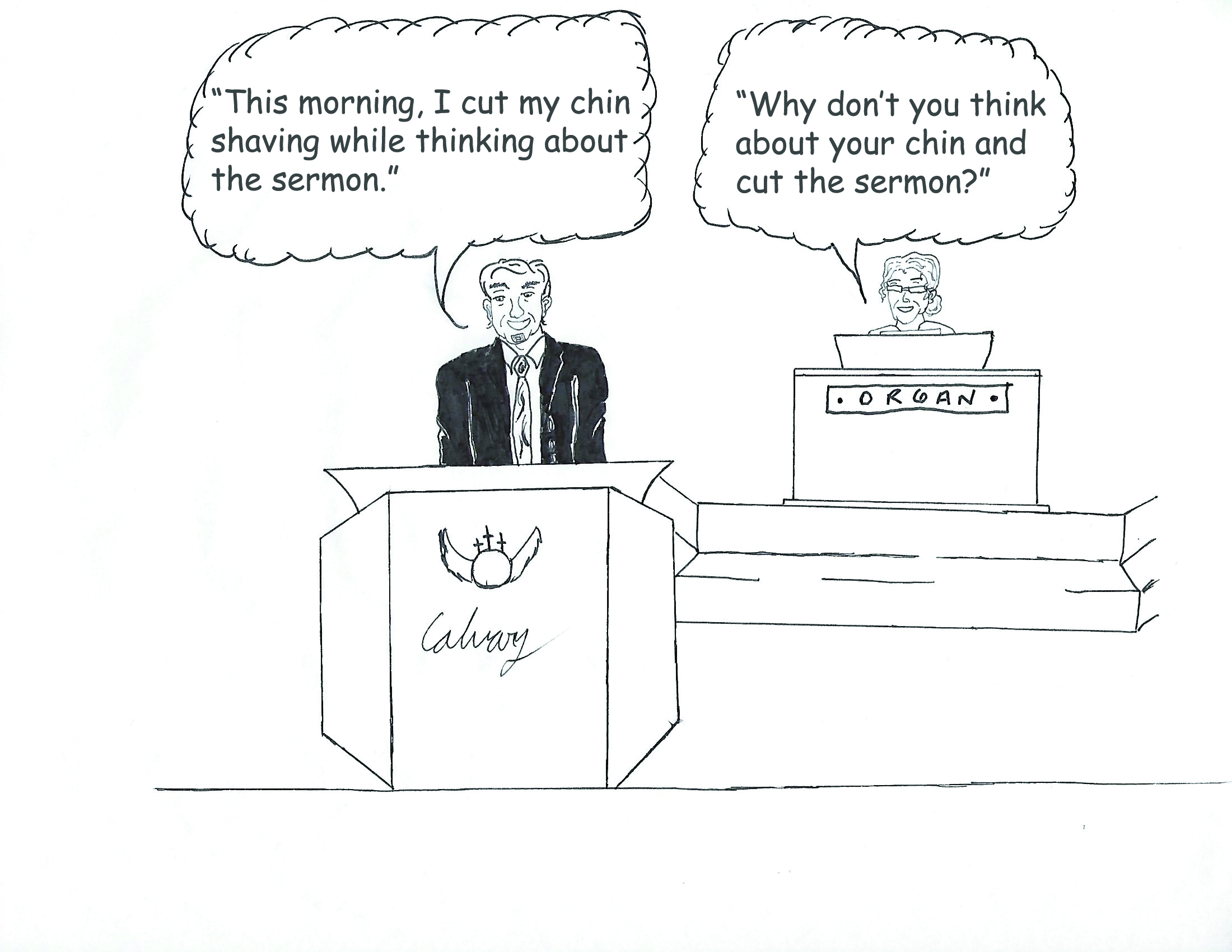 “It’s a great new idea I have to be a better steward of our resources,” he gasped. “I ran all the way home from the stewardship committee meeting behind the bus and saved $1.50.”

Greeting people at the door after Easter services, Pastor Mooney was delighted to shake hands with “Seldom-Seen” Steve, and even more delighted when he complimented him on his sermon and said service was “amazing.” Faced with such evidence of faithfulness, he asked why he didn’t come to church more often.

“I’m just following the Lord’s example,” he said. “If Christ can rise up early only one Sunday a year, that’s good enough for me, too!”

Pastor Mooney commenced praying with the words “Oh Lord, without you we are but dust.” As he paused for a dramatic effect, a small child’s voice was heard to say, “Mommy, what is butt dust?”

To prepare for his talk about global missions, Bro. Mooney had brought an inflatable globe the size of a beach ball. Misfortune struck when minutes before the talk, his globe sprang a leak and deflated.

Nonplused, Bro. Mooney used the limp prop to make a point: “Funny how, when you get rid of a lot of the hot air, the world isn’t very small after all.”

Pastor Mooney’s Sunday sermon was titled, “Forgive Your Enemies.” Toward the end of the service, He asked his congregation, “How many of you have forgiven their enemies”?

“Mrs. Jones?” inquired the preacher, “Are you not willing to forgive your enemies?”

“I don’t have any.” she replied, smiling sweetly.

“Mrs. Jones, That is very unusual. How old are you?” Pastor Mooney asked.

“Oh Mrs. Jones, what a blessing and a lesson to us all you are. Would you please come down in front of this congregation and tell us all how a person can live ninety-three years and not have an enemy in the world?”

The little sweetheart of a lady tottered down the aisle, faced the congregation, and said “I outlived the old hags.”

Pastor Mooney was preparing pancakes for the Sunday School breakfast when the children began arguing over who would get the first pancake. Bro. Mooney saw the opportunity for a moral lesson.

“If Jesus were sitting here,” he told them, “he would say, ‘Let my friend have the first pancake. I can wait.’”

One of the children turned to the other and said, “You be Jesus.”

The stranger approached Pastor Mooney after service and said, “I’d like you to pray for my hearing.”

Bro. Mooney placed his hands on the man’s ears and said a passionate, earnest prayer.

Looking surprised, the man said, “Well, it’s not until tomorrow.”

Pastor Mooney was worried about asking the congregation for money for repairs, so, he asked Sis. Mooney if she could play some inspirational music on the organ to get the congregation in a giving mood after he made his pitch.

During the service, Pastor Mooney said, “We still need $6,000 more for the new roof. Would those who can pledge at least $100 please stand up?”