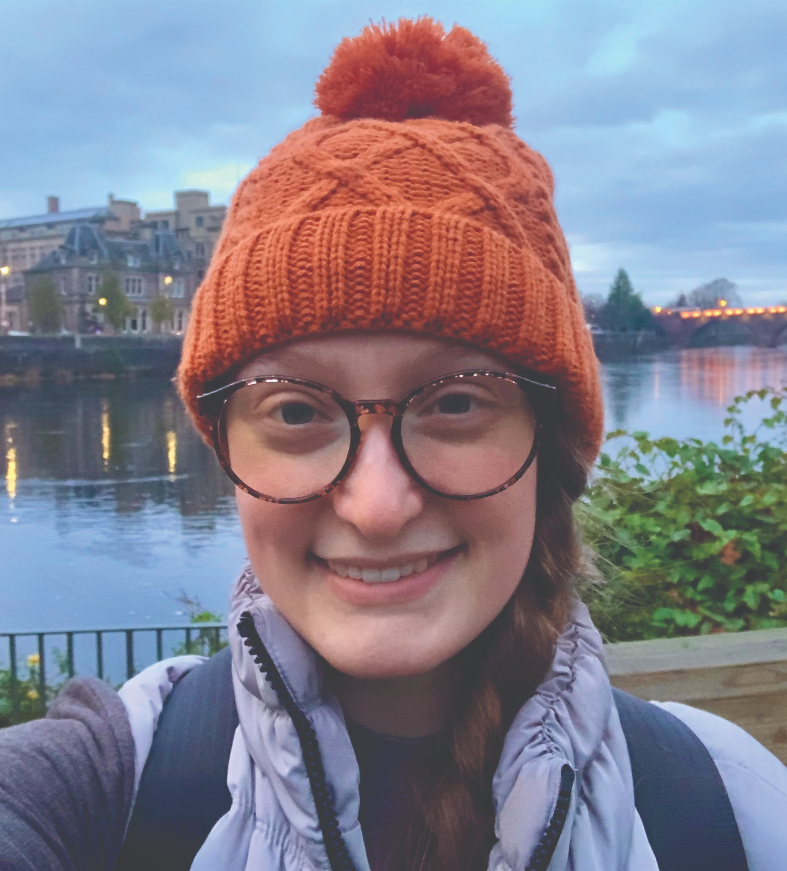 After two years of short-term missions work in Scotland, Kara Dibble returns to Indiana Bible College (IBC) this month to assume the position of front office secretary. She will be coming back to America with some valuable lessons learned abroad in terms of both material and spiritual priorities.

Kara graduated in 2018 and finished IBC’s fifth-year Advanced Leadership program under the direction of Biblical Studies Dean Bobby Killmon. Soon after, she began a Global Missions short-term missionary assignment as an instructor at Harvest Bible College in Glasgow, Scotland. More recently she has served as Harvest Bible College Academic Dean.

The full-time, onsite college was founded by resident missionaries Robert and Jerolyn Kelley and serves not just Scotland, but all the UPC of Great Britain and Ireland (GB&I). It is accredited with the British Accreditation Council, UPCI’s Global Association of Theological Studies, and endorsed by the UPC GB&I.

Kara said she went to Scotland with the desire to teach and minister, but now realizes that life there had valuable lessons for her, as well.

Cultural Adjustments From the Material Standpoint

In Scotland, “living with something you don’t need,” she said, “is excess and wasteful and reserved for the very wealthy. The houses and apartments are smaller; storage space, wardrobes, and even the cars are all smaller. Washing machines are standard, but dryers are considered a luxury. This makes one load of laundry a two-to-three-day process when the sun is shining.”

Grocery shopping was also different. “There’s no buying in bulk,” she said, “because it won’t fit in your fridge or cupboard. You walk to the grocery store every two days if not every day. It’s a mindset of ‘don’t be wasteful.’ At first, I hated having to go to the grocery store so often, but then I realized that I recognized the employees much quicker, and even the other shoppers. When I shifted my perspective from ‘what an inconvenience’ to ‘what an opportunity,’ I started to love what I used to hate.”

What would you advise others preparing to become involved in short-term and even long-term global missions work?

“Get over yourself! If you want to be of any positive use, you have to allow the Lord to bring you to a place where you see others instead of yourself. Learn to see things through the eyes of others,” she said. “Most of the time, you’ll end up being the one apologizing, instead of feeling offended over what you imagined they did to you.”

After you get your personal priorities straight, she said her next advice would be, “Teach Bible studies! If you can’t teach a Bible study, what do you think ministry is about? You don’t have to have a degree or know Greek and Hebrew. You just have to know the Lord Jesus. You don’t win people by bringing them to church. You win them by connecting and building relationships so that they can see the character of Christ shine through you. Don’t practice preaching skills; strive to know the Lord Jesus better so that you can introduce Him to others.”

What did she like the most about life in Scotland?

“The people I’ve met and the history they share, and the Highland scenic views. Every person you walk past has a story, and sometimes their story can change your life. Scotland is full of such rich history around every corner,” Kara said “As an American, it’s awe-inspiring to walk past a stone that has the year 843 A.D. engraved in it.”

At the same time, she returns to America with a renewed appreciation for her own country. “I have never been more thankful to be an American. We don’t get everything right, but it is the freest and most blessed country on earth. I think living abroad has helped me hone my focus. There are a lot of things that aren’t bad, but they aren’t the best, either. Many things we become consumed with begin to seem insignificant when compared to things eternal.”

What has been the biggest lesson you have learned in your missionary involvement?

What is it about IBC that makes you willing to accept a staff position?

“Leadership, excellence, vision, and integrity are the words on the IBC emblem. IBC takes these guiding principles and unapologetically stands for Truth. I have been personally changed by the impact of staff members in my life, and I hold it as an honor and privilege to turn around and do the same.”