One Snowy Day in December | Presidents Column Vol 31 No 12

One Snowy Day in December | Presidents Column Vol 31 No 12

One Snowy Day in December

Written by President Joshua B. Carson

“Remember them which have the rule over you, who have spoken unto you the word of God: whose faith follow, considering the end of their conversation” (Heb. 13:7 KJV). 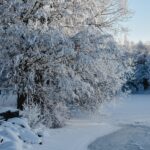 Most of the student body was quite excited about the several inches of snow that had fallen overnight, not to mention the sizable flakes still floating earthward. Plans for a sledding night had been circulating the IBC campus, making focusing on classes quite the challenge. It was probably the transition from high school to college that had many of us freshmen wishing we had received a class-free snow day. Nonetheless, we had made it through the morning lectures, present physically more than mentally, and lunch was a kind reprieve for making additional evening plans. Starch and soda were being happily consumed, helping make the freshman-fifteen easily achievable, while the when and where for sledding danced on lips around the room. However, those of us gathered were not prepared for the stupefying sight we were about to witness.

All attention was turned to the widows when someone said loudly, “Is that Bro. Mooney”? With large eyes and wide smiles, we watched the snowy scene unfold. Tables were emptied, and chairs were abandoned as we rushed to the windows. There, just outside, our college president and Calvary Tabernacle Pastor, The Rev. Paul D. Mooney, the man, the myth, and the legend, was engaged in an all-out snow fight with some of our fellow students. Standing in the applause of his dynamic preaching had been something normal to do, but standing to watch him bury an upperclassman into the snow felt just as good. Some of us hustled outside, to get in on the action and make memories for a lifetime. Later, we learned from the staff that this was not abnormal for Bro. Mooney–it was just our first time to experience it. Now, nearly twenty-two years later, most large snowfalls make me think about that day.

Inspired by God, the writer of Hebrews instructs us to remember and reflect what has been spoken by and lived out through our God-given leaders. This year, at our UPCI General Conference, our previous IBC President, Rev. Mooney, was inducted into the Order of the Faith. This induction is the highest honor of faithfulness and gratitude that can be afforded within our organization. His Apostolic ministry has always encouraged others and defended sound doctrine. Countless times over the years, I have stood with the masses to applaud his preaching or sat quietly with an attentive ear to absorb his teaching. In his classic style, there are stories he shared from a pulpit that are forever housed within my memory bank. However, during this snowy season, I’ve been reflecting on the day when he changed out his suit coat for a winter coat and his tie for a scarf. One snowy day in December I learned a lot about being successful in ministry by watching a great leader play in the snow. No doubt he was too busy for a snow fight that day. There were articles to write, meetings to attend, broadcasts to produce, messages to prepare for, and so much more; but, as a great Godly leader, he knew there was a fresh snowy platform to example another side of leadership.