Which is Called Sychar – Joshua B. Carson

Which is Called Sychar – Joshua B. Carson

Which is Called Sychar

“He left Judaea, and departed again into Galilee. And he must needs go through Samaria. Then came he to a city of Samaria, which is called Sychar, near to the parcel of ground that Jacob gave to his son Joseph” (John 4:3–5)

Sending twelve guys to buy lunch for thirteen seems like overkill. However, Jesus had a penciled-in appointment in an unlikely location with an unsuspecting individual. You can almost see the smile on his face as he sits in the sun watching her walking warily toward the well, an outcast among outcasts. The isolation of her current position portrays what has become a regular routine for her. Jesus simply asks for a drink and she immediately expresses how appalled she is. After all, she was a Samaritan and he was a Jew. Thankfully, her frustrations soon transition to revelation, and her demeanor shifts from accusation to appreciation. Acknowledging Christ’s understanding about the riddled relationships of her past and present seems to be a turning point for her. Soon her belief in Christ as Messiah would become obvious in her immediate evangelism of the people she had been seemingly avoiding. She is what we in the ministry would call a success story. We would want her testimony videoed and put on the church website.

To truly appreciate the power of her conversion, you need to understand the context of her life. Samaritans were a group of people with a rough history. Babylonians conquered the southern kingdom of Judah, exiling all but the lowest class of people. That pitiful remaining remnant began to intermarry with other non-Jewish groups, and as a result, the Samaritans came into existence. Their faith was a culmination of the Law of Moses, combined with oddly adopted superstitions. Therefore the Jews looked at them as half-breeds with false religion. Most Jews would take the long and more arduous process of walking around the region rather than traveling the more direct route through Samaria. However, there was more value to their location, especially the city “which is called Sychar,” than most gave them credit for (John 4:5). 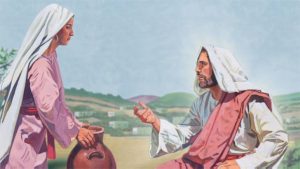 This city called Sychar was the same place as ancient Shechem, making it rich in history. Abram’s arrival and the building of the altar, fresh from Babylon, occurred here and can be read about in Genesis twelve. Shechem is the same area where Jacob purchases land, builds an altar, and establishes a well as discussed in Genesis thirty-three. Not only did Jacob give Joseph land here, but after his death, Joseph’s bones would be carried here according to Joshua 24. While it felt odd for some people of the time to see Jesus Christ walk into the region of Sychar, he was vividly in tune with its well-established altars of old. Unfortunately, somehow over time, Shechem became Sychar. Patriarchs had died, altars had crumbled, and Babylon had carried off the best people. The havoc caused by Babylon caused a people to be lost, their religion to become tainted, and value to be questioned. Babylon’s ultimate effect on Shechem turned it into a city “which is called Sychar.”

For clarity, let us realize that Babylon is a parallel for the enemy of our soul and the promises of God meant for his people. The spirit of Babylon is working hard in this day and age to carry away the best of you and your family. The enemy’s goal is the perversion of religion built on superstition more than Scripture. Ultimately, if Babylon can have its way, you will become known as Sychar rather than Shechem. Instead of power and promise, you will live with crumbled altars and forgotten promises. Babylon’s unwavering desire is for you to be lesser, weaker, and regarded as inferior. Therefore, we must recognize and accept Christ’s truth for our lives rather than the lies of Babylon. If God has a blessing for your family, let no one rename it as destruction. If God has promised truth and clarity, do not allow Babylon’s attacks to institute a name change to confusion. Let us take hold of our families, keep them close and declare in the face of Babylon: we choose the promise of Shechem, not the confusion of Sychar.