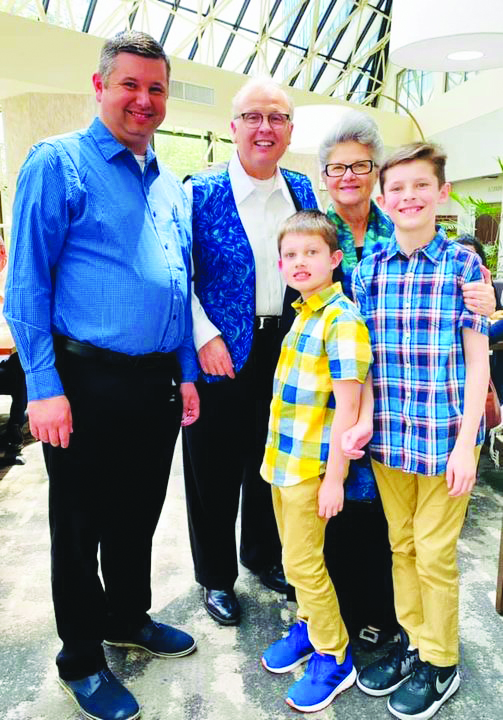 Missionary Matthew Buckland, a 2001 graduate of Indiana Bible College (IBC), faces some unusual challenges in directing his own Bible college program in the Central European Czech Republic.  Take, for example, the unusual research paper turned in by one of his students who happens to hold a PhD in Physics and Chemistry.

“I was teaching a unit on apologetics to our students,” Brother Buckland said, “and gave them an assignment to give a brief proof of God without using the Bible, but instead utilizing one of the various philosophical or scientific proofs.”  The unusual paper that particular student turned in, he said, “was a five-page chemical reaction.”

Brother Buckland went to his student to ask, “‘What am I looking at?’  He told me that it was a chemical reaction he had discovered that should not be possible in the natural world.  He said it was through observing this reaction that he realized there must be something greater than us.”

The large number of well-educated adults in Prague, paradoxically coupled with a high degree of Biblical ignorance in one of the most secular and atheistic populations of Europe, means Matthew Buckland and his wife, Angie, must take a different approach to evangelism and discipling.

“This changes our starting point for witnessing,” he said, “and creates a massive learning curve for new converts, as they are coming from an almost entirely secular background with no biblical/Christian foundation whatsoever.”

Introduced by a mutual friend, Matthew Buckland met his wife, Angie, while he was a student at IBC and she was a student at Butler University in Indianapolis.  They have been married for 17 years and have two sons: Grant, fourteen, and Pierce, seven.  His advice to new missionaries with children is, “Recognize that your family is your number-one priority.”

Bro. Buckland, son of Global Missions Pacific Regional Director, Roger Buckland and his wife, Becky, was raised on the mission field himself.  He was five years old when his parents were appointed to the Philippines.  Later, they were the pioneer missionaries to the Czech Republic, beginning the work there not long after the fall of communism.

His American, Philippine, and Czech experiences have helped give him a “greater depth of understanding of the way people act and interact.  It helps you realize the role a person’s culture has in influencing the way they view the world around them.”

Language proficiency has helped him and his wife gain acceptance in the Czech culture.  Still, he observed, “no matter how well-accepted you are, there will always be a level at which

you are still an outsider.  The role of a missionary is to lessen that gap as much as is humanly possible and to integrate and become conversant with the culture of your nation.”

His years at IBC played a special part in his preparation for ministry, Brother Buckland said.  “It was in a Tuesday night student body prayer that I received my calling to ministry and I will never forget that evening.”  The friendships he gained at IBC have continued through the years.  “The friendships I made during my time at school have been some of my closest relationships in ministry to this day.  Anywhere I go in the world, I am just a phone call away from support.”

His formal education did not stop at IBC.  “I decided to continue my education because a desire for more was birthed within me at IBC.”  He went on to earn a Masters Degree at Urshan Graduate School of Theology.

What would he advise those planning to become involved in global missions through Associates in Missions or Next Steps assignments?

“Glean as much as you can from your host/overseeing missionary.  Recognize that you do not go in and change the world overnight.  There is a learning curve to becoming effective in ministry in a foreign culture.  Take time to learn and recognize the process involved with that learning.  Recognize that you will have to adapt to the location where you are working, and not the other way around.”

The role of a missionary, he said, “is to facilitate growth while maintaining doctrinal integrity.  We are called to build a biblical church, not a North American church, and if you are going to be involved in building something that lasts, it will take time.  God often changes us more than we change the place where we are called.”

Brother Buckland serves as superintendent of the work in the Czech Republic, and instructor and administrator of a Bible college connected with the Global Association of Theological Studies (GATS), a vital part of raising up national ministers and establishing preaching points throughout the country.  He is also a regular teacher in Bible colleges in Serbia, Slovakia, Austria, and Scotland.