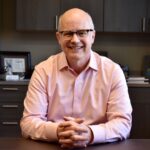 Bro. Miller, tell us a little about yourself and your ministry.

I’m a third-generation Pentecostal who has been immensely blessed by the relationships, teachings, and foundation that this history has provided. I’ve had the privilege to minister as my primary occupation since graduating from college. I currently serve as Pastor of Living Faith in Everett, Washington, and have served other congregations in various roles. Over the years I’ve been invited to serve the UPCI in a few positions and have traveled North America extensively as a result of such opportunities

Why did you write “Independence is Overrated?” What does this title mean and what is the story behind your choice to write this book?

Like many pastors, I found myself wondering why some people develop more quickly in their discipleship, while others get stuck or progress more slowly. I further observed that different people develop at different rates in different areas. While some seem to rapidly develop in prayer, others struggle. While some may quickly embrace tithes and offerings, others lag behind. Why is that? I have realized that many people look for change to remove pain in their lives. Once pain is gone, many are happy to simply exist. Others move beyond existence and into biblical growth. Some transcend personal growth to thrive in Christ, impacting others. Why do some progress and others stagnate? My response to these observations began with a sermon series in 2017 that kicked off on July 4th. I wanted to explore how a distorted view of American independence potentially hinders Christian growth as we encounter aspects of discipleship that our flesh dislikes. When invited by Jesus to greater things in His Kingdom, our acceptance of that invitation requires surrender. In time, those messages further developed into Independence is Overrated

Why should Apostolics buy this book? What will they learn and what topics do you cover?

This resource reveals the incredible value of surrender and how it is required in stages or dimensions in our lives. Rather than just one moment of surrender when we first turn to Jesus, I believe that surrender occurs throughout our discipleship and that there are overlapping elements of surrender. The book presents surrender in common areas such as the Lord’s power, the Lord’s purpose, the Lord’s people, and others. While the book does not exhaustively explain these areas, it presents them sufficiently to consider each, and further, how each surrender interacts with or is a prerequisite for other surrenders. Disciples should purchase this book to add perspective to their own progress in following Christ, and also to better appreciate the progress of those they are leading toward Him

What do you mean by a “life of surrender?”  How can the average Apostolic practice a surrendered life, yet live an overcoming life?

This is exactly the tension that I address in the book. In our mere humanity, surrender sounds completely contrary to victory. However, surrendering our ordinary humanity to the Lord’s divinity is the essence of victorious discipleship. As John said, “He must increase, but I must decrease.” (John 3:30) Addressing the Roman church, the Apostle Paul made it clear that we serve the One to whom we surrender. Victory in righteousness and everlasting life result from surrender to God (Romans 6:15-23). Though humanly counterintuitive, surrender invites Christian victory. As for a “life” of surrender, there are inherent, ongoing surrenders that result from maturity, both physical and spiritual. I was privileged to receive the Holy Spirit at six years of age. In that holy moment, I sincerely surrendered all to Jesus Christ. Yet, when I became a preteen, there were new understandings and invitations that weren’t on my radar as a six-year-old. These new things required new surrender so that I could continue to grow in Christ. Similar new understandings have been revealed throughout my life; as a teen, young married, new parent, middle-aged leader, and now as an empty-nester. Whether due to spiritual or human growth, life stages present new needs for surrender as we successfully follow Him

What kind of feedback are you receiving? Can you share some success stories of how your book has helped people or churches?

As the book was just released on August 31, most of the feedback I have received is from my personal relationships. The greatest appreciation is adjusted expectations in self and others. As we appreciate areas of surrender in God’s Word as Paul described “milk and meat,” then we are better able to help ourselves and others going forward. As we understand surrender to the Lord’s principles as a “meaty” surrender, we’ll not errantly choke someone who is still surrendering to “milk.” Likewise, those stagnant will not grow while only surrendering to beginning things, such as the Lord’s promises. Further growth requires new dimensions of surrender. Grasping the progression and interweaving of multiple surrenders helps individuals identify their own progression (the book contains a practical illustration of this). This insight alleviates frustration and inspires progression within our own lives and in those we are discipling

How is this book best used? If a church does not have small groups, how might this be taught effectively?

This resource can be used in any teaching environment. Ideally, each participant reads the material on her own prior to teaching a lesson, and then one aspect of the chapter can be the focus of a teaching session. As already noted, the content within the surrender chapters allows for further biblical study. After reading the chapter on promises, presenters can recognize related biblical illustrations and present that material to enrich understanding. Presenters can also use the video vignettes to help with this (see below). Those uncomfortable with a discussion format might invite one of the participants to facilitate a conversation that begins with questions provided at the conclusion of each chapter.

The six video sessions – are these live teaching sessions?

The videos are supplemental to the book. Each runs roughly eight minutes and presents a visual illustration for the topic covered, providing additional material for consideration and discussion. Most of them were shot outdoors in the beautiful Seattle area. The backdrops are more than intriguing scenes, but teaching elements to help participants further grasp the concepts within each segment

How can the book be purchased, and what is the cost?

Costs range from $8.99 to $34.99, depending on the media. The small group kit, paperback book, and eBook are available at pentecostalpublishing.com. The book is also available on Audible. I can be reached at pastormiller@livingfaithtabernacle.org.