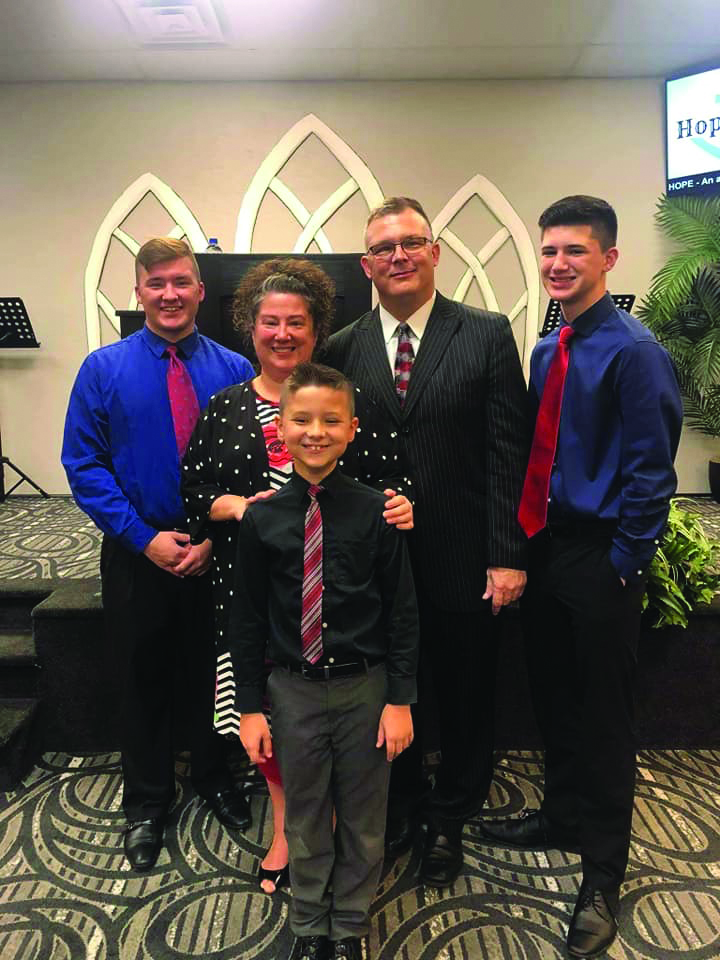 Pastor Dagan, tell us a little about yourself and your ministry:

I was raised in the Tampa, Florida area. I was first exposed to the Apostolic truth through a new convert fellow football player. I was saved while in college at the University of Louisiana Monroe. The Lord allowed me to graduate with a BA degree. I met my wonderful wife, DaVida while in college. She is a fourth-generation Apostolic. The Lord has blessed us with three wonderful, healthy sons. I was reached through a joint daughter work of the late elders Fred J. Foster and George C. Coleman. Mark Foster was our pastor when God called us to Southwest Florida to plant a church in Charlotte County, Florida, in the Spring of 2003. This is a county of 190,000 people. We were honored to plant the first United Pentecostal Church in this county.

How do you respond to the view that prophecy teaching is too difficult, too many views, too hard to understand?

I agree that some portions of prophecy are very challenging but if we will set aside time and study the Bible with a prayerful, focused spirit, God will illuminate His revelation and quicken our understanding. (I Corinthians 13:9, 12; I John 3:2). In terms of studying end-time prophecy, I suggest you start with the book of Daniel. Then, move on to the book of Revelation. As part of your foundational study, you should include the Olivet Discourse (Matthew 24-25; Mark 13; Luke 21) and Paul’s two epistles to the Thessalonians. Study your Bible. Don’t just read it; study it! Jude 22-23: “And of some have compassion, making a difference: And others save with fear, pulling them out of the fire…” When Jesus preached about the days when the Son of Man is revealed (Luke 17:26-30), he declared it would be as it was in the days of Noah and Lot. He went on to say that fire and brimstone from heaven came down and destroyed them all. The mere preaching and teaching about the scenes of the end times should shake and stir people to the very depth of their souls! I would be deeply concerned if they were not frightened and motivated to make their calling and election sure.

Are we in the last days?

Yes, without question (Joel 2:28; Acts 2:17). The last days began as the church was founded in Acts 2:1-4. The time of the Gentiles is coming to an end (Matthew 15:22-28; Luke 21:24; John 1:11, 8:57-59, 10:30-33; Romans 11:7-11, 25-27; Acts 3:12-26). All the “end-time prophecy” signs are fulfilled with the exception of Ezekiel 38-39 (Gog and Magog conflict). I hold the view that this conflict ushers in the person of the Antichrist. I believe we are in the midst of the greatest harvest of new and restored souls the church has ever seen, and after this will come the Rapture. Pay close attention to Israel, God’s eternal indicator of end-time events. We should also be aware of the rising confrontation between God’s true Apostolic Church and the Apostate Religious Group in the world today. The apostate is seen as the miry clay blended with the iron (a type of the Roman system) in the feet of the image of Daniel 2. The move towards globalism and a form of religion that is acceptable to the government powers of the world is a great sign of the rising spirit of Antichrist and is a prelude to the person of the Antichrist.

Will there be a Pre-, Mid-, Or Post-Tribulation Rapture?

Without question, there will be a Pre-Tribulation Rapture. The Bride of Christ, the church, will not go through the wrath. (I Thessalonians 1:9-10, 5:9; Romans 5:9; Revelation 3:8-11 compared with 2:22). The church or churches is mentioned twenty times in Revelation chapter 1 to 3. However, in the Tribulation chapters (6 to 18), you do not read the word “church” one time. Furthermore, you do not read one clear recording of a single person being baptized in water in Jesus’ name or receiving the Holy Ghost with the sign of tongues in any of the Tribulation chapters. The Spirit came down when the church began, and it will go up at the Rapture of the church. “He who now letteth” will be taken out of the earth at the Rapture of the church (II Thessalonians 2:1-9). The Bride will be caught up. The many prophecies in the Old Testament concerning being filled and baptized with the Spirit of God are tied to the Church Age. The Spirit of God will still be in the earth, just not as it was at Pentecost dwelling in the souls of men and women.

In your opinion, what happens to the USA during the Tribulation? Does the USA have a role in end-time prophecy? Is the USA mentioned in the Bible?

In Revelation 12:14, we see the woman/Israel (Revelation 12:1 with Genesis 37:9-11) aided by the two eagles’ wings. Perhaps this is the USA. After a vote of the United Nations, Israel was reborn as a recognized nation on May 14, 1948. Seventy years later, almost to the hour, President Donald J. Trump had the U.S. Embassy moved to Jerusalem. I believe the world powers will have a role in the last days. However, I think it is very important to view these prophecies through the lens of the time period that they were given and to always keep Israel at the center of end-time prophecy. America’s military, wealth, and population keeps her on the front of the global stage until the Tribulation. Then, everything shifts back to the Middle East and the surrounding areas.

Tell us about your book, The Unveiling.  Why did you write this and who needs to read it?

As the church of the living God, we must be aware of the Spirit of Antichrist and Jesus’ warnings concerning deception as a sign of the end. This apostate, ungodly spirit and deception are going to be two key weapons that Satan uses in this last hour. The greatest need we have in the army of the Lord today is for more soul winners and intercessory prayer warriors!

You may order Bro. Dagan’s book by going to: hopeapostolicupc.org (Go to “Online Store” and the books are listed). It is a 340-page study guide, and the cost is $30.00. If you have questions, you may contact Pastor Dagan, with your pastor’s blessings, at pastordagan@gmail.com.