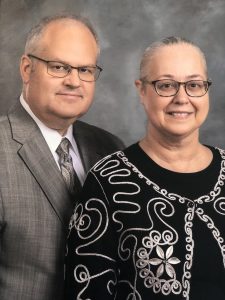 “We’re just an average blue-collar church,” said Pastor Philip Harrelson of Dothan, AL. “We don’t have all the bells and whistles at The Pentecostals of Dothan, but we have good church services that emphasize prayer, worship, and preaching.”
He and his wife Teresa, have three children; Justin, married to Alyssa, and Nathan, married to Tabitha, and both are licensed ministers. Nathan serves on the Alabama District Youth Committee as the promotions director for the state. Their daughter, Lauren, is involved in a variety of ministries as well.
Bro. Harrelson served as Alabama District Sunday School Secretary for 12 years and as Senior Quiz Coordinator for 8 years. He has served on the Alabama District Board since 2006 and is responsible for the District Licensing Seminar. He also served as Executive Presbyter in 2015 and 2016. 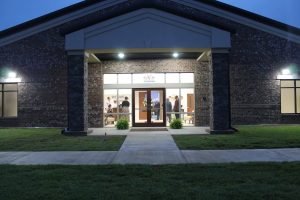 Organization & Management
The ministries of The Pentecostals of Dothan include a Youth Pastor and a good-sized youth ministry called Power Supply. They sent around 60 people, including the chaperones, to Youth Congress 2019. They have a sanctuary choir and a Christmas presentation each year that literally packs out the church. And, there is a Hyphen Ministry class on Sunday morning. 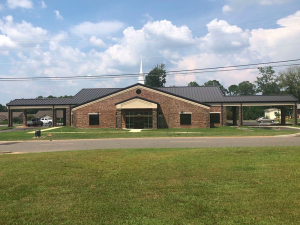 “I believe Sunday School is very important,” said Pastor. “Although some churches have gotten away from it, Sunday School has worked well for us all through the years.”
“The church had been granted access to a jail ministry through an elderly Assembly of God man,” said Pastor Harrelson, “But, when a reformed Baptist minister replaced him, we were told we couldn’t come back. We are involved, however, in a drug/alcohol rehab center called The Haven and send several men to preach and a group to sing in their chapel service four Sundays a month.”
Bro. Harrelson teaches various classes with lay ministers and other church members weekly in a setting similar to a Bible college setting, using notes and textbooks. The veteran Sunday School teachers help with training new teachers as they develop spiritually. He said, “The challenge facing teacher training is mainly the time factor.”
At The Pentecostals of Dothan, 60% of the congregation are involved in some form of ministry, and most are involved in some aspect of service. Since moving into the new facility, they are working diligently to get more involved. 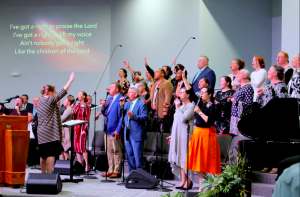 Principles of Growth & Revival
“We focus on prayer and having good church,” said Pastor. “The first week of every month, we have a prayer revival that begins at 6:30 P.M. Monday night and goes through Wednesday night. We place a strong emphasis on pre-service prayer, and prayer is always in the sanctuary. I don’t want guests to come in and be confused about what kind of church we are. Seeing our people praying in the altars and at their seats creates a culture for the Lord to draw new people in and gives them an understanding that this is just what we do. We have lengthy altar services where people experience salvation, consecration, personal deliverance and encouragement. I preach on prayer regularly and emphasize Bible reading. We have found that prayer and good church works best for church growth. We do teach Bible studies. However, I gave Bible studies at the hospital and never won anyone. I made up my mind if a study takes weeks or months, I’ll just keep going and do a smaller volume. Now there are people sitting on our pews that I have won like that. And we have won people who created relationships through small groups.” 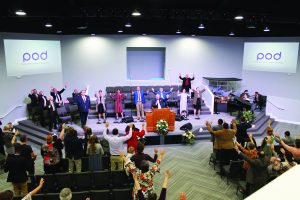 Ministry Philosophy
Working with physicians in the medical field, Bro. Harrelson saw how disciplined most of them were. He told his wife, “When I go full time, I plan to get up early just as I have done for the hospital.” He worked as an R.N. and was bi-vocational until 2006, then worked some in a cath lab until 2014. It got too busy with the church and the hospital, so he let go of the hospital he had worked at since 1985 and became a full-time pastor. 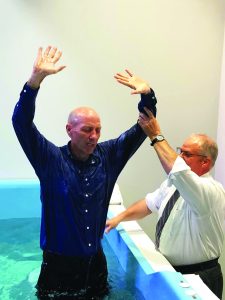 Pastor takes what the Apostles said in Acts 6:4 very seriously; “But we will give ourselves continually to prayer and to the ministry of the Word.” He spends most of his days at the church praying and studying. He said, “I don’t like to separate how much time I give to prayer from how much time I spend studying. I keep them working together by immersing myself in scripture, and prayer flows out of that.”
Pastor enjoys expository preaching. He said, “I just preach my way through the Bible. One of my greatest fears for our generation is that we’re incredibly Biblically illiterate. We may get nostalgic about those elders of yesteryear, but they could quote the Bible and knew it backwards and forwards. I want to encourage that among the younger ministers that I am able to influence.”

Personal Ministry
Bro. Harrelson felt his call to preach at 16, but wasn’t certain, so he went to R.N. school with the intention of going to anesthesia school. Then, having unsettled feelings about pursuing the anesthesia schooling, he ended up going to Houston. He explained, “My wife’s an R.N., and our son, Justin, is now a C.R.N.A. My daughter and both of my daughters-in-law are also nurses who work in the medical field as well. Around this area, most pastors are bi-vocational, so I told our sons even if they pastored someday, they needed to be skilled so they could have a job if it was needed. I was actually going back to nurse practitioner school when I was voted in as one of the Regional Executive Presbyters for a term 2015-16 and put that endeavor on hold for the time being.” 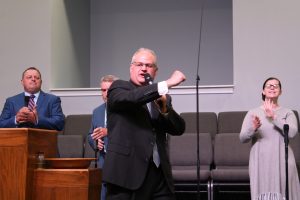 Pastor Harrelson said, “When we came back to Dothan after graduating from Texas Bible College in 1992, it was not my intention to be here long-term. We tried to leave several times, even work in Home Missions works, but it wasn’t the will of God. In retrospect, I can now see that it was the will of God for us to be in Dothan.”
The guiding principles of Pastor Harrelson’s ministry is seeking God, prayer and staying in the Word. His life has been influenced by many great men like Bro. Joe Patterson, Bro. Anthony Mangun, Bro. J.R. Ensey, Bro. John Harrell and Bro. Kelsey Griffin. “These men emphasized preaching the Word and having simple church,” said Bro. Harrelson. “Bro. Anthony Mangun is one of my heroes and has become a friend as the years have gone by. I have followed his ministry from Because of the Times conferences since my early ministry. It had a huge impact on my life. I literally have 700 cassette tapes and around 300 CDs of his messages from 1994-2003. I was Senior Bible Quiz Coordinator and District Sunday School Secretary, so I traveled all over the district listening to them while going to ministry engagements. Bro. Mangun inspired me by encouraging people to get involved in prayer and soul winning, and by his strong principle that the church is the main focus in our lives. I weave that into my preaching. I was also greatly influenced by Bro. Fauss’s strong conviction messages and men like Rev. A.D. Spears, Rev. James Kilgore, Rev. N.A. Urshan and Rev. Keith Clark.”

Bro. Harrelson attended TBC for three years, then came home and attended a small seminary in Dothan where he received a Bachelors in Theology and a Master of Ministry. He also holds an Associate Degree in the medical field.

Current Facility
“The church was started by my in-laws, Bro. & Sis. Joe Patterson in August, 1967 in an old house located in a residential area,” said Pastor Harrelson. “My parents came to town on a Saturday, saw them scrubbing out this old house and got involved. In those days, it was hard financially to get churches going, so there was a lot of peanut brittle sold, etc. From there, the church moved to an old house on our current property. It was torn down, and my father-in-law built a new church in 1976. His hero, Bro. Kilgore, preached the dedication service. The Patterson’s invested their entire lives into the building of the church in Dothan.”
Bro. Harrelson took the church in January of 2006. He grew up in Dothan, got the Holy Ghost at 7, was baptized by Bro. Patterson and ordained 31 years to the day. Attendance back then was in the 120’s. His father-in-law is still there and still preaches. They have had several missionary families come out of the church, including missionaries Michael and Jill Patterson serving in Romania and Craig and Lyna Sully serving in Senegal, and a number of young men and women who also have served as AIMers.

The church purchased right at three acres behind them, and built a new church that includes twelve Sunday School rooms and a worship center with administrative and educational areas, totaling about 12,000 Sq. Ft. The seating capacity went from 140 to 300. They moved into the new building in August 2019 and have already seen the benefits of having more room and parking.

Human Interest
Pastor Harrelson’s favorite family time activity is chasing lighthouses, especially with their children when they were younger, from Jupiter, FL. to Virginia Beach on the East Coast. His favorite is Saint Simons Island, and the most beautiful one is at St. Augustine.
His favorite leisure activity is reading, including The Puritans, Leonard Ravenhill, A.W. Tozer and fictional author Daniel Silva. He collects old and rare Bibles. His favorite preachers are Bro. Anthony Mangun, Bro. Harrell and Bro. Jeff Arnold among others.