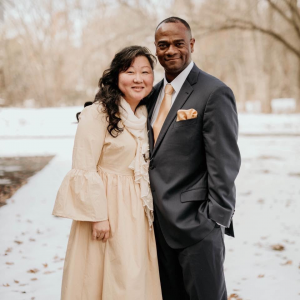 “Therefore, we are ambassadors for Christ, as though God did beseech you by us;
we pray you in Christ’s stead, be ye reconciled to God.”
2 Corinthians 5:20

Almost seven years ago God opened an astounding door to the United Nations! We have now baptized 36 global leaders in the name of Jesus Christ, and thousands have been baptized around the world as a result of our tours of duty!
We are gearing up for one of the greatest years we’ve ever had. Last week, in our United Nations Bible study, a group of people from Myanmar walked in. One lady told me after the study that she was shaking throughout the entire session. I had seen the power of God on her. She explained, “We’re strict Buddhists and know nothing about Christianity. My husband’s father was Catholic, and his mother was Jewish. Upon reading one of his books titled Simple Bible Stories, I read about this man, Jesus, and I could not get him out of my head. I was told that the Christian Chaplain here was having a Bible study.” In an email, she told me her husband was also interested in hearing more about Jesus.
God’s doing things we’ve never seen before, and he is putting together a network of believers that are risk takers that will shake this entire world. Stretch your faith for the Kingdom, and see what God will do. My subject today is, “We Are Ambassadors.” As we get closer to the finale, it’s imperative to believers that we understand who we are and what we are supposed to do.

The Next Generation
We need to always caution the next generation to be humble and to not be lifted up, but I fear keeping them down and never turning them loose to tap into their potential. Have you noticed more and more young people are getting into secular interests rather than the priority of the Kingdom? It’s time we turn this generation loose and tell them who they are and what they are to do. The military employs twenty-one year olds, entrusting them with millions of dollars worth of equipment.

The Word Plenipotentiary
As ambassadors, we’re just scratching the surface of the power that has been given us. 2 Corinthians 5:19-20 says, “To wit, that God was in Christ, reconciling the world unto himself, not imputing their trespasses unto them; and hath committed unto us the word of reconciliation. Now then we are ambassadors for Christ…” God has commissioned us and appointed us to be ambassadors. We say, “That’s exciting! Sign me up, but what is an ambassador?”
The word ambassador originated from the word plenipotentiary, which comes from two Latin root words; plenus, meaning full and potens, meaning power. It refers to a person who has been invested with full power! The term refers to a diplomat who has been fully authorized to represent his sovereignty (supreme power or authority.) The scripture referring to you as an ambassador has labeled you with an ancient term of authority, granting you full power to represent the Kingdom of the most high God! You are not someone to just sit on a pew!
The world doesn’t understand our dress, our conduct, our worship or our doctrine. We don’t really care if they understand, because we’re just here temporarily. Too many Apostolics act like they belong here. Don’t get used to this world. We’re going somewhere!
Upon my appointment to the United Nations as a secular ambassador, the revelation of who we really are as God’s ambassadors was revealed to me. The appointment of secular ambassadors almost seems like the title was stolen from the Word of God. When you are appointed as an ambassador, you never lose your title. Even if retired, you are called the former ambassador. It’s a lofty appointment, and you have it with you always.

We Have Been Given Full Power
When I finished speaking at the General Assembly, my appointment post on Twitter read, “This is Reverend Art Wilson, Goodwill Ambassador and Special Envoy on Peace and Development to the World Association of the United Nations Interns and Fellows.”
With your appointment you receive papers specifying your areas of authority and operations. They tell who you are and then give your title of authority. There are all kinds of ambassadors, but the Goodwill Ambassador is a bridge builder, working across the table with those who are disagreeing. I tell them, “Hey guys, I’m the good guy. I’m here to help.”
In Matthew 16:18-19, Christ’s words to Peter sound strange, but what he was doing was officially appointing Peter for a purpose. “And I say also unto thee, That thou are Peter, and upon this rock I will build my church; and the gates of hell shall not prevail against it. And, I will give unto thee the keys of the kingdom of heaven: and whatsoever thou shalt bind on earth shall be bound in heaven: and whatsoever thou shalt loose on earth shall be loosed in heaven.” He was appointing Peter on the spot as an official representative of the Kingdom, the heavenly embassy, the church. When we talk about authority, Jesus gave us the keys of the Kingdom of heaven. He gave us full power! We are diplomatic difference makers put here to make a global difference. We have been put here to turn our world upside down! When you show up, all power comes with you!

For A Witness Unto All Nations
The Bible tells us in Matthew 24:14, “And this gospel of the kingdom shall be preached in all the world for a witness unto all nations; and then shall the end come.” Do you realize what is being said? The gospel is going to be a part of the coming of the Lord! That’s one thing that doesn’t require any interpretation. If we want the end to come, we need to preach the gospel! This gospel is spreading all over the world like wildfire, and people are being converted all over this planet. I want you to understand how late the hour is. Most translations say the word witness in Matthew 24:14 is ‘testimony.’ The NIV says, “…as a testimony.” The ISV says, “…as a testimony.” So it can be safely said that the ‘witness’ is a testimony.
I was privileged to see one of the greatest things of our day, when our prophet, Rev. Lee Stoneking, spoke at the United Nations General Assembly. The United Nations has their own network of stations, etc., so when he addressed the General Assembly, they were viewing it around the entire world. We heard our senior ambassador say, “Repent and be baptized, every one of you for the remission of sins, and ye shall receive the gift of the Holy Ghost…” The entire world was the audience, and it was translated into six mother languages of the planet! According to statistics, 200 people were viewing that message every five minutes on the UN website. About 54 million have seen that message already! If those numbers hold strong, we are going into the millions of people who are watching the Acts 2:38 message! “And this gospel shall be preached in all the world….”
What God was actually doing with this event was of global importance. We had been having revival, but something changed when Bro. Stoneking came. Right before he spoke that day, I asked if he was nervous and thought maybe we should go over his notes. He said, “No, I’m not nervous. It will be fine, Art.” He was as cool as he could be. I reminded him the whole world would be watching. He answered, “I know what I’m going to do. I’m going to tell them my testimony, and I’m going to tell them about Jesus.” He had brought an elder spirit, and when he walked up to the stage, God took control of the entire assembly.

An Act Of God
This was the only time the United Nations ever invited global religious leaders to speak, and when it came to Christianity, only one man was representing it; Bro. Lee Stoneking! We had Muslims, Buddhists, Hindu, Jewish, Sikh, etc., but when God was ready to tell the world who the Apostolic true Christian church was, he picked a One God, Apostolic, Jesus name representative! He didn’t get some television evangelist! This is the church! This is the message! It is us and it’s always going to be us! This is the church of the living God! Only Jesus could move all of the politics out of the way and take someone who has the Holy Ghost, baptized in Jesus’ name, believes in holiness and the United Pentecostal Church, to be the representative of Global Affairs for Religion! It’s happening! As we watched that address, we knew this was an act of God! There were Muslim translators quoting Acts 2:38!

The Head And Not The Tail
In my review at the UN, they said, “We gave you the authority to work. What are you doing? You do know there is civil war breaking out in Honduras?” I replied, “I’ll go there, and I’ll handle it.” When I got to Honduras, they rolled out the red carpet, pictures, news media, etc., and put us in the Diplomatic Hotel for media interviews. So the country asked, “What are we to do, Ambassador?” I replied that I really needed to see what was going on. They took me all over the country, listening and talking to people for 3 days. Our missionaries informed me they were being kept under the heel of the government, while Trinitarian mega churches treated them like outcasts and tried to embarrass them. As I listened, God gave me a word of knowledge. I said, “Tell everybody, every denomination, every group that the UN Ambassador is here, and he’s going to address everybody.” In a day’s notice, the Diplomatic Hotel was filled to capacity with religious leaders and Mega church leaders. Our missionaries were over in the corner, but I was about to strengthen their hands! When I got the microphone, I put photos on the screen of all the global leaders who were getting baptized at the United Nations. I shared miracles that had taken place and showed them the leaders they watch on television who were now Apostolic. I told them, “When God wanted to reach the world, it was the Apostolic message that did it! I don’t know what you believe, but it’s the Apostolic message that is taking the world by storm!”
At the altar call, over 300 leaders received the Holy Ghost! Things happen when we operate within the authority that God has given us. I asked for a press release and told them I was appointing a delegate to represent them. There was no need to call us. Everything would go through that delegate. All cameras went from me to our missionary as I said to him, “It’s yours now!” And from that moment, there’s been a turnaround, and everyone is working through him. Those who were on the bottom are now on the top! God said, “I will make thee the head and not the tail.” Now they are building a full mega complex in the name of the Lord! We are ambassadors! When I operated as an ambassador should, I met no limits. You are a plenipotentiary! You have full power from the King! God is wanting us to not be afraid but to stretch our faith. What we have seen and heard is just the beginning!

Bio
Along with Rev. Art Wilson’s appointment as the UN WAFUNIF Goodwill Ambassador, he serves as Pastor of The International Church of Metro Detroit, along with his wife Bethany, three daughters, two son-in-laws and two grandchildren.