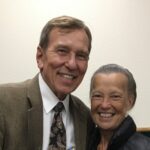 Nestled on the banks of the Kuskokwim River, Bethel is a wildly remote and challenging place. Bethel, in fact, is so remote that there is no road system to access it and the only way to visit is via plane. Most of the people living in this region are of Yup’ik (Eskimo) descent and many speak the Yup’ik language. Bethel is a hub to the most populated rural region in Alaska. There are approximately 30,000 people in a landmass the size of the State of Oregon. There are 48 villages in this area with no roads connecting. “In the winter, the river becomes a highway for truck traffic, allowing access to villages up and down the Kuskokwim River,” explains Bro. Bradbury, Pastor of Bethel United Pentecostal Church. “Bro. Chris Liu pastors a daughter work in Toksook Bay by flying there as frequently as he can. Pre-COVID, he was making weekly trips to that village 117 miles west of Bethel on the Bering Sea. Since the COVID lockdown, he has developed a telephone tree ministry, where people can call a number each Saturday evening for a Bible lesson. This also has opened the door to other villages, as anyone can call in. Bro. Tad Lindley travels upriver each week, establishing the work in Kwethluk. Since you can boat there in the summer in about 35 minutes and drive there, on the river, in about that same amount of time in the winter, he is able to take a team from the Bethel church to help with the work.”

Raised in northern Minnesota and attending Lutheran churches, Bro. And Sis. Bradbury married when she was 18 and he was 19 years old. He entered the Air Force in 1971 and was stationed at Grissom AFB. They lived in Kokomo, Indiana, and were invited to attend a Christmas program at Zion Tabernacle in Kokomo. It was there that they were baptized in Jesus’ name and received the Holy Ghost. “Six months later, we were transferred to Elmendorf AFB in Anchorage, Alaska,” explains Bro. Bradbury. “After five years in the Air Force, and three and one-half years after my conversion, I began pastoring in Hoonah, Alaska. I pastored that church for six years, before moving to Juneau, Alaska to reopen an old work that had been closed for two years. After establishing that church and completing a bachelor’s degree at the University of Alaska, we moved to Madison, Wisconsin with our five children and I completed a master’s degree in Counselor Education. From there we moved to Tupelo, Mississippi, where I served for one year as director of New Beginnings before entering the University of Mississippi and completing a Ph.D. in Educational Psychology. After graduation, I completed a post-doctoral residency in Clinical and Counseling Psychology before returning to Alaska. The purpose of the training in psychology was to put wheels on my ministry. I knew I wanted to continue mission work, but I needed to find a way to feed myself while I ministered. This has worked very well in establishing the church in Bethel. I continue with a small practice one day a week in Clinical and Forensic Psychology and dedicate the rest of my time to the pastoral ministry. Sis. Bradbury ran a daycare for ten years, then managed the Bethel Chamber of Commerce, and now is a licensed realtor, allowing for further influence in the community.”

Ancient Wisdom for a Modern World

All ministry is servitude; it’s about serving others. After pastoring two churches for six years each and leaving the pastoral ministry for five years to pursue graduate work, Bro. and Sis. Bradbury concluded that if they were going to establish a church that would outlive them, they would need to commit the rest of their lives to wherever God opened the door. “The door swung open in Bethel, and we are now nearly 29 years into the rest of our lives,” said Bro. Bradbury. “The strength of the church I pastor is without a doubt related to our commitment to walk through life with these people. I believe pastors must be servant leaders and not lords over God’s heritage. Your reward should come from seeing people grow and mature, not from what they can put in your pocket. It is essential for a pastor to have a vision of what the church is going to look like if it is going to grow, mature, and become a significant influence in a community. I try to provide the congregation with a broad spectrum of topics that address how to live a victorious life. I like to think of it as a balanced diet. The first book I authored is titled, Starting Points: A Balanced Diet for Your Church. It is a compilation of 52 sermons drawn from 52 weeks throughout the years. A perusal of that book would give some indication of the variety of subject matter I typically cover in a year. You would find topics that range from salvation, holiness, finances, disciplining children, marriage, heaven, and hell. Since 1999, I have been teaching through the book of Proverbs. In 2020, I published the first volume of what is to become a series, titled Treasures from an Old Book: Ancient Wisdom for a Modern World. I am currently preparing the manuscript for volume two. 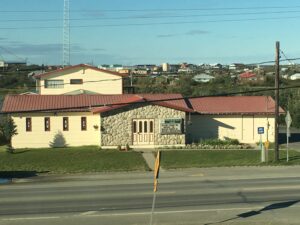 Anyone who desires to experience growth must be purposeful about it.  Revival requires work. “There are three activities that have been key to the growth of the Bethel United Pentecostal Church,” says Bro. Bradbury. “These are home Bible studies, revival meetings, and church. Most of our home Bible studies are lengthy, often taking a year to complete. I am convinced this has been key to keeping people, because home Bible studies not only instruct and disciple people, but the time spent interacting also allows the teacher to have influence in the lives of the students. The second key to growth has been long revival meetings. I usually hold three to four two-week revival meetings per year. We usually begin with Wednesday evening and conclude with two services on Sunday, taking Saturday as a rest day. I find that a revival meeting picks up momentum as the services continue. The third key is having three services a week. We still have the traditional mid-week service, plus Sunday morning and Sunday evening services. Though not everyone will make every service all the time, it provides what I call more ‘surface area.’ It provides more opportunities to touch more people. People experiencing revival want to have church.

Teamwork is an essential part of success and Bro. Bradbury encourages everyone to get on the team and get involved. “In the recent past, we held regular ‘Expanding Your Ministry’ meetings,” explains Bro. Bradbury. “In these meetings, I addressed everything from how to greet people to planning Big Sundays. COVID has upended some of this, but I am in the process of reestablishing these meetings. Our church has a Sunday School Department, a Ladies Department, a 3000-watt radio station, and two daughter works with a third on the horizon. Through the years, we have had ministries in a halfway house, the State prison, the youth facility, a ladies’ shelter, and other institutions, but COVID has closed the doors to outsiders at many of those institutions. Currently, our city has many mandates in place to deal with COVID, so once those have passed, we will regroup.”

Miracles in the Small Details 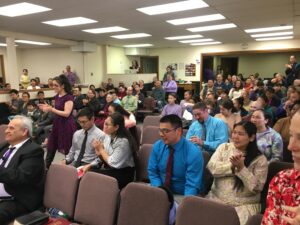 Every day is a compilation of miracles found even in the smallest details of life. “During any given service, I can look out and see people who are miracles,” said Bro. Bradbury. “Bro. Josh Craven was scheduled for a double-hernia repair, but the night before his surgery, prayer was made on his behalf. The next day to the amazement of the surgeon, the Lord repaired both hernias. In the spring of 1995, the chief of police came to me for help. His name was Chris Liu, and he was born and raised in Taiwan and practiced the Buddhist religion. His wife had begun attending our services, so I invited him to consider a home Bible study, and he agreed to do so. I thought he believed everything I was teaching him, but later I would learn that he questioned it; so he prayed, “God if this is true, send someone to speak to me in my own language about it.” Not knowing anything about his prayer, that summer at the Alaska-Yukon camp, I met Bro. and Sis. Tommy Bracken, missionaries to Taiwan. I invited them to come to Bethel and present Taiwan to our small congregation. I also wanted them to meet Chris. When they arrived, I took them to Chris’ home and in his living room, they taught him in Chinese. The next day, I noticed the chief of police on his face on the floor of that old rustic building weeping. It was two years before I would learn that the Brackens coming to Bethel was an answer to his simple prayer. Today, he is Rev. Chris Liu, pastor of the daughter work in Toksook Bay, Alaska.

During that same period, I was teaching another couple. He had a Catholic background and she was raised Russian Orthodox. Two of her brothers were ordained Russian Orthodox priests. After the first Bible study, Mark Charlie saw the truth and wanted to be baptized. When I baptized him, Anna, his wife, didn’t attend the baptism. Months went by and she made no move toward baptism. Then one day, she discovered Matthew 28:19 and came to Bible study ready to challenge me, but when I opened the Search for Truth chart, the lesson just happened to be on baptism and at the top of the chart was the question in bold letters, “WHAT ABOUT MATTHEW 28:19?” She was baptized the next night, recognizing the hand of God reaching out to her. Any of these are as great a miracle as eyes being opened or a hernia healed. They are examples of a miracle-working God working with His missionaries to establish His church.”

Building on a Solid Foundation

Bro. Joey Peyton planted the Bethel United Pentecostal Church in 1988 and left in 1992. Another pastor came for about seven months after that, but the church had been closed for four months when Bro. Bradbury arrived. “Bro. Peyton sowed much seed and left behind one solid family and property,” said Bro. Bradbury. “It was on this foundation the current Bethel United Pentecostal Church was built. The church has grown steadily through the years. We are currently in the third building since we arrived in Bethel. The building was originally built as a discothèque called the Brass Buckle. After converting the building, someone stated, it went from the Brass Buckle to the Brazen Altar. It will seat a cramped 160. We have 135 chairs in the sanctuary for most services. The record attendance has been 171. We purchased and paid for two acres of prime land next to the church in the center of town. Future plans include a new building to seat 300. There is a possibility we could break ground as early as this summer. It is our intent to thoroughly evangelize our community. With 6,700 people in the City of Bethel, we have only scratched the surface when it comes to evangelism. Secondly, Bethel is the regional hub of southwest Alaska with 48 communities scattered over an area the size of the State of Oregon. We now have daughter works in two of those communities—Toksook Bay and Kwethluk. Just recently, we were granted permission to use the National Guard Armory in Atmautluak, but just as we were to open that work, the community prohibited visitors due to COVID.  As soon as restrictions are lifted, we have a team prepared to start a preaching point there. Third, we have had a summer internship program. Any students, or recent graduates, that would like to be a foreign missionary on home soil will find Bethel is the place to do it.”