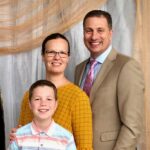 In the increasingly politically sensitive world of Northern Ireland, UPCI missionaries Joe (American) and Fanny (French) Cooney have found that their 13-year-old son, Jaylon, has a distinct advantage. Fluent in French and English like his mother, with some knowledge of Spanish, Jaylon has pursued his education in the public schools of Northern Ireland. His advantage — a Northern Ireland accent.

The key to acceptance in both the predominately Protestant Northern Ireland and the independent Republic of Ireland in the south, Bro. Cooney said, is a necessary key of missionary work that applies anywhere: “longevity.”

The Cooneys have found that “longevity, consistency, and making memories with people builds trust with them. Since our son has been raised going to school in Northern Ireland, he is more accepted by them. He speaks with a nice Northern Irish accent, too, which helps.”

Joe Cooney is a first-generation Apostolic from Ohio, and son of a single parent, an Irish-Catholic immigrant mother who later became a dedicated Apostolic. Fanny is a fourth-generation French Apostolic. Her father, Erick Nowacki, pastored a United Pentecostal Church in France, and her great uncle, John Nowacki, is superintendent of the church in Troyes, France. Whether American or French, both are considered foreigners in a nation divided by mistrust, especially of outsiders. Bro. Cooney has noted the difference in the political atmosphere from the days almost twenty years ago when he first arrived as an Associate in Missions (AIM) missionary working with the Terry McFarland missionary family. In the days before Facebook and social media, Americans were generally received much more favorably.

He served as an AIMer for three and a half years in Northern Ireland. After marrying Fanny in 2007, they moved to London where they worked under the leadership of Leroy Francis, superintendent of the UPC of Great Britain & Ireland. During their time in London, their ministry included “helping to begin a new converts’ ministry and outreach program, working with the youth group, beginning a homeless ministry, teaching countless Bible studies, and helping by ministering in each of the five daughter works of London’s Life Tabernacle.” By the time their ministry there ended, two additional daughter works had been added.

“We also began evangelizing a couple of weekends a month around the U.K. and Europe, seeing many filled with the Holy Ghost during our travels.” Two other highlights of those years of ministry were the birth of Jaylon in London and a year spent as furlough replacements in Vienna, Austria.

Brother Cooney returned with his family to Northern Ireland in 2014. It was a different atmosphere than when he had first arrived as an AIMer in Northern Ireland. As fully appointed missionaries, they were beginning a very different ministry.

After centuries-long political divisions in Northern Ireland between Protestant Scotch-Irish and the indigenous Catholic Irish, coupled with foreigners who had at times taken advantage of the kindness of locals, Bro. Cooney said, “People in Northern Ireland have become very suspicious of everyone.”

“It’s not rainbows, leprechauns, pots of gold, and shamrocks as many Americans believe,” Bro. Cooney said. “The Emerald Island actually consists of two countries: Northern Ireland, which is controlled by the United Kingdom, and the Republic of Ireland, which is controlled by the Irish government. The Republic (Southern Ireland) consists mostly of Irish citizens and in the last twenty to twenty-five years has seen much growth, with many immigrants coming from other nations to reside in it. This has to do with it being part of the European Union.”

Bro. and Sis. Cooney pastor two churches in Northern Island, while training new leaders to open works in unreached cities. He serves as a presbyter for the Northern District of the UPC of Great Britain and Ireland, an area including Scotland, along with Northern and Southern Ireland.

“Being very traditional and inclusive,” Northern Ireland “was a lot more challenging than in other European countries,” he said. “The Republic of Ireland is a lot more liberal than Northern Ireland, but both North and South have their challenges. In the last four or five years, they’ve begun to lose the rich church traditionalism that’s been there for centuries, and it seems the door has swung to the opposite end of the spectrum. Humanism, negativity, and unbelief are the main spirits we battle.”

In recent years, their focus has been to purchase church property and obtain legal status for the work in Northern Ireland while seeking new avenues of evangelism, including media outreach.

“I thank God all the time, and it still amazes me,” he said. “I actually get paid for doing what I love to do. What a calling, what a gift, what a blessing, and what a great God we serve!”