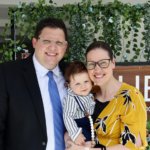 Now here is a different point of view.

Aaron and Tiffany Anderson, Indiana Bible College graduates and UPCI missionaries to São Paulo, Brazil have spent enough of their life in this metropolitan city of 23 million people that they can say, “We’ve spent so much time here, and feel so much at home, that now the United States feels more like the ‘mission field’ to us.”

When the Andersons first arrived in Brazil in 2013 on a six-month Associates in Missions (AIM) assignment in the state of São Paulo, working in a church over an hour outside the capital city of São Paulo, they did not know any Portuguese language. “It was honestly quite disorienting,” Aaron Anderson said, “not knowing how to get around, order food, and communicate, but after a lot of hard work and commitment, we began to learn the language, and now we are fluent.”

From Bible College to the Mission Field

The Andersons met at IBC and married soon after Aaron finished his Bachelor of Theology degree in 2011. Tiffany finished a two-year bachelor’s program in 2010 following two years at San Diego State University. After IBC, they spent two years in Temecula, California, where Aaron served as a youth pastor. They have one son, Grant.

Their time on AIM left them with a burden for metropolitan São Paulo, a city of 23 million people with no established UPC church within the center of the city. They felt God calling them to return to help bring the gospel to that vast urban area. With the counsel and encouragement of their spiritual leaders, including the late Missionary Superintendent of Brazil, Bennie DeMerchant, they met the Global Missions Board at the Indianapolis General Conference in 2016 and were approved as Intermediate Missionaries to Brazil. They are presently in the third year of their first term on the field.

“Life in São Paulo is like living in New York City,” Tiffany said.  “It is busy, fast-paced, and filled with traffic! We enjoy being in the city and riding the Metrorail to places we need to go. São Paulo is different in that people come here from all around Brazil to work, and they work a lot. Many times they work 12-hour days with commutes around three to four hours per day.”

They have adjusted church life accordingly. “That ends up affecting how we do church in the middle of the week,” Aaron said. “So, we end up making house visits an important part of what we do.”

What is their impression of the Brazilian people? “In general,” he said, “people in Brazil are very kind, warm, and welcoming to everyone, especially foreigners,” even if, he said, a little of that openness “is lost in the hustle and bustle of the city.”

What do they enjoy most about their life in São Paulo?

“The food and coffee here are incredible,” he said. “We also love spending time with the people, feeling their love. Seeing God move and work in the supernatural never gets old.”

Their effort has not gone unrewarded.

“We are currently starting and pastoring two churches, with plans for 2022 to open a third congregation in the city,” Brother Anderson said.  “Starting both churches during a pandemic and having to continue through all the shutdowns we’ve been forced to deal with have been challenging at times.” They have also been able to help another church over an hour and a half from them with occasional visits.

“We have the same struggles that any other church plant anywhere in the world would have,” he said, “but we are seeing growth and a structure in the churches that causes us to have great joy. Two years ago, there was no church in the city limits of São Paulo. Now there are two with about 60 to 70 faithful people. We are blessed.”

What is their vision for the future of the work in São Paulo?

“It must be by his strength and Spirit,” Brother Anderson said. “God confirms His word with signs and wonders. That must be our foundation for everything. The vision in a city like São Paulo cannot be based just around a brick and mortar structure.” Establishing a network of house churches has become their goal.

What should others do to prepare for a missionary calling?

“Don’t underestimate the preparation power of prayer before you go,” he said. “Stay close to the man of God in your life. It’s one thing to know you’re called of God. It’s another to know God’s timing. Get both right.”

How can others get involved?

“So glad you asked!” he said. “Check out aim2go.org and get in touch with us or any of the other wonderful missionaries in Brazil to find out how!”