In a dank, dark prison, Joseph laid so far from home. Betrayed, forsaken and forgotten, yet God was with him! “Your circumstances do not define who you are,” said Bro. Michael Jackson, inmate at Federal Correctional Institute McDowell in Welch, West Virginia. “The determining factor is not where you are, it’s if God is with you! The Bible says that the Lord was with Joseph and he was a successful man, so, success is not based on where you are or what your status in life is, it’s based on wether God is with you or not. It was the favor of God that made Joseph successful and that same favor is abounding in my life. I have never looked at my incarceration as a place of punishment but as a place of training so that God can use me in what he has called me to do.”

Growing up in Gary, Indiana in a gang related area and turning to the streets at an early age, Bro. Jackson found himself on the wrong side of the law. “I was raised in the word my entire life,” said Bro. Jackson. “My Father and mother were teachers in the P.A.W. church.  However, as I entered High School, I soon stopped heeding the words of my father and turned to a life of crime and selling drugs. At the age of 23 I moved to Indianapolis, Indiana thinking it would be a great change for me and that I could get my life back on track but I soon discovered that it wasn’t my environment that needed to change, it was me! Unfortunately, I started doing the same exact things, evil attracts evil, and therefore I started attracting the same crowds as before, living the same lifestyle, and it led to my incarceration in 2004.”

Introduced to Bro. Jim Sleeva from Calvary Tabernacle during their Chaplain Services Bro. Jackson received the baptism of the Holy Ghost and this began an exciting new chapter in his life. “God started using me in a mighty way in the county jail,” said Bro. Jackson.  “I started a Bible study that grew to about 60 people and 4 of those inmates received the Holy Ghost. I was then moved to the state prison and my ministry continued to grow. I started a church there that grew to around 200 inmates. God was moving mightily and used me to pray for about 30 people and they received the gift of the Holy Ghost.”

Bro. Jackson stayed in the state system from 2005-2006 and then was sent back to the county jail until 2008 when he was informed that he now faced federal charges. “I was sentenced to 30 years in Federal Prison for conspiracy to deal cocaine,” said Bro. Jackson. “Naturally, I was disappointed, but the lord spoke to me and said,  “this will lead you to your destiny.” “Sometimes you have to go through things before God can use you, and I believe he is using this to prepare me for my destiny. Ive been in federal prison since 2009. The church as a whole here consist of about 180 people with about 60 actually embracing the Apostolic Doctrine at this time. I received special permission to baptize in Jesus name from the director of prisons in Washington DC, and I’ve since baptized around 40 people and we have also had around 40 inmates receive the Holy Ghost to date. God is doing marvelous things in my life. I’m now also teaching a re-entry class [a program that prepares inmates for re-entry into society] in religious services and I’m allowed to teach the inmates the Apostolic Doctrine. Due to a law that was recently signed, without request I have been appointed an attorney and I believe that I will be released soon. I believe that God has a purpose for me and has used my incarceration to prepare me. I believe in being led by the Lord and I want to continue to walk through whatever doors he opens for me in the future, and I look forward to sharing my follow up story with you upon my release.” 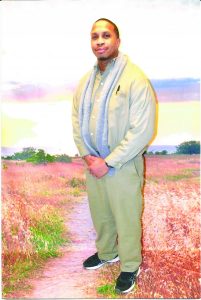