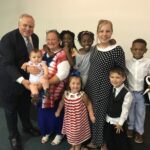 “Come join us! It is the greatest decision you could ever make.” These words can be found on the website of New Life of Albany. They seem to reverberate through time, echoing Jesus’ invitation to “Come, Follow Me.” When accepted, this simple invitation often leads to an unimagined journey of a lifetime.

Such was the case of a young man, new in the faith. “I did not grow up in church,” stated Reverend Steven Waldron. “I firmly believe my neighbors, Reverend and Sister Donald Knight, prayed me into the faith. Upon the recent acceptance of God’s call in my life, my future took a very different turn,” responded Reverend Waldron.

“My family was passionate about education and my siblings and I had been encouraged to seek this from an early age. My father, a successful businessman, fueled this expectation by offering to help pay for our education at the university of our choice. I questioned and offered God many possibilities regarding my educational route. My law school ambitions gave way to the compelling call of Bible College. I knew that was where God was directing me,” reflected Reverend Waldron.

The decision to attend Jackson College of Ministries (JCM) had its consequences as Reverend Waldron recollected. “I was told I would never see a penny go towards my education and was disowned from my family,” reflected Reverend Waldron. “I think this response was really just to see how sound I was in my resolve to follow God’s call. Through a miraculous turn of events, reconciliation was later gained with my family,” stated Reverend Waldron. The decision to follow God’s leading continued far beyond the walls of JCM.

Reverend Steven Waldron served as Dean of Theology at Indiana Bible College (IBC) in Indianapolis, IN as well as the role of a highly esteemed professor at IBC, Purpose Institute, and Excell Bible College. His teaching of Christian Evidences, Church History, and a plethora of other courses covered and continues to cover the expanse of the United States and beyond. Although still remaining on staff with several colleges, a ministry shift added a new focus in 2009.

An unscheduled weekend led to the acceptance of a speaking engagement at a church in New Albany, Georgia in 2009. “I was aware that this church was in need of a pastor, but I was not feeling any pull in that direction,” shared Reverend Waldron. “To be honest, I felt nothing in that regard as I preached in the downstairs meeting area of that church.”

Reverend Waldron expressed that he was astounded when the Presbyter of Georgia called a few weeks later and informed him that the church had voted him in as their new pastor! After prayerful consideration, Reverend Waldron and his wife, Sandi, accepted the pastorate of New Life of Albany in 2009.

“I had not grown up in a Pastor’s home, so the idea of ministry had its intimidating factors. A man of influence reminded me early on, that God ‘asks not for our ability, but rather, our availability.’ That phrase coupled with the late missionary, William Carey’s statement, ‘I may not be able to run, but I can plod,’ has helped me on this journey of ministry,” expressed Pastor Waldron. Prayer requires both availability and the determination to plod.

Known as a revival church, New Life of Albany concentrates on the aspect of prayer as its main key to revival. Pastor Waldron shared that, “Prayer is a vital component not only to church growth, but also to a Christian’s daily living. Prayer should dictate your itinerary throughout the day. There is an incredible book titled, Too Busy Not to Pray by Bill Hybels that I strongly recommend. This book seems to go against the popular current of being too busy to pray,” reflected Pastor Waldron.

“Prayer must guide the Christian believer. As a church, we focus on prayer and encourage it throughout our church services. In fact, some of our strongest and most powerful times of prayer happen during the half-hour period before the service even begins. Prayer is a reoccurring element laced within the services,” shared Pastor Waldron.

“When it comes to the body of saints working together, we try and marry natural gifting with spiritual burdens,” reflected Pastor Waldron. “In other words, an individual may have a burden for evangelism, but inviting people to church terrifies them. We have learned through time and work that burdens do not need to change due to a lack of natural gifting or talent. Rather, we find different ways for the gifting and burden to coordinate and work together. Perhaps someone too shy to talk with a new church guest has an incredible writing talent. This individual could be highly effective on the “Guest Follow-Up” team by writing a follow-up note to that guest,” expressed Pastor Waldron. 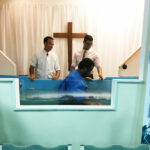 As a caveat, in regard to revival and outreach, Pastor Waldron shared that New Life of Albany refers to individuals attending a service as guests rather than visitors. “We encourage using this term to help everyone feel more welcome.”

“It is imperative that saints are placed in areas of ministry where they can be effective and successful for the working of the church body,” encouraged Pastor Waldron. “Sister Waldron and I are sure to pinpoint saints and areas of need and then provide training for them in that area,” stated Pastor Waldron.

“New Life of Albany’s first building was a renovated pottery shop,” shared Pastor Waldron. “Several years later, it seems that this building was made with the future COVID-19 pandemic in mind. It has the ability to seat about 550. High ceilings, wide hallways, and great air ventilation allow for safe gathering during this unique time,” concluded Pastor Waldron.

“We are in the process of seeking a larger building here in the city of New Albany, which happens to be the second poorest city in the nation,” said Pastor Waldron. “If attendance continues to increase before we purchase a new building, we have the option of doing multiple services on Sundays.” 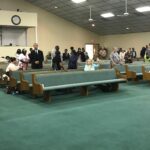 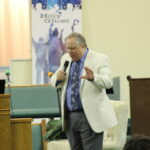 “One thing I have learned in ministry is that you must be comfortable in your own skin,” encouraged Pastor Waldron. “God asks not for your ability, but your availability. There are many incredible individuals who have not only influenced my ministry, but have proven that availability always proves stronger than ability. I am reminded of the late Brother Bug and Sister Nona Freeman. They were two individuals who literally changed the continent of Africa. No two people alone could make that kind of an impact, but they became available and responded to the call. Their availability changed an entire culture,” Pastor Waldron fondly expressed.

“My Pastor was a lifelong missionary to Africa and then the world, Samuel L. Latta.  I received a deep love for the truth from him, and how to persevere in even the most trying circumstances. Bro. Paul Mooney taught me how to love and laugh. Darrell Johns shared great insights into leadership and organization, among other things. Jonathon Urshan at Jackson College of Ministries gave me a heart of a Pastor. JCM was filled with others who impacted my life such as David Bernard and his wonderful Parents, David Reever, Sister Ruby Martin, Gordon Mallory, and Sidney Poe. Allan Oggs put a love for preaching in me, and also showed enormous perseverance. Reverend T.L. Craft showed us prayer, love, and how to dream and believe big. All these men and women also including Reverend N. A Urshan, J.T. Pugh, H.E Wheatley, and B. S. Cole have sowed into the field of my life. Every man is my superior in some way, and in that, I learn of him.”

“God is no respecter of persons. Remember to build a church rather than a crowd,” encouraged Pastor Waldron. “This can only lead to frustration and manipulation. Be honest and sincere with people. If you “seek first the kingdom of God and his righteousness,” all of these things shall be added unto you,” reflects Pastor Waldron. He adds that your response to the call could change the entire world. 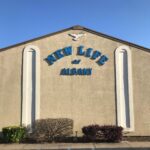 Pastor Waldron also serves as a district Presbyter in the state of Georgia and can be reached by email at stevenwaldron@att.net or by phone at 770-601-8961.