Ukrainian Christians Gather in Prayer as Attack by Russia Looms

Ukrainian Christians are asking for prayers as Russia continues to threaten to attack Ukraine.

As Russia has placed more troops along the Ukraine-Russia border, many residents in the area are preparing to flee across western Ukraine.

According to reports, there are some 130,000 Russian troops at the border. In response, Ukrainian soldiers have also begun daily drills.

“People are worried, but we encourage them to look to Jesus with all of our might because it’s only through prayer that we can keep peace in our country,” Kyzmenko Dmytro, a pastor from Lviv, told CBN News.

He said that seventy percent of his congregation is from eastern Ukraine.

“My heart right now is with my relatives I left behind in Donetsk: my mom, my sister and my grandmother, but they cannot leave this territory, and it breaks me,” said Katernyna Skudan, who managed to flee from Donetsk.

In Lviv, many Christians have gathered to pray together.

“As Christians and as people of God, it’s our job and our duty to pray for the whole world because our Lord wants peace,” said Timothy Adegbile, a Nigerian pastor.

Another pastor told CBN News: “This is ultimately a fight for freedom.”

“(Ukrainian Christians) are forbidden from having church meetings together, but they still do it,” a pastor recently told reporters. “The truth is that it’s impossible to stop the church of Jesus Christ.”

“We’re in the window when a Russian invasion could start at any time if President Putin so decides,” he said. “That includes in the coming days.”

According to reports over the weekend, talks between President Joe Biden and Russia’s President Vladimir Putin have failed to deescalate the situation.

Israeli authorities and others are also helping to prepare for thousands of Jews who may be fleeing Ukraine if Russian troops are ordered to invade Ukraine.

In a statement on Sunday, Israeli Prime Minister Naftali Bennett encouraged Israelis living in Ukraine to leave as soon as possible.

The news comes as reports of thousands of Russian soldiers being stationed at the border continue. 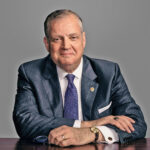 The president of Southern Baptist Theological Seminary in Louisville, KY, made the comments after Christianity Today noted that many believers no longer see gambling – especially sports betting – as a vice. Only 36 percent of Christians in a 2016 Lifeway Research survey said betting on sports is morally wrong. The article quoted data predicting that this year’s Super Bowl would see a record 31.4 million Americans bet on it.

Sports betting has ballooned in recent years thanks to the growth of companies such as DraftKings and FanDuel – in addition to professional leagues’ embrace of them.

“Evangelical Christianity has been very energetically opposed to gambling as a gross moral ill,” Mohler said on The Briefing, his daily podcast. “But you wouldn’t know that looking at many evangelicals today who think it’s a non-issue, or they would define it as a victimless crime, or they would simply… make ridiculous comparisons such as arguing that gambling on a football game is about the same as buying a stock on the stock market.”

A California father lost custody of his transgender-identifying 16-year-old child after declaring his opposition to hormone therapy and after the judge asked the dad if he believes transgenderism “is a sin,” according to a new report.

The father, Ted Hudacko, expressed unconditional love for his biological son in court proceedings before California Superior Court Judge Joni Hiramoto, who continually asked the dad if he could affirm the child’s self-identity. The child, a biological male, identifies as female and prefers they/them pronouns.

Because of the father’s position, he eventually lost all parental rights, with no ability to see his child and no right to stop any medical treatments that could leave the child permanently infertile, according to the report. The case began in 2019 but became public this year.