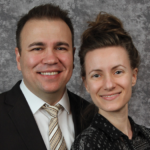 Tanya (Balca) Hajduk, a 2000 graduate of Indiana Bible College, was born on the mission field when her parents, retired UPCI missionaries Sam and Pat Balca, were young, self-supporting missionaries based in Germany in the late 1970s.

Her parents had previously assisted missionary Fred Tenus in Vienna, Austria. Her father and Brother Tenus made secret visits to Oneness believers who gathered for unauthorized worship inside communist Eastern Europe

Many of those Oneness believers residing in the former Yugoslavia were converts of Tanya’s grandfather, Jan Balca, the early pioneer of Oneness Pentecostalism in Eastern Europe and as far west as the eastern border of France.

By the time Tanya was in her early teens, the Soviet Union had collapsed in 1992 and Christians were free to worship in Eastern Europe where her parents were continuing their outreach as fully appointed UPCI missionaries based in Vienna. The smaller nations that had made up the former Yugoslavia gained their independence with new borders defined not only by ethnic, but also political and religious divisions largely among Orthodox, Catholic, and Muslims.

One young Pentecostal convert in the new nation of Serbia was Radovan Hajduk. Radovan first met Tanya at a UPC youth camp in Serbia. He was a Croatian national born in Serbia. Their friendship continued by correspondence when she enrolled at IBC and he traveled to the States to attend Gateway College in Florissant, Missouri. He finished his studies at Gateway the year before Tanya graduated from IBC in May 2000. They married that fall and moved to Ontario, Canada.

Within a few years they were serving as Associate in Missions (AIM) volunteers in Eastern Europe. They received their full missionary appointment to Croatia and Slovenia in 2009. Like Tanya’s parents and grandparents, they have continued the tradition of reaching into unevangelized towns and cities where religious tradition is strong, but Bible knowledge is almost completely nonexistent. They have accepted the calling of the long and sometimes lonely ministry of pioneer evangelism.

From her childhood, Tanya embraced a call to become a missionary to Eastern Europe, a God-given direction that preceded her enrollment at IBC and her engagement and marriage to Radovan. Her husband sees that calling, and the single-minded determination to fulfill her calling, as a central element to Tanya’s missionary life in Croatia and Slovenia.

“First of all,” he said, “what’s made her an effective missionary is her understanding that she’s called to be a missionary there, regardless of being married to me. That was always in the back of her mind. Being pioneer missionaries, when the going got tough, when we were lonely, and when we failed over and over again — she just stuck through it, because there was absolutely no Plan B. It was a ‘this or die’ kind of thing with Tanya. She can’t think of life outside of that, whatsoever.”

They quickly realized that patient and tedious soil preparation would be needed before the seed of the gospel could be effectively planted in those nations.

Both were greeted somewhat suspiciously as foreigners and “Americans” when they arrived as fully appointed missionaries. Their ethnic origins were of little help, and even Radovan’s native Croatian language now bore a suspicious accent. They learned that conducting church services in a rented hall, or even attempting to teach Bible studies, was of little value until they very patiently and lovingly gained friendships and slowly established acceptance in their community of villages on the outskirts of Zagreb, Croatia and other locations. The first stage of their work was going to take not months, but years.

Radovan found that bringing his wheelbarrow to help an elderly widow with her winter firewood proved to be a first tool of evangelism, or helping a farmer in the field. Tanya experienced great joy in preparing meals for those who were beginning to tentatively attend simple church services. Serving meals at her kitchen table, she knew, was a cultural imperative for reaching souls. One important morsel of advice she would give to young ladies in Bible college who feel a call to missions: “Learn to cook.” Fast food is not an option in much of the world, she noted. Secondly, she said, “Be strongly grounded in the Word. You have to have your own walk with the Lord.”

These were neighbors completely ignorant of the Bible message, even though their communities were overshadowed by centuries of religious tradition. It was a slow process, but loving connections made by serving home-cooked meals or helping neighbors led to open hearts for the Word. Truth that was lived, they found, had to come before truth could be effectively preached.

The groundwork has paid off, and they are eager to further develop established congregations where they preach and worship either in English, Croatian, or Serbian.