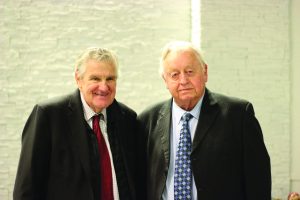 The steps of a good man are ordered of the Lord. Bro. Mooney loves his family in the way we all should. Also, his love for his church was with an outstanding and unique quality. I was amazed to see how deep his feelings were. The call to preach meant everything to him. Every year at Bible school there was a new crop of Mooney wannabes’ and I find that to be the case across the country wherever my travels lead me. Their near hero-worship caused many to listen in on Calvary’s service to catch the preaching on the internet. Bro. Mooney and I were friends long before my 18-year connection with the school. I never misunderstood our relationship. He was always boss, yet we were in a sense brothers. When the snow got deep enough with a blizzard blowing in my phone would ring and he would say something like “What are you, a wimp? Can’t you take a little snow? Get your Louisiana self out here. We need to cut some ruts in the snow.” I would say, “I will be right out there. I didn’t figure you were tough enough for this kind of weather.” Then we saw how quickly we could get stuck and have to dig out. (I will always miss these times.)

I remember the time we went to play golf and bad weather blew in from someplace. All were rescheduling or getting their money back which left Bro. Mooney and I standing in front of the counter. I said, “Well what are we going to do?” He said loud enough for all to hear, “Well, I came to play golf myself.” I responded with, “I intend to play, I was just checking to see what you planned to do.” People watched us leave in the sleet and snow, our cart and golf bags had a cover of ice on them. We played all 18 holes. As we came into the clubhouse a crowd was there to see us come in.  It took a while for us to recover from the cold and near pneumonia.

Folks across the country are so glad to hear Bro. Mooney is not retiring but just rerouting his ministry. Or let me say God is redirecting his steps. Preachers are asking me if I would help in getting Bro. Mooney to come to preach in their churches. I say, “The line is already long but I will pass the word to him.”

Bro. Mooney is an interesting man in the pulpit. He, as far as a lot of us are concerned, has no equal. He is the T. De Witt Talmage – the Henry Ward Becher – the Charles Spurgeon of our day.

Let me digress, in the last few years he and I have been able to preach together at some camp meetings. We were together in North Dakota and he said, “O.C. after you get through with your session in the morning, let’s go for a ride.” As we were going along on a long road that one would think that buffaloes still roamed, I said, “Let’s get lost.” He turned quickly down a side road that looked almost unused. The farther we traveled, the less the road was visible.  He said, “I think we should try to turn around.” My response was, “Paul, I am surprised at you. Are you losing your nerve?” He responded, “Can’t you see that bong hole in front of us? I don’t think we can make it through without getting stuck.” I said, “Well who cares if we can’t?” So, he gunned it and we slung mud and twisted through. Within a mile, we ran out of road with nowhere to turn around. There was a drop off on one side and bean field on the other. He said, “Hold on, I am taking the bean field.” Spinning, roaring, and bumping we got out and back on our way only taking out a small part of the bean field.

But on the more serious side, I realized one morning in class something was wrong with me physically, which turned out to be my heart, to which the doctor informed me that there was nothing he could do to help. Then later, the doctor said, “Let me go in and look for any way I might be able to help you in some way.” But before I went in for the procedure, we were having a healing service at church. Upstairs before the service was to begin, we that were to help with the service met for prayer. As we started down, Bro. Mooney said, “Folks, Bro. Marler needs a touch from the Lord. Let’s pray for him before we go to the service.” As he laid hands on me, I felt something across my heart. The doctor said the next week after I awoke, “God has done something wonderful for you.” That all happened many years ago, but I have not forgotten the man who knew what the Lord wanted.

I laugh with him; I joke with him, but I never forget that he is an anointed man of God. Oh yes, I remember so much that I don’t want to forget. Such as the cold evening I sat in the car while he carried a homeless man money. I can still see the man laying on the cold alley concrete reaching up as Bro. Mooney handed him down some money. Bro. Mooney said when he got back to the car, “I went to school with him.” Oh yes, I remember when Bro. and Sis. Mooney unexpectedly walked into our little ole country church the day, we buried my mother in Louisiana.

I was allotted by the editor a thousand words to pen my thoughts of Pastor and Sis. Paul Mooney. But when I think of all the students who came through IBC in the last 30 years and the fond memories they have, why, it would take a barrel of ink and a million pages to enumerate all their memories of years gone by. Thank you, Sir and Ma’am. Sorry that we didn’t have the words we need to do you justice.

Thanks for allowing us to walk in your ordered steps.