“Sing O barren, enlarge the place of thy tent, and lengthen thy cords” were the words of Isaiah 54:1-2 that the Lord gave to Rev. Yram Lopez, Pastor of the United Pentecostal Church in Shelbyville, TN (SUPC). He thought, “Why am I worshipping and praising when I’m barren, and nothing is going right? Why would I do that if we are going to remain barren?” However, as he read those scriptures, it was clear to him that the Lord was preparing them if they would trust Him and make space for Him to move, and that understanding changed everything. 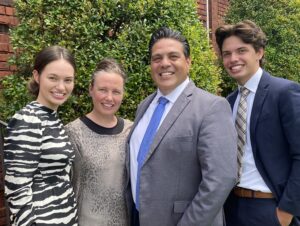 “There are many aspects that are integral to the growing church,” said Pastor Lopez. “God must be at the epicenter of everything we do. To be soulwinners, we must be soul-lovers and a praying church. Trusting the process isn’t always easy but is essential to becoming, rather than just being. We must die to self, placing our wills and agenda on the altar and pursuing His will, building a foundation of basics and consistency that moves us beyond a Sunday afternoon shout.”

When Pastor Lopez assumed the pastorate, God gave him direction for the church to pray. The acronym was F.A.R. They were to pray for favor and access to the community as well as resources to carry out the mission. When the church prayed, all of those things abounded.

He served as Associate Pastor to Rev. Jim Blackshear in Anchorage before coming to Tennessee to take the home missions church in Shelbyville. “We’re probably the most diverse church in our community,” he said, “And we’re intentional about that. Our leadership looks like our pews. In this community, that’s a big deal.”

“Two years ago,” said Pastor Lopez, “The words ‘sing O barren’ didn’t make sense, but the next verse speaks of enlarging your tent and lengthening your cords. Our present facility has 10,000 square feet. Before that, we were in a storefront by the Piggly Wigley with 1,200 square feet, and it wasn’t full. But we found that as we make space, He’s filling it up.”

Pastor Lopez feels that the principle of unity toward one another before God is crucial to revival. He noted that in Acts 4, the place was shaken where they were assembled. The unshakable began to be shaken. He said, “Strongholds come down when we’re unified.” Another principle is that of discipling people to recognize their harvest field, and that has been done through Bible studies and prayer. He explained, “We’ve had a mighty move of God in our Fire Department, the Police Department, and in saints’ places of employment. Prayer and fasting are the bedrock of it all, so we have weekly corporate prayer to engage the people. We have a ladies’ prayer meeting and 24-hour prayer on Saturday for our Sunday service, and I’ve taught Bro. Mangun’s series on praying through the Tabernacle, Heaven to Earth.” He feels strongly that a pastor’s priorities should be prayer, discipleship, and connection in the community. He said, “In a very short time here, leaders in the community have opened up to me. I work part-time at the Fire Department and serve as their chaplain. I pray at City Council meetings, and I’m part of the CISM team for the State of Tennessee, helping first responders and communities after disasters. God has opened all of that for us.”

The church broadcasts its services online. They feel that increase has really come from sowing the seed. Heavy investment in advertising, etc. wasn’t financially feasible for them as a home missions church, but they knocked doors and did prayer walks in the city. And, they have IBC’s group, Chosen, do a concert every Spring, followed by a powerful youth revival service that night. 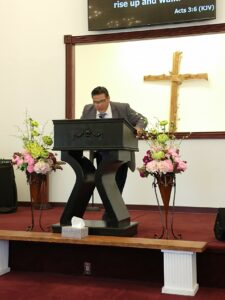 Departments of the church include Children’s Ministry, Vision Student Ministry, Worship, Discipleship Training, Media team, Small Groups, and Prison Ministry. After the Prison Ministry door opened, other churches in the city were given one month of Sundays a year. SUPC was asked to come weekly.

Pastor Lopez has annual and quarterly planning sessions with his leaders. The group leaders have job descriptions, and planning is done onsite. Pastor Lopez uses his own training for his leaders and gives access to Ministry Central for those who feel a calling upon their lives.

The percentage of those involved in some type of ministry is thirty percent. Ten to fifteen are involved in evangelism, and Pastor Lopez teaches, preaches, and disciples about involvement. To this end, he does weekly discipleship classes in his office with a small group of new people.

The church has had a number of healings and miracles. A man named Bro. Phil was terminal and had come to Shelbyville to die. They prayed for him during a Sunday night service, and the power of God moved on him. The following Wednesday night, he showed up weeping. Pastor asked him if he was okay. He replied, “Am I okay? I just came from the doctors, and I have a brand-new heart. I have the heart of a teenager! The doctors said it was pounding in me.” 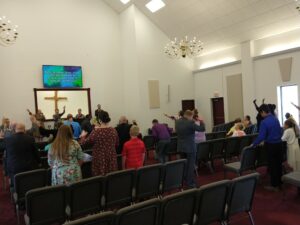 “I try to lead by example and wouldn’t ask anyone to do what I’m not willing to do,” said Pastor Lopez. “And I always want to be compassionate, genuine, and transparent.”

He enjoys preaching on faith. But Pastor Lopez also enjoys preaching on the love, mercy, and grace of God even more. He explained, “In this day of brokenness, we must show people the love of God and let them know that He is so in love with them. Only Jesus believed you were worth dying for.” He has such a burden for prodigals and understands them, because he was raised in truth and baptized at age thirteen, but spent many years not living for God. He also has a burden for those of other denominations of Christianity.

The current property of 10,000 square feet, which sits on two acres, was purchased five and a half years ago. It was worth over three times what they paid for it. It was fully furnished and included a fellowship hall, office furniture, sound system, etc.

Pastor Lopez said, “We needed more room and saw this lonely, sad-looking church building with only a handful of cars there on Sundays. We prayed about it, and it was prophesied that the building would be ours. My realtor told us to come to look at the property, but only between 3-4 p.m. We wondered why we were to visit at that specific hour, and we were told that the pastor drove a school bus. The board had not told him they were selling the building, and they wouldn’t tell him until it was sold. Pastor Lopez said, “That’s not how we operate.” He continued, “So, we let it go and didn’t do anything but pray. Then, they came back to us and said they told the pastor and were going to give him a severance package, but they doubled the price. I said, “That’s not going to happen.” I prayed that the Lord would deal with them, and my realtor called a week later and said, “Their realtor called me. They want to know what that Pentecostal preacher is doing to them, because they’ve not been able to sleep.” A couple of weeks later they dropped the price, and we signed the contract to purchase the property.”

The sanctuary seats 150, but they anticipate expanding, because the Lord keeps taking Pastor Lopez back to Isaiah 54. Over the past year, during COVID, they had fifteen people come in and either receive the Holy Ghost or were baptized. When Bro. Lopez became pastor, the attendance was around thirty-five. Presently, they have doubled. 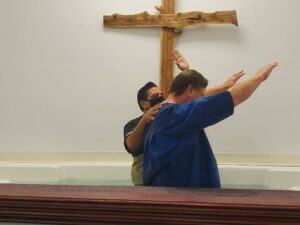 “You’ll Be Okay with the Answer”

Pastor Lopez was born in California but raised in Anchorage. He received the Holy Ghost at age five. He had a successful career he loved in the Fire Service in Anchorage, serving as Battalion Chief. With a degree in Fire Science, being a firefighter was all he had ever wanted to be.

Then, Rev. Eli Hernandez came to their church to minister. “He called me out regarding a calling on my life,” said Pastor Lopez. “The next year, he called me out again and reiterated what he had said. Upon the prompting of the Holy Ghost, he poured an entire bottle of oil over my head. I thought, ‘There is no way!’ Earlier, I had assured my wife-to-be that I wasn’t going to be a preacher! I was a fireman!

“In 2003, around the birth of our son, the impressions became more frequent and forceful. The Lord said, ‘You can either tell your son about it, or you can show him.’ My grandfather had pastored for years before he passed away, so I went to my grandmother to talk to her about what was happening with me. In response to every reason that I gave as to why I couldn’t be a preacher, she would answer that my grandfather was like that. I told her I couldn’t say anything without crying, and she said, ‘Your grandfather wept every service!’” Shortly after receiving direction from his pastor, Pastor Lopez acknowledged his calling.

In 2010, his father-in-law, Bishop Philip Swinford, who had retired in a neighboring city at seventy-nine years old, felt the call to reopen the church in Shelbyville. So, he went before the Tennessee District Board to start a church there. He told Bro. Lopez that he felt like he was the one to eventually pastor it. Years went by, and he never pressured him, but would ask every time he visited, “Anything yet?” Bro. Lopez would always reply, “Not yet.”

Bro. Lopez said, “In January 2014, I went to the campground to pray and fast for an answer regarding Shelbyville. On the way home, the Lord said, “You’ll be okay with the answer.” He reminded me that he had placed a man of God in my life and asked, “What does he say?” In the subsequent meeting with my pastor, I explained what God had told me and then said, “If you say, don’t go, I’ll never mention Tennessee again, but if you say ‘go,’ I’ll go.” A few months later, I retired from my job in Alaska and came to Shelbyville to pastor. At the exact moment in August 2014, as I was introduced as pastor, every fire truck, ambulance, and police car in the city went flying by with lights flashing and sirens blaring. I asked for a moment as I watched my life go by in lights and sirens, thinking, “What am I doing here?” Then I heard someone in the back say, in a way only southerners can, “Bless his heart!”

Of the many who influenced his ministry, the most influential were Bishop J.R. Blackshear, Pastor Jim Blackshear, Evangelist Eli Hernandez for his mentorship and divine impartation, Bishop Philip Swinford for his example of loving souls, Rev. Jack Tidrick and Rev. Kevin Page, who were friends when he needed one most. His favorite preacher is Rev. Jim Blackshear, and his favorite author is Dr. David K. Bernard.

A Love for Travel and Family 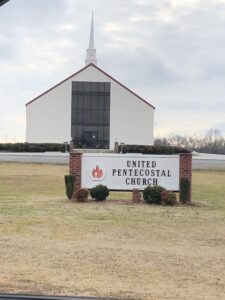 Pastor Lopez loves traveling with and hanging out with his family and their dog Maize, riding his Harley, and playing golf. The one thing people can’t seem to figure out is what a Mexican from Alaska is doing in Tennessee.