While your plight was probably not leprosy, it was sin that caused division from the community of Christ. This is a wonderful month to lift our voices and give praise to the One who has ‘called us out of darkness and into His marvelous light’ (1 Peter 2:9)

“And it came to pass, as he went to Jerusalem, that he passed through the midst of Samaria and Galilee” (Luke 17:11).

Nameless and homeless, their debut on the stage of Luke’s writing was contingent upon their most highly disdained attribute: leprosy. “Alone” was the term used in Leviticus thirteen to describe how they were meant to spend an indefinite amount of time after diagnosis. Ten men, each individually forced from homes and communities, were ushered to the edge of society. What a ragtag group of outcasts they must have been. A group of guys who might never associate until unified by isolation when they were forced from familiarity to the fringe.

Consider the inception of their personal plight. None of these men would have volunteered to bear such a debilitating disease. What issue or exposure made them vulnerable to this sickness? Readers are left to consider the fearful expressions of family members left unwritten between the lines of the text. Can you picture the bloodshot eyes of a wearied wife looking back and forth from the apprehension in the eyes of her husband to the white spots on his arm? Listen closely and you can hear the frantic cries of a young boy. His voice pierces the air, begging his dad not to go away… but there is no other choice. Heading into an uncharted future, the father is forced away, unable to protect his family for fear he may infect them. Echoing through the community upon their exodus, folks could hear the dreaded words reverberating through the still air as each leper lamented, “unclean, unclean.” Dignity was left behind, as the distance grew between both home and hope. 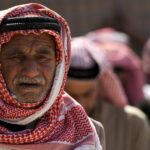 However, Christ, the healer of the hopeless, makes an intentional trip to the fringe, passing through the midst of Samaria and Galilee. Although diseased, the debilitated band of lepers were even more determined. Those sentenced to be alone found not only company, but unity. As a result, not just one, but together “they lifted up their voices, and said, Jesus, Master, have mercy on us” (Luke 17:13). Initially, it seems so underwhelming that you almost miss the lepers’ role in the healing. Staying directly in line with His Word, Christ simply sends them to the priest for examination. “And it came to pass, that, as they went, they were cleansed” (Luke 17:14). For a mixed bag of men, Christ’s simple instruction was enough for them to change the direction of their walk. When they chose to trust His word enough to walk toward the priest, their healing came. One man, a Samaritan no less, helps us all with an eternally etched example by turning back and glorifying God in Christ for the cleansing. From that time until now, we have shared the story of a leper that went from healed to whole by glorifying God in Jesus Christ.

As we know, November is recognized as a month of thankfulness. While stopping to give thanks for the blessings of God should not be relegated to a particular month, I’m thankful for the existence of the tradition and the focus it brings. We, God’s children, have much to be thankful for. Some reading this article associate more with the lepers from the story than others. While your plight was probably not leprosy, it was sin that caused division from the community of Christ. This is a wonderful month to lift our voices and give praise to the One who has “called us out of darkness and into His marvelous light” (1 Peter 2:9). May we all continue to allow Him to direct our steps, and may we never fail to bring glory to the Lord Jesus Christ for what He has done.

Maybe this Thanksgiving would be a great time to recognize someone who’s been living on the fringe and invite them to dinner. Yours might be the voice that helps them change their direction.