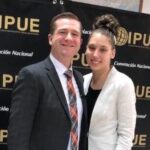 Jared Driggers, UPCI missionary to Spain and a 2012 graduate of Indiana Bible College (IBC), has the distinction of being the first teaching assistant of Dean of Missiology Robert K. Rodenbush, and Missions Club president. Both he and Bro. Rodenbush began their tenure at IBC in 2010

Training and Preparation for the Mission Field

It was under the guidance of Bro. Rodenbush and his late wife, Evangeline, that Jared Driggers and his wife, Jeanna, later focused on Spain for an Associate in Missions (AIM) assignment in 2017 under the leadership of missionaries Nathan and Tanya Harrod. The Driggers received their full missionary appointment to Spain in 2020. That close bond with Robert Rodenbush as mentor and friend has continued since that close association began at IBC.

“I do not know how to adequately express the lessons I learned from Brother Rodenbush while at IBC,” Bro. Driggers said. “Many things were taught, and perhaps more was even caught. I can hear him say, ‘Always do the right thing, the right way, because it’s the right thing to do.’ Simple advice really, but that’s the man he is. He practices what he preaches, and it inspires everyone who has been blessed enough to work with him. I often have told people that I have never worked near someone who, from just being around him, makes me want to be a better Christian, both in lifestyle and service, like he did.”

Undoubtedly more than a coincidence, Bro. Driggers and his future wife, Jeanna, first met as teenagers on an Indiana District missions trip to Trinidad and Tobago. “I look back now and can’t deny the hand of God on us meeting on the field, where the Lord began to deepen that burden for missions for both of us,” he said. “Years later we would both begin college at IUPUI. I would eventually finish my degree at IBC and she would go to nursing school. She came to visit the school on more than one occasion while I was there, and the one class she visited was one of Bro. Rodenbush’s missions classes. I don’t remember which one, but he did give everyone an AIM application in that class. We still had that application six years later when it was time to answer the call to go to the field.”

By then, IBC had established its Missiology program with Robert K. Rodenbush as dean. It was only natural for the Driggers to sit down with Robert and Evangeline Rodenbush for some guidance on that AIM application that they had saved.

“While we felt a burden for Spanish speaking nations, we did not feel a burden for a specific country. We sought direction from Bro. and Sis. Rodenbush because of their knowledge of global missions and the needs of specific areas,” he said. “Together in sharing our thoughts and burden and gleaning from their insight and advice, we felt comfortable with the three choices for our AIM application. The Lord seemed to shut down two of the options rather quickly, but the door was opened to us in Spain. We immediately felt peace with continuing to Spain. It was not long after we arrived that we knew the Lord had guided us to the specific field in which He desired us to labor.

Under the leadership of the Harrods, the Driggers’ time in Spain has been both productive and personally fulfilling as his summary of their ministry in and near Barcelona reveals.

“We arrived in Spain June 1st of 2017. Combined with our time as AIMers and Associate Missionaries, we served on the short term missions program for nearly three years.” The Harrods, he said, “are tremendous leaders. Both allowed and encouraged us to dive in and serve in any capacity we could. We got to see and be a part of what seemed like the entire process” from conversions to discipleship training at various levels.  Sis. Driggers helped by handling church finances. Her husband taught in the Bible school while also teaching home Bible studies. Eventually they were instrumental in opening a new church in the city of El Prat not far from Barcelona. The church now leases a building in downtown El Prat.

“If you take the bus through the city, you will pass Los Pentecostales de El Prat,” Bro. Driggers said. “Locally and nationally we simply served in whatever way we could and in whatever way the Lord directed.

Advice for The Next Generation

His advice to others who feel a call to global missions? “Pray. Submit yourself to the authority God has placed in your life. Service and submission will place you in position to hear the voice of God. God honors motive. Faithfulness in small things opens doors to greater things. Then follow Him each step through open doors.